Well recognized for its streaming music platform, Spotify (NYSE:SPOT) has proven a great success story so far this year, as its stock price has nearly doubled on the back of strong subscription data. Yet Spotify offers more than just music; its focus on expanding content categories mirrors how we are changing the way we consume information. And that change makes all the difference for Spotify's future.

The coronavirus pandemic has meant more time at home for all of us -- and highlighted a long-term shift in how we watch and listen to the things that entertain us. Rather than waiting for traditional TV broadcasts and radio shows to air at set times, people are moving toward enjoying those programs on-demand. Over the past year alone, for example, Spotify experienced a 31% increase in overall users. From 2017 to 2020, the company's total monthly active users grew from 131 million to 286 million, and its total revenue doubled.

Spotify also has a strong strategy for converting ad-supported free users to premium subscribers, which is significant since the gross margin for premium users is higher than for free users. While the company employs several conversion tactics, the most notable is its subtle and insistent interruption of the immersive, free user experience, which encourages users to upgrade to premium in order to make their experience perfect. As a result, the company successfully manages to convert an eye-popping 60% of its free users to higher-margin premium accounts. Accordingly, over the past three years, the number of paying subscribers has increased threefold, contributing heavily to its increasing revenues. 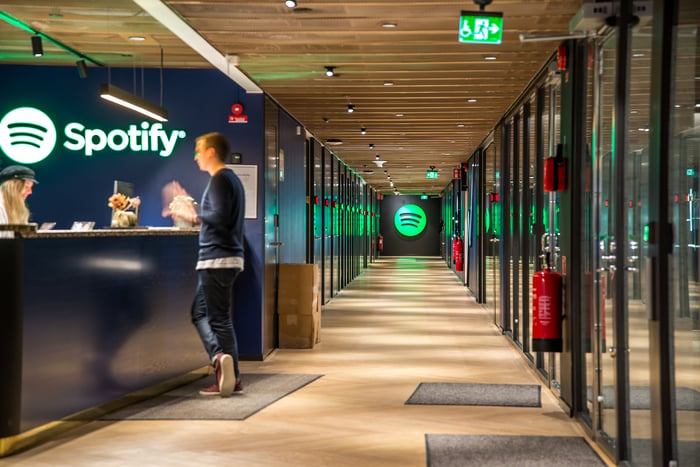 Once, we bought CDs or downloaded music we wanted to hear. Now music streaming has become the new norm, and streaming competitors have correspondingly crowded the market. Nowadays listeners can choose from Apple (NASDAQ:AAPL) Music, Tidal, Pandora (NASDAQ:SIRI), and even Amazon (NASDAQ:AMZN) Music, forcing Spotify to search out new avenues of growth.

That growth has come in the form of podcasts, a once-languishing subsector of on-demand audio content. Spotify invested early and heavily in podcasts, launching Podcasts for Spotify in late 2018 with the intention of diversifying its revenue streams. By 2019, the company aimed to be the first major player in podcast content, and its platform now hosts more than 1 million podcasts, outstripping nearly all competition around the world.

Why is this important? In fiscal 2019, Spotify's podcast listening hours increased by 200%, suggesting that podcast streaming is a growing driver of increasing engagement and retention.

Indeed, recent quarterly data indicates that workday morning consumption of podcasts has increased to resemble previous weekend levels. This supports the idea that podcasts are a huge draw for listeners. Embracing digital media has let us consume more songs and podcasts faster than ever, and our desire for content on meaningful, educational subjects is growing by leaps and bounds. So becoming the No. 1 source for podcasts provides a huge added value, which can entice potential users over to Spotify's platform instead of its competition.

In order to stay ahead of its fierce competitors, Spotify invests heavily every quarter in content acquisition and production, as well as improving user experience. So it may not be a surprise that the company has posted net losses for years now, despite growing total revenues.

However, it has largely maintained positive free cash flow (FCF), which seems earmarked for further self-investments. Only once in nine years did the company's FCF go negative, purportedly owing to timing shifts in license payments for its music segment.

Obviously, streaming music comes with very high costs of service, and Spotify has worked hard since it went public to increase its margins. In the first quarter of 2017, its gross margin was a mere 11.7%; by the first quarter of 2020, gross margin had increased to 25.5%. At the same time, Spotify kept posting operating losses, but its operating margins improved from (15.4%) to (0.9%). Increasing gross profits and shrinking operating losses strongly suggest that the company is growing more efficient over time.

When it streams music, Spotify has to pay a cut of the resulting revenue to artists, publishers, and labels. But Spotify gets to cut out that extra expense with most podcasters, because it pays them nothing; instead, they make money by selling ads, merchandise, and tickets to live shows. And if it does pay a podcaster -- like the popular Joe Rogan, with whom Spotify recently signed a multiyear deal worth a rumored $100 million -- it gets exclusive rights to their podcast in exchange, removing that show from rival services. Podcasts use Spotify to grow their potential audiences; Spotify uses podcasts to attract more users, increase the value of the ads it sells for free users, and boost its number of paying subscribers -- all of which increase the company's margins.

Right now, only a small portion of Spotify's total users listen to podcasts. But that percentage grew from 16% to 19% of monthly active users in the three months between fourth-quarter 2019 and first-quarter 2020. With enough time, podcasts have the potential to outshine music as Spotify's primary content.

Furthermore, ad support for podcasts will offer even more avenues for revenue growth. Omnicom Group (NYSE:OMC) has committed to spending $20 million on Spotify podcast ads in 2020, which constitutes nearly 0.25% of the company's maximum expected total revenues for the year -- not bad for a single source of ad revenue. And with U.S. advertisers expected to increase their podcast ad spending by 21% between this year and 2021, Spotify's pursuit of this segment shows excellent growth promise for the future.

By diversifying toward thought-provoking, on-demand content, Spotify is able to capitalize on streaming services in a way that could eventually rival audiobook consumption or other non-video content services. The company entered the market early and quickly, and with the potential inherent in its content expansion, Spotify has found a growing avenue for increased revenues that could lead to good things for itself and its investors.