Buying cheap dividend stocks is a great way to secure better-than-normal dividend yields while also locking in a lower average cost for your investment. That can set you up for some capital gains down the road to go along with all that income you'll be earning from regular payouts.

Below are two dividend stocks that can provide your portfolio with some great recurring cash flow and that aren't expensive buys right now:

Pfizer (NYSE:PFE) is a terrific dividend stock to add to your portfolio for many reasons.

The first is that the healthcare stock pays dividends of $0.38 every quarter, which means it's yielding around 4.3% per year -- well above the 2% you can normally expect from the average S&P 500 stock. 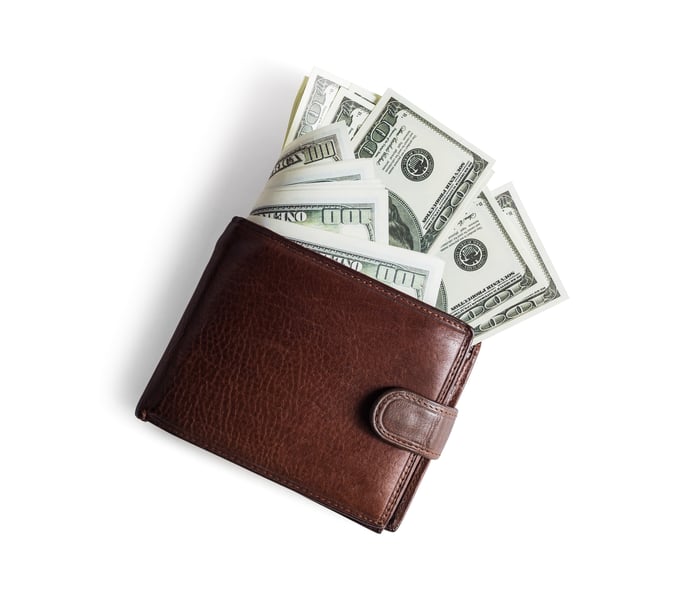 Pfizer's a big name in the pharmaceutical industry and it has been a lock to post strong profits in recent years. In 2019, it netted a profit of $16.3 billion, which was more than 31% of the company's sales of $51.8 billion. The year before that, its profit of $11.2 billion was 21% of revenue.

The New York-based company is going through some significant changes, so it will soon look different. Its Upjohn business segment, which includes off-patent drugs, is spinning off with Mylan and its consumer healthcare business has partnered with GlaxoSmithKline in a joint venture.

But that's also part of a third reason to buy Pfizer -- these changes will allow the company to focus on higher-growth products that should make the company's financials stronger than they've been in recent years. In 2019, Pfizer's sales were down 3.5% and in 2018 they grew by just 2%.

Pfizer's stock is cheap. The stock's trading at a modest 12 times its earnings over the past four quarters, which is a fairly low multiple for a stable healthcare stock that's been increasing its dividend payments annually since 2010.

American Express (NYSE:AXP) is another solid dividend stock to add to your portfolio. The credit card company (which is also based out of New York) is facing a bumpy road amid COVID-19 as a weak economy translates to fewer transactions processed on its network, leading to a decline in sales.

When the company released its first-quarter results on April 24, it had already begun to feel some of those effects as revenue net of interest expense was down 1% year over year. CEO Stephen Squeri said, "the deterioration in the economy due to COVID-19 impacts that began in the first quarter and accelerated in April has dramatically impacted our volumes."

However, for dividend investors, the stock's still a solid long-term buy. The economy will recover and transaction levels will rally, and perhaps even soar, as consumers may look to make up for time lost due to the COVID-19 pandemic. That's one reason the stock's a great buy -- if the economy does well, so too will American Express.

Currently, the stock pays investors a quarterly dividend of $0.43, which on an annual basis yields about 1.8%. The company's also been increasing its dividend payments every year since 2012.

American Express is a bit more expensive than Pfizer, trading at a price-to-earnings (P/E) multiple of 14, but that's still below a P/E of 15 which many value investors typically consider to be a good deal. 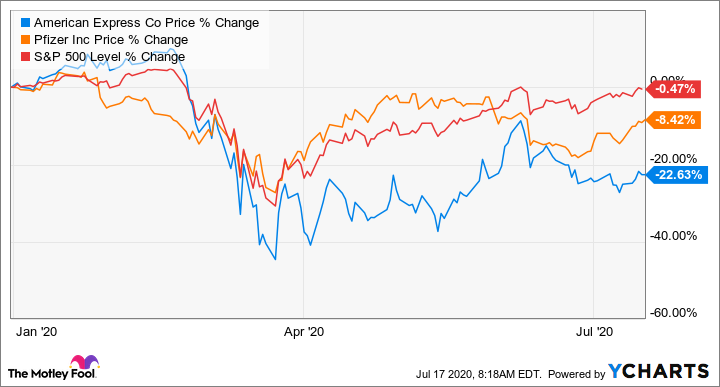 Investors are bearish on financial stocks given the concerns surrounding the economy, so it's no surprise that American Express stock is suffering the largest losses at this point. While it's likely to recover, it may be some time before that happens.

Pfizer offers a better dividend, is a cheaper buy, and it's also a safer investment right now, making it the better stock to buy today. However, when looking at the long term, both stocks are still solid investments.