Please ensure Javascript is enabled for purposes of website accessibility
Log In Help Join The Motley Fool
Free Article Join Over 1 Million Premium Members And Get More In-Depth Stock Guidance and Research
By Keith Speights – Jul 19, 2020 at 8:12AM

He's more likely to be "jumpstart Joe." And these stocks appear poised to win big-time if the presumptive Democratic nominee wins the presidency.

If you think the U.S. will soon legalize marijuana at the federal level, you're not alone. Canopy Growth CEO and former Constellation Brands CFO David Klein expects that it will happen in 2022. I've speculated that marijuana could be legalized nationwide as early as next year.

But could presumptive Democratic presidential nominee Joe Biden be putting the brakes on the pot legalization train? Some might think so after reviewing recommendations from a task force that the former vice president formed along with Sen. Bernie Sanders. However, there's more to the story. 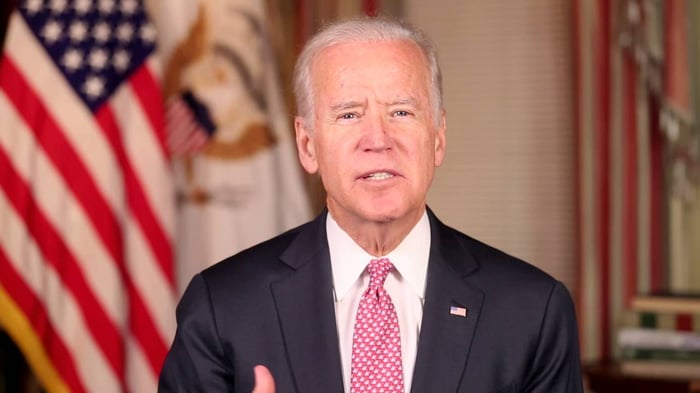 The Biden-Sanders "unity task force" created a 110-page document chock-full of policy recommendations across a wide array of issues. Among the issues that the task force considered was marijuana legalization. Anyone hoping that the team would recommend full legalization of pot in the U.S. probably came away a little disappointed after reading the task force's document.

The task force called for the decriminalization of marijuana using executive action. This includes automatically expunging all previous marijuana convictions for the use and possession of marijuana. In addition, marijuana would be removed from the list of offenses for which individuals can be deported from the U.S.

There were no recommendations to completely legalize marijuana at the federal level. Will Biden will be "slow-mo Joe" when it comes to legalization if he adopts his task force's recommendations? Not really.

For one thing, the task force did express support for the federal legalization of medical marijuana. Also, the task force's document stated that "states should be able to make their own decisions about recreational use." It added, "The Justice Department should not launch federal prosecutions of conduct that is legal at the state level."

Let's assume that Joe Biden wins the Democratic nomination for president as expected and defeats President Trump in November. If he adopts the recommendations of the task force, the U.S. cannabis industry will almost certainly expand more rapidly than ever before. Biden is more likely to be the "jump-start Joe" of marijuana legalization than "slow-mo Joe."

The door just might soon open up for major Canadian cannabis companies such as Canopy Growth to expand into the U.S. market. But I think that U.S.-based multi-state operators will be in an even better position for tremendous growth. Two in particular that I expect will be ready to roar under a potential Biden presidency are Cresco Labs (CRLBF 5.45%) and Green Thumb Industries (GTBIF 1.08%).

Cresco and GTI are already delivering impressive revenue growth. Both companies are based in Illinois, where the recreational pot market is booming. Each company is also enjoying fast-rising sales in Pennsylvania's medical cannabis market.

Even without changes to federal marijuana laws, Cresco and GTI appear to be in a great position to build momentum. Cresco's acquisition of Origin House earlier this year gives it a strong presence in California, the biggest marijuana market in the country. GTI owns 96 retail cannabis licenses but has only opened 48 stores so far, giving it plenty of runway to expand.

I also think that there are fantastic investing opportunities among picks-and-shovels companies that support the cannabis industry. GrowGeneration (GRWG -3.05%) looks like one of the most attractive among this group. It was the best-performing marijuana stock in the first half of 2020 thanks to sizzling revenue growth.

My hunch is that GrowGeneration will keep up its winning ways. The company currently operates 27 retail hydroponics and organic gardening stores in 10 states. It recently raised $42 million in gross proceeds in a stock offering that provides funds to add new stores.

As is the case with Cresco and GTI, GrowGeneration should be able to deliver solid growth even under the status quo. But if medical marijuana is legalized throughout the U.S. and the feds recognize state marijuana laws under a Biden administration, I think that the sky's the limit for this stock.

Keith Speights has no position in any of the stocks mentioned. The Motley Fool owns shares of and recommends Constellation Brands, Cresco Labs Inc., Green Thumb Industries, and GrowGeneration. The Motley Fool has a disclosure policy.