Please ensure Javascript is enabled for purposes of website accessibility
Log In Help Join The Motley Fool
Free Article Join Over 1 Million Premium Members And Get More In-Depth Stock Guidance and Research
By Anne Burdakin – Updated Jul 21, 2020 at 9:46AM

That's why I like rock-solid companies like AbbVie (ABBV -5.96%) and Johnson & Johnson (JNJ -0.71%) for investors looking for dividends. Both companies have great businesses well positioned for the future, and it is highly unlikely either will have problems paying its dividends. Let's look at each business more closely.

Reasons to be in AbbVie: valuation and dividend yield

There's a lot to like about pharmaceutical firm AbbVie's 4.8% dividend. The company has had 48 consecutive years of dividend increases and a three-year dividend growth rate of 22.6%.

AbbVie's stock price has been held back due to future uncertainty about losing exclusivity on its blockbuster immunology drug Humira in 2023. But that eventuality is being outweighed by good news on several fronts, as the company is filling its pipeline with promising new treatments.

On June 10, AbbVie announced a collaboration deal with Danish company Genmab. The companies will collaborate on three anticancer antibodies that will ultimately allow the delivery of a therapeutic toxin directly to cancer cells while sparing normal, healthy cells. AbbVie is paying $750 million up front and up to $3.15 billion later, if the development programs succeed.

AbbVie acquired fellow drugmaker Allergan in a deal that closed in May, which bolstered AbbVie's offerings with lucrative treatments such as Botox. While Botox is well known as a cosmetic procedure drug, it is also useful in treating a variety of medical conditions.

On July 9, Allergan announced that the U.S. Food and Drug Administration (FDA) had approved a supplemental Biologics License Application (sBLA) that supports expanded use of Botox for the treatment of spasticity in pediatric patients, including those with lower limb spasticity caused by cerebral palsy. 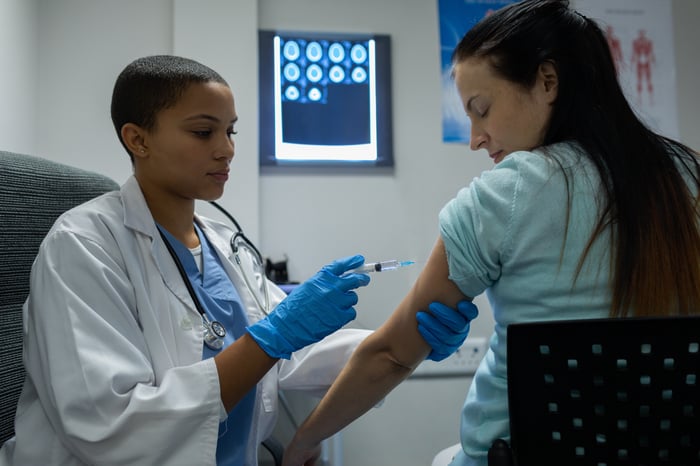 Other, newer drugs in AbbVie's arsenal that Wall Street is optimistic about include Skyrizi and Rinvoq. Analysts expect Skyrizi, which treats psoriasis and other autoimmune disorders, to grow annual sales from about $1 billion to $4.4 billion by 2025. Rinvoq, which treats arthritis and eczema, is expected to grow from a few hundred million a year now to $3.7 billion in 2025.

AbbVie has built a substantial oncology franchise with Imbruvica and Venclexta, which generated combined revenues of nearly $5.5 billion in 2019. Strong double-digit growth is expected in 2020.

AbbVie's price-to-earnings ratio is 17, well below the industry average P/E of 34, and its price/earnings-to-growth ratio is 0.66, indicating that AbbVie shares are undervalued.

Besides the company's growing dividend, strong demand trends for Humira in the United States, an impressive portfolio of new drugs, and continued strong sales performance of Imbruvica and Venclexta are some solid reasons to own the stock.

In April, Johnson & Johnson increased its dividend for the 58th consecutive year, this time by 6.3%. Its dividend now stands at 2.7% and will probably continue to increase yearly based on the company's business outlook.

On July 17, Johnson & Johnson posted second-quarter results, widely expected to be the most brutal of 2020. The company ended up beating estimates for both earnings and sales and raised its adjusted earnings and sales outlook for 2020.

The COVID-19 health crisis affected Johnson & Johnson's business segments in varied ways. The pharmaceutical unit saw sales increases in oncology drugs and psoriasis treatments, but the slowdown in patient visits to doctors hurt sales of some physician-administered drugs. In the consumer health segment, skin care and beauty sales suffered due to social distancing, while over-the-counter medicines and oral care increased. The medical devices unit was hit the hardest due to the stoppage of elective surgical procedures, but the decline wasn't as severe as expected, and the company now expects a lower-than-previously forecast decline for the second half of the year.

Johnson & Johnson sees the financial outlook improving for the rest of 2020 due to better-than-expected performance in medical devices as global economies recover. Management revised their forecast for the negative sales effects of delayed procedures in the medical devices unit, lowering it to $3.8 billion-$5.3 billion from the $4 billion-$7 billion expected earlier. Management also sees continued strength in the pharma segment and higher growth in the consumer health unit.

Finally, the company is a player in developing a coronavirus vaccine. In fact, the U.S. government has given $456 million to Johnson & Johnson for that purpose, while the company has invested another $500 million in the project. If successful, a vaccine would be a significant growth driver for the company.

Johnson & Johnson is the kind of dividend-paying investment likely destined to reward investors royally over the coming years. The stock price is up only 2.4% this year, and I think it has plenty of room to run.