The next stimulus package that passes could include substantial savings for working Americans.

The COVID-19 problem is not going away. With cases surging throughout the country and talks of lockdowns being imposed once again, it's clear that Americans need financial relief to get through the ongoing crisis.

In March, the CARES Act provided an initial dose of relief. It called for, among other things, a $1,200 direct stimulus payment and a $600 weekly boost to unemployment benefits. But much of that stimulus cash has already been spent, and the $600 weekly boost that's been keeping jobless Americans afloat is set to expire at the end of July. Therefore, lawmakers need to put their heads together to come up with a second stimulus deal, and quickly.

Of course, we don't know whether a follow-up relief package will, in fact, include direct stimulus checks or boosted unemployment. But we do know one thing: President Trump is insisting that the next deal include a payroll tax cut. Here's what that means. 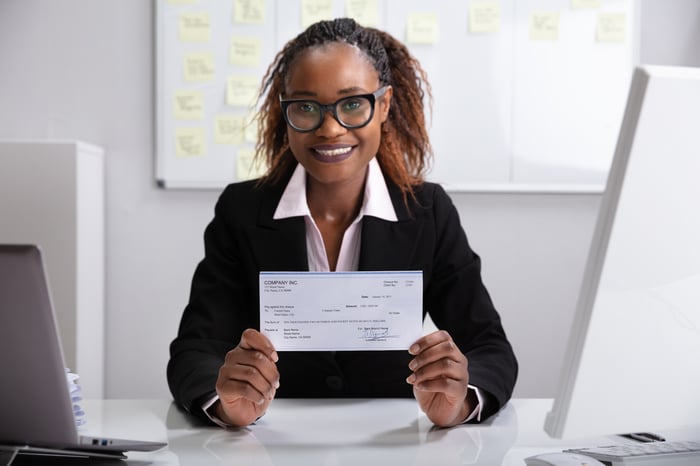 How would a payroll tax cut impact you?

While President Trump is calling for a payroll tax cut, we don't know if that means that no payroll taxes will be in effect for a specified period of time, or if workers and employers will simply pay less payroll tax. But in either scenario, there could be significant savings involved.

Imagine you earn $5,000 a month and pay $310 a month in Social Security tax, while your employer pays the same. Let's also add $72.50 in Medicare tax that would normally apply to that wage. If the payroll tax is eliminated completely for the rest of the year, it would put an extra $382.50 a month in your pocket.

In fact, it's easy to argue that a payroll tax cut could take the place of a second stimulus check, since both effectively serve the same purpose: putting more money directly into people's bank accounts. Furthermore, easing that burden on employers could result in substantial savings -- savings that might translate into fewer layoffs for cash-strapped businesses.

Still, any payroll tax cut that comes out of a second stimulus deal will be temporary in nature, and while it might help to some degree, just as those initial $1,200 stimulus checks helped back in April, when they first went out, that alone may not be enough to get Americans through the ongoing crisis. It's too soon to tell exactly what our next stimulus deal will amount to, but we may learn more this week as lawmakers reconvene in the Senate to hash it out. Either way, let's hope that the relief it provides is meaningful enough to make an impact during this very difficult time.