This off-the-radar British conglomerate got a big endorsement from the EPA in July. But is it enough to buy the stock?

With the outbreak of the COVID-19 pandemic this winter and the resurgence of the virus in southern states this summer, it appears that certain trends are here to stay through the rest of the year. These include video-conferencing, e-commerce, electronic payments, and, of course, home sanitization.

While several disinfectant brands have flown off the shelves this year, only one disinfectant brand was recently officially approved by the Environmental Protection Agency as having been effective against COVID-19. The brand became the first to achieve this status on July 6, after the EPA had time to conduct laboratory tests directly on the novel coronavirus. 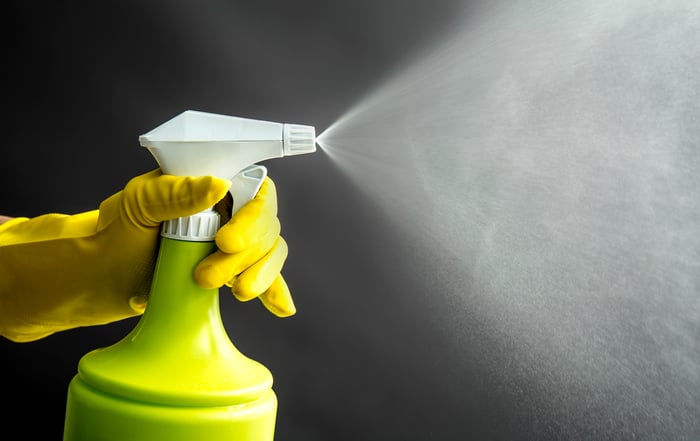 That should be music to the ears of shareholders of British consumer staples company Reckitt Benckiser Group (RBGL.Y 1.12%), which makes Lysol disinfectant spray, among other personal hygiene brands such as Woolite fabric cleaner, Calgon water softener, and Finish dishwasher soap. Aside from personal hygiene brands, RB's largest segment is actually its health segment, which contains brands such as Clearasil skin solutions, Mucinex cough medicine, and Durex condoms. Finally, the company has a smaller segment in infant nutrition.

Lysol is part of the company's hygiene segment, which made up around 38% of the company's sales in the first quarter. Unsurprisingly, that segment did well, with sales increasing 12.8% in Q1. That was powered by Lysol's strength, with CEO Laxman Narasimhan saying that Lysol sales were up a whopping 50% in the quarter.

Yet Lysol wasn't the only star of the portfolio; RB's health segment was up an even greater 13.6% in Q1. Management pointed to continued strength in health brands Dettol, Mucinex, Nurofen and VMS -- however, some of that was likely due to stockpiling at the end of March, as customers bought up on necessary goods amid quarantines.

Yet even today, in a recent interview, Narasimhan said that demand continues to be strong. For instance, the company is now making 20 times more hand sanitizer in July than it was at this time last year. While those rates may not maintain for the long term, Narasimhan does see demand for certain hygiene products settling in at higher levels than before COVID, as people generally become more aware of their hygiene and the environment around them.

Should you buy Reckitt Benckiser?

Before investors take out their wallets and buy RB based on the recent EPA approval, there are a few things to consider. First, just because the EPA has only officially approved Lysol as effective against COVID-19, the EPA isn't saying it's the only product that's effective. Due to the constraints around getting COVID-19 virus content for safe testing, the approval means that Lysol is the first product to have actually undergone these tests; it doesn't mean it's the only one that's effective. In fact, in the news release, the EPA said that it expects to approve additional products for approval against COVID-19 in the coming weeks once lab tests are done.

So that doesn't necessarily mean Lysol is any better than, say, Clorox (CLX 1.79%) disinfectant wipes or other rival products. It's just that Lysol was the first to be approved.

Still, I think the demand for disinfectants is strong enough to lift all boats in the category, and there are other reasons that RB could still make a solid defensive dividend pick, even after its strong run this year. RB currently trades around 25 times forward earnings and pays out a 2.6% dividend. That compares favorably to Clorox's forward P/E of 32 and 1.9% dividend yield.

A turnaround underneath the COVID trend

Before COVID, RB had actually been struggling for growth. That led it to bring in Narasimhan as a new CEO one year ago, poaching him from PepsiCo (PEP 0.91%), a top-performing staples company over the past few years. Coming into the company, Narasimhan undertook a big restructuring initiative earlier this year to make its business more efficient and accelerate growth. While it's unclear if those initiatives contributed to the recent positive results, these efforts probably didn't hurt.

Narasimhan's plan entails a temporarily lower margin as the company invests in a two-year productivity program, after which it will expand again. Before the outbreak, Narasimhan's goals were for RB to achieve mid-single-digit revenue growth and EPS growth of 7%-9% over the longer term.

As such, RB looks like it could very well be a compelling turnaround story underneath the recent COVID-19 surge. With a cheaper valuation than its better-performing competitors and the chance to increase its execution, investors shouldn't overlook this British giant as part of a defensive consumer staples portfolio allocation -- especially with its shiny new EPA approval in hand.

McCormick & Company Is Determined to Expand

Will I Regret Selling Reckitt Benckiser?

Should You Buy Reckitt Benckiser Today?

Is Now the Time to Buy Reckitt Benckiser Group?
395%