The Apple enterprise platform soared in its public debut.

In recent years, Apple (AAPL -1.51%) has been making steady progress in the enterprise, partnering with companies including IBM, SAP, and Cisco, among others, to expand its enterprise offerings. Corporate bring-your-own-device (BYOD) programs have also been proliferating, giving the Mac maker another inroad thanks to its popularity among average consumers.

That's been a boon for Jamf (JAMF -2.16%), which operates an enterprise management platform for Apple devices. Jamf shares hit the public market today after the company priced its IPO at $26 yesterday evening. The deal was upsized due to strong investor demand, with shares opening 77% higher at $46 this morning. Here's what you need to know about Jamf. 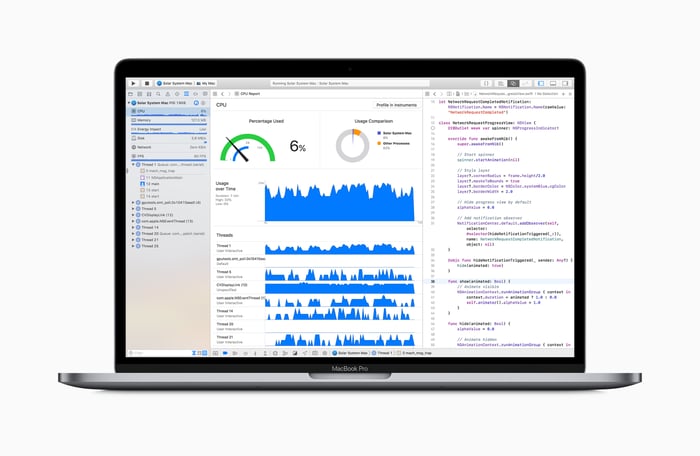 Jamf was founded in 2002 by Zach Halmstad and Chip Pearson, right around the time when Apple's turnaround was taking shape -- the original iPod had just been introduced the prior year. Halmstad was a student working in a college IT department helping manage Mac deployments for both students and faculty. Halmstad and Pearson served as co-CEOs before passing the torch to IT vet Dean Hager, who was named CEO in 2015.

The company focuses exclusively on Apple devices, helping enterprise customers deploy and manage Macs across their organizations. Jamf utilizes the software-as-a-service (SaaS) model that investors know and love, charging a monthly subscription fee that ranges from $2 per month to over $7 per month for various tiers that come with different features catering to small businesses (Jamf Now) to large enterprise IT teams (Jamf Pro). There are also offerings for educational institutions (Jamf School), authentication and identity management (Jamf Connect), and cybersecurity (Jamf Protect).

As of the end of the second quarter, Jamf's platform had grown to over 40,000 customers managing 17 million Apple gadgets in 100 countries. As Apple products continue to gain momentum in the enterprise, Jamf's growth has accelerated: Over a third of those customers got on board in the last 18 months alone.

Jamf points to an IDC survey of U.S.-based commercial IT decision makers that shows 11% of deployed laptops are Macs, but that figure is expected to rise to 14% within the next two years. At the same time, the COVID-19 pandemic is accelerating a broader shift to remote work, which increases demand for mobile device management (MDM) systems and other tools for remote management.

Total revenue in 2019 jumped 39% to $204 million, of which nearly 80% was subscription revenue. The company still spends heavily on sales (35% of revenue), which is pretty normal for enterprise software companies. Research and development gobbled up another 21% of the top line, and Jamf posted an operating loss of $20.3 million and net loss of $32.6 million last year.

SaaS investors will also be familiar with other common metrics for SaaS companies. Annual recurring revenue (ARR) at the end of the first quarter was $224.9 million, up 40% year over year. Jamf is still finalizing its Q2 results but believes ARR last quarter was in the range of $238 million to $241 million.

Back in 2017, private equity firm Vista Equity Partners acquired a majority stake in Jamf and through a variety of various funds owned nearly 90% of shares outstanding immediately prior to the offering. Vista is retaining majority control of Jamf following the IPO, wielding 75% to 77% voting power depending on whether underwriters exercise options to purchase more shares.

That means public investors will effectively have no say over how Jamf is run or who sits on the board of directors. Furthermore, Jamf's bylaws are structured in a way that allows Vista to unilaterally designate the chairman of the board as long as it has just 30% voting power, as well as designate all board nominees if it keeps 40% of the shares it currently has; Vista doesn't necessarily need majority control to have considerable influence.

What's next for Jamf?

Jamf raised nearly $320 million through the offering and plans to use the bulk of that cash to pay down $205 million in debt under an existing term loan facility. The rest will be used for general corporate purposes, and Jamf finished the first quarter with $22.7 million in cash and cash equivalents.