Please ensure Javascript is enabled for purposes of website accessibility
Free Article Join Over 1 Million Premium Members And Get More In-Depth Stock Guidance and Research
By Jamal Carnette, CFA - Jan 12, 2021 at 7:08AM

Long-term investors can position themselves for success with this Apple-enabling stock.

Earlier this week, Apple filed its 2021 proxy statement, including its 2020 executive compensation report. Considering the strong returns Apple stock produced last year, it's no surprise that Apple's C-suite executives are in for a nice payday.  The cash incentive pool swelled to 179% of the target payout, netting CEO Tim Cook a tidy sum of $10.7 million -- a 40% increase over 2019's payout -- due to hitting sales and operating income targets.

What's important, though, is why Cook earned this outsized pay package. According to the Wall Street Journal, sales of primary computing devices like laptops and iPads powered the bonus pool. In fiscal 2020, revenue attributable to Apple's Mac category significantly accelerated -- from 2% year-over-year growth in the prior year to 11% in 2020 -- due to pandemic-related purchases by businesses and students forced to remain at home.

While this trend boosted Cook's wealth last year, the long-term trend toward a work-and-learn-from-anywhere environment will continue, and Apple enterprise specialist Jamf Holding Corp. ( JAMF -1.79% ) is in a prime position to make long-term investors rich. 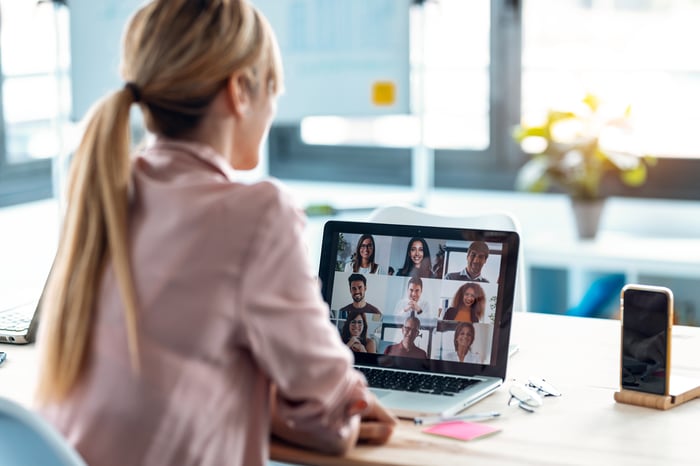 Jamf has struggled for reasons not entirely of its own making

If you're unfamiliar with Jamf, that's understandable. The company bills itself as an Apple enterprise management specialist, which is a fancy way to say its software helps ensure businesses, schools, and governments can access to the critical databases employees and students need while protecting their networks from threats and unauthorized access. Apple has been aggressive at taking on Microsoft for enterprise business in recent years. According to the research firm Frost & Sullivan, the Apple enterprise market is estimated to grow from $10.3 billion in 2019 to $23.4 billion by 2024.

Despite this backdrop and being a work-from-home tech IPO stock, Jamf shares have underperformed. After an initial day pop from the IPO price of $26 per share to close above $39, shares have languished and now trade below $35 per share as of this writing.

Jamf has a complicated history, and that appears what to have investors worried in the short term. For decades Jamf resisted filing for an IPO, a trend that became popular as private equity began to move forcefully into the venture capital space, making capital plentiful and easy to come by. In 2017, Jamf was acquired by Vista Equity, a private equity fund led by billionaire Robert Smith. Even after Jamf's IPO, Vista retained greater than 60% ownership. Soon after the IPO, the IRS announced Smith had admitted to tax evasion and had signed an agreement to pay $140 million in taxes and penalties.

While it's important to note Jamf was not implicated Smith's IRS issues, the company has been unable to reverse the narrative that it remained private too long past its growth stage and finally went public in haste to ensure Vista and Smith had the liquidity needed to quickly raise cash. That's why shares of the company harshly sold off when Vista sold a part of its position in November.

Despite the strong growth, at $261.5 million in annual recurring revenue, the company continues to have a long runway ahead. The company's has done an amazing job of landing new customers, and boasts a client list that includes 24 out of the top 25 most valuable global brands. Once Jamf lands a customer, it is more likely to expand its offerings than lose the customer, as evidenced by the company's dollar-based net retention ratio of 117%.

The pandemic might be ending soon, but the shift to a work-from-anywhere environment is just getting started, and Jamf will continue to benefit as Apple continues to catch up to Microsoft in the space. In the short run, concerns about Vista's exit strategy could continue to hang over the company but the long-term opportunity remains intact. Investors would be wise to pay attention to Jamf and buy on any significant dips.

If You Like Apple Stock, You Really Need to Check Out Jamf