Marathon Petroleum (NYSE:MPC) has spread its network of 3,900 "Speedway" gas stations and convenience stores across 36 states in the union. Now, Marathon is gearing up to sell the whole kit and caboodle -- and bidders are getting in line.

As Reuters reported Wednesday, at least four potential buyers are preparing to submit bids to acquire Speedway from the oil refinery company: 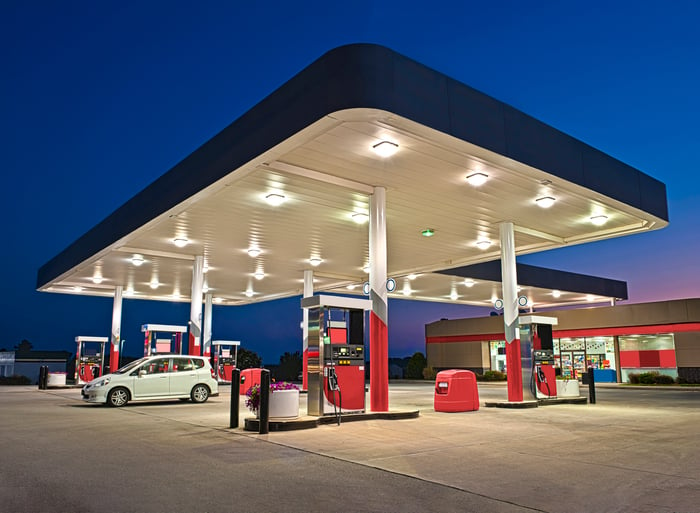 7-Eleven owner Seven & I Holdings (OTC:SVND.Y) already has America's biggest chain of gas stations-cum-convenience stores -- 11,800 of them. Acquiring Speedway would only increase its lead. Seven & I tried to buy Speedway in March for $20 billion, but now may get a chance to acquire it for as little as $15 billion to $17 billion.

Canada's Alimentation Couche-Tard (OTC:ANCU.F), which includes the Circle K brand of filling stations in its holdings, already operates a 9,400-strong chain across the continent. Couche-Tard seeks a private equity partner for its bid and aims to split up Speedway after acquisition to avoid raising antimonopoly concerns by growing too big, too fast.

Private equity firm TDR Capital -- which originally intended to support Couche-Tard's bid -- is now preparing to make an all-cash offer on its own.

Finally, Murphy USA (NYSE:MUSA) is pondering a bid that could theoretically quadruple its size by adding Speedway's 3,900 locations to its own 1,300.

If these bidders fail to offer a price it likes, Marathon says it will spin off Speedway to its own shareholders as a separate company in a transaction to take place by the first quarter of 2021.