Please ensure Javascript is enabled for purposes of website accessibility
Log In Help Join The Motley Fool
Free Article Join Over 1 Million Premium Members And Get More In-Depth Stock Guidance and Research
By Nicholas Rossolillo – Jul 22, 2020 at 9:20AM

Purchasing luxury goods businesses during a recession? It may feel wrong, but…

It might be considered questionable behavior by some, but purchasing shares of luxury goods and fashion house LVMH Moet Hennessy Louis Vuitton (LVMUY -1.43%) amid the coronavirus crisis has worked out pretty well so far in 2020. After plummeting some 30% in late March along with the rest of the market, the stock has rallied and is up 1.5% this year to date -- capping a more than 160% run over the last five years. That's in stark contrast with other fashion brands like Coach and Kate Spade parent Tapestry (TPR -1.59%), which is down 51% so far this year.

Granted, LVMH shares aren't exactly cheap. Amid the pandemic, the global middle class that is the real driver behind the luxury brand's growth is taking a big hit. Nevertheless, for investors who think showing off one's financial means will make a rebound in the not-so-distant future, one could do far worse than LVMH. 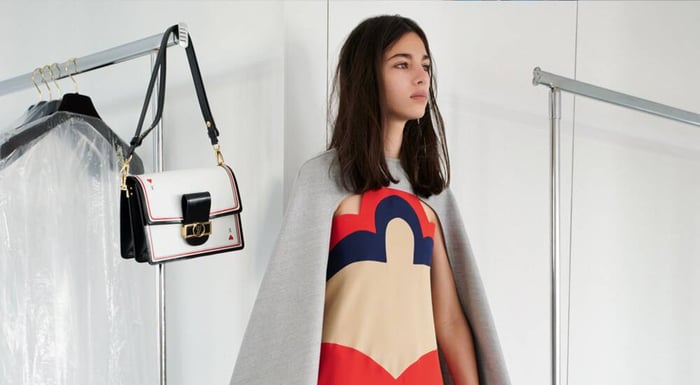 Far from perfect timing to make an acquisition

2019 was a great year for LVMH. Total revenue and free cash flow (revenue less cash operating and capital expenses) increased 10% and 13% to 53.7 billion euros and 6.17 billion euros, respectively -- driven by gains in the flagship Louis Vuitton and related fashion and leather goods segment. Things took an unsurprising turn for the worse to kick off 2020, though. With China (Asia minus Japan makes up nearly a third of the company's sales) and later Europe bearing the brunt of COVID-19 earlier than the U.S., revenue fell 15% from a year ago in the first quarter. The company also cut its dividend payment by 30% -- on one hand not great news for shareholders, but on the other a vote of confidence that the company remains on solid footing amid the pandemic and can continue paying a dividend at all.

However, another mark against purchasing the stock now is the timing of its purchase of Tiffany & Co (TIF). LVMH agreed to buy the American jewelry outfit for $16.2 billion last year, premium pricing considering the jeweler's sales are likely to take a substantial tumble. LVMH should be able to plug Tiffany into its own jewelry segment and squeeze some extra profit out of combined operations once it's all said and done, but debt was raised to pay for the takeover. At the end of Q1, LVMH had $14.2 billion in debt and $6.36 billion in cash and equivalents. It isn't a terrible balance sheet, but it will lower the company's profit margins that much more (since more debt means more interest payments) at a time when the bottom line will be scrutinized amid the global recession.

However, this stock is a solid bet on global consumerism. China and its emerging middle class is a high-growth market that is already rebounding from the effects from its lockdown, and the rest of the world should follow suit sooner or later. And LVMH being headed by the world's third-richest person, Bernard Arnault (the Arnault family owns 47% of outstanding shares), doesn't hurt either.

As of this writing, the stock trades for 25.9 times trailing-12-month free cash flow -- a metric likely to get worse in at least the next quarter or two (maybe more) as LVMH laps its stellar results from last year. It's not exactly cheap and this is already a massive global conglomerate valued at nearly $250 billion, so I'm personally in no hurry to buy. Nevertheless, whatever your views on fashion names may be, it's hard to deny this is a premium stock amid premium brands. With momentum on its side, it's at least worth leaving LVMH Moet Hennessy Louis Vuitton on your watch list as coronavirus-era financial results roll in and the world starts to recover.