Investors were in a frenzy Monday morning after Pfizer (PFE -0.15%) announced early positive results from a potential coronavirus vaccine it is studying in partnership with BioNTech in a phase 1/2 trial held in Germany. Pfizer is collaborating with BioNTech on four potential vaccines in a program called BNT162, which includes one of its most advanced candidates, BNT162b1.

Preliminary data from the German study found that subjects experienced varying degrees of CD4-positive T-cell responses to BNT162b1, while 29 of 36 participants had CD8-positive T-cell responses to the receptor-binding domain of SARS-CoV-2. (Both CD4 and CD8 are types of white blood cells; the former are on the forefront of battling infections in your body, while the latter can be fatal to cancer cells and other attackers.) Shares of Pfizer were up nearly 4% in the early morning trading hours of July 20.

Pfizer certainly isn't the only cook in the kitchen vying to win the coronavirus vaccine race. AstraZeneca (AZN -1.10%) also reported on Monday that its coronavirus vaccine candidate with Oxford University produced a positive immune response in subjects during early stage human trials. Companies like Inovio Pharmaceuticals (INO 1.23%), Moderna (MRNA -3.64%), and Novavax (NVAX 0.47%) are just a few examples of other industry giants going head-to-head with Pfizer to get an effective vaccine to market.

If you're one of the many investors tracking Pfizer's coronavirus vaccine progress, you could be considering whether now is a good time to buy. You might also be wondering if it's still too risky given uncertainty about the effectiveness of a potential vaccine in late-stage trials. Here's what you should know before you buy shares of this pharmaceutical stock. 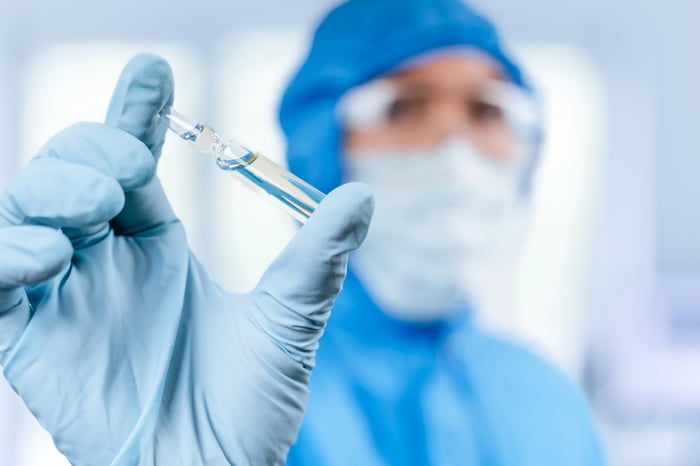 Pfizer first announced it was collaborating with BioNTech on a coronavirus vaccine on March 17. Pfizer's research, production, manufacturing, and regulatory prowess make an ideal marriage with BioNTech's proprietary mRNA vaccine platform. Pfizer agreed to issue up to $748 million in payments, and BioNTech will reimburse Pfizer for half the costs associated with developing the vaccine, if and when it hits the market.

Investors were delighted when Pfizer announced April 22 that the companies had received the go-ahead from German regulatory authorities to initiate a phase 1/2 clinical trial of four vaccine candidates from BioNTech's mRNA stable. The dosing stage would include 200 participants between ages 18 and 55 to receive between 1 and 100 micrograms of the vaccine candidates.

The company outlined a few key objectives for the phase 1/2 trial. One was to monitor the immune responses that the four potential vaccines elicited in participants. Another was to evaluate how participants responded to different doses of the three vaccine candidates. Just one week later, on April 29, Pfizer and BioNTech announced the dosing of their initial cohort of participants in the phase 1/2 study in Germany.

The first participants in Pfizer and BioNTech's phase 1/2 clinical trial in the U.S. were dosed on May 5. The U.S. study of the four vaccine candidates includes 360 participants, with one group of subjects between ages 18 and 55 and a second group of subjects between ages 65 and 85. Just a few weeks ago, on July 1, Pfizer released positive preliminary data from the U.S. phase 1/2 study, which is still in progress. The study found that subjects generated coronavirus antibodies after receiving just two doses of BNT162b1.

The potential efficacy of BNT162b1 was further illustrated in the early data from the German phase 1/2 study Pfizer released July 20. Pfizer and BioNTech intend to use the initial findings from both phase 1/2 clinical trials, along with other data, to identify the correct dosage amounts for an upcoming phase 2b/3 trial. The companies will also use the information to determine which of the four vaccine candidates should proceed to the late-stage clinical study.

So far, the two lead candidates from the collaboration are BNT162b1 and another investigational mRNA vaccine, BNT162b2, both of which were were granted fast track designation from the U.S. Food and Drug Administration (FDA) on July 13. The anticipated phase 2b/3 clinical study, which could commence before the month is out, will be substantially larger than either of the phase 1/2 trials and include up to 30,000 subjects around the world. Assuming all goes well, Pfizer and BioNTech hope to have as many as 100 million vaccine doses on the market before the New Year, and possibly over 1.3 billion doses before the end of next year. On July 20, the companies also announced an agreement with the U.K. to provide up to 30 million doses of a coronavirus vaccine between 2020 and 2021, if a vaccine is approved.

In a July 8 interview with TIME, Pfizer CEO Albert Bourla expressed his confidence that vaccine approval from the FDA could be won as early as this autumn. According to Bourla, Pfizer plans to begin manufacturing a vaccine prior to getting the FDA's green light, an unusual and potentially risky move.

The pandemic and Pfizer's balance sheet

Pfizer's yield of about 4% and consistent history of raising its dividend on an annual basis has made it popular with some growth investors. In 2019, Pfizer's revenue hit $51.8 billion, and the company merged its consumer healthcare division with GlaxoSmithKline's (GSK 0.21%) consumer segment last year. If you factor in this amalgamation, full-year revenue was down 1%. Otherwise, Pfizer actually saw 2% revenue growth in 2019. Its biopharma division saw 8% operational growth in 2019, mainly because of drugs like psoriatic arthritis medication Xeljanz and blood thinner Eliquis.

Another notable source of revenue in Q1 were sales of cardiomyopathy drugs Vyndaqel and Vyndamax, whose combined worldwide sales were up 156% in Q1, totaling $231 million. Revenue in the biopharma division also saw a big operational spike of 12% in the first quarter of the year. The company reaffirmed its projected revenue for 2020 to hit somewhere in the ballpark of $48.5 billion to $50.5 billion, which is also good news for investors. The company plans to finish merging its subsidiary Upjohn with Mylan (MYL) later this year, which should be instrumental to Pfizer's growth story.

A successful vaccine would clearly have a tremendous impact on Pfizer’s future growth. As encouraging as positive early data from the company’s ongoing vaccine trials is, investors should refrain from pinning all their hopes on Pfizer’s potential to win the coronavirus vaccine race.

However, investors should get a much better idea of Pfizer's vaccine prospects in the next few months, once results start emerging from the larger phase 2b/3 trial. For now, Pfizer's robust dividend and substantial portfolio are two solid reasons to buy and hold this stock.