Some parents could lose their jobs in the absence of adequate child care.

Millions of workers have lost their jobs since the COVID-19 pandemic took hold, and with the $600 weekly boost to unemployment benefits set to expire at the end of July, many jobless people will no doubt be itching to get back to work as soon as that opportunity presents itself. There's just one problem: A lack of child care might prevent a lot of people from holding down a job.

Numerous businesses have closed their doors in the wake of COVID-19, and child care centers are no exception. It's estimated that 60% of licensed providers have shut down in the course of the pandemic, according to the Bipartisan Policy Center, and among those that have remained open, many have implemented reduced enrollment procedures in an effort to keep everyone safe. But these businesses -- which aren't exactly rolling in dough to begin with -- can only survive at limited capacity for so long, and if additional child care centers close, even more parents will be out of options during the latter part of 2020. 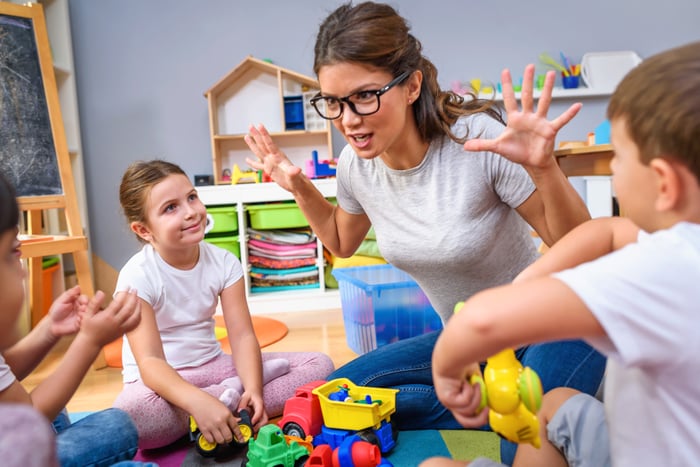 Then there's the matter of school closures. Though President Trump has been pushing schools to open for in-person learning, in areas where COVID-19 is flaring up, administrators are pushing back. California's two largest districts, Los Angeles and San Diego, have already announced that they won't be offering in-person learning to start off the 2020-2021 academic year, and other major cities have followed suit.

Even schools that plan to offer in-person learning may not be doing it on a full-time basis. Some districts plan to use a modified schedule where students learn in a classroom twice a week and complete their schooling from home the rest of the week. Others are limiting in-person instruction to half-days.

All of this boils down to one thing: Many parents are already grappling with a lack of child care, and the problem could very well get worse in the coming months. But as more and more employers reopen offices and insist on in-person work, that could leave parents in an impossible situation -- one that forces them out of a job against their will.

Families need to brace for unemployment

In March, when schools started closing nationwide, many employers supported workers who had to shift to remote work. But their patience may soon start to wear thin.

At this stage of the game, much of the country has reopened and many employers are looking to bring back staff, albeit with precautions. For parents without child care, unemployment seems inevitable, and that's a dangerous thing at a time when the country is grappling with a recession and job prospects may be limited for months after the fact.

So what should parents in this situation do? For those who are still employed, boosting savings is key. That way, if they're forced out of work, they'll have some money on hand to pay the bills in the absence of more robust unemployment benefits. Right now, workers on unemployment get a $600 weekly boost on top of their regular benefits, but that boost is set to expire at the end of July, and lawmakers have by no means promised to extend it. But without that boost, the typical beneficiary is looking at just $380 a week, which is why saving as much as possible is key.

Furthermore, parents who set money aside in a dependent care FSA may want to speak to their employers about pausing contributions if their child care centers are closed or no longer have slots. Dependent care FSAs work on a use-it-or-lose-it basis, so allocating money that can't be used this year is an unwise thing to do.

While some employers may continue to be flexible with parents who lack child care, not everyone will be that fortunate. As lawmakers work on a second COVID-19 relief package, let's hope they introduce some measure to protect parents who have no choice but to stay home for the second part of 2020. Otherwise, a lot of families could be in for a world of financial struggle.