The S&P 500 (SNPINDEX:^GSPC) lost 40.4 points, or 1.2%, on July 23, breaking a streak of positive days in the second half of the month. Today's sell-off came after the Department of Labor reported that 1.42 million people filed for unemployment last week. That's 100,000 higher than the prior week, and 56,000 higher than the four-week average.

Cases of COVID-19 continue to surge higher, a factor that's likely weighing on the jobs market. More than 70,000 new cases were reported yesterday, along with almost 1,100 new deaths. Almost 1.1 million new cases and 12,250 deaths have been reported in July, according to the World Health Organization, and many areas are backing off from prior business reopenings as hospitals face pressure to manage the rapidly growing number of cases that require hospitalization. 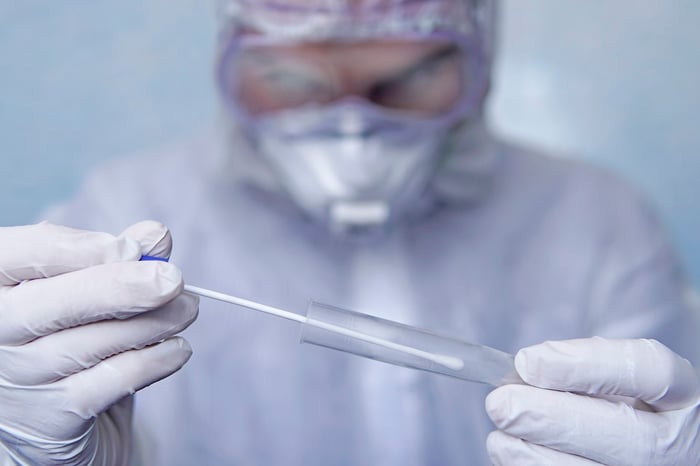 Today's sell-off was driven by a sharp decline from the biggest companies in the index. Apple (NASDAQ:AAPL) and Microsoft (NASDAQ:MSFT) shares both fell more than 4%, while Amazon (NASDAQ:AMZN), Alphabet (NASDAQ:GOOG)(NASDAQ:GOOGL), and Facebook (NASDAQ:FB) shares all lost 3% or more of their value today. Non-index member Tesla (NASDAQ:TSLA) shares also sold off today, following second-quarter earnings yesterday that included a profit for the fourth-straight quarter, but weren't strong enough to help it buck the market's downward trajectory today, even on its prospects of being added to the index.

In other news, stalwarts Becton, Dickinson (NYSE:BDX) and Kimberly Clark (NYSE:KMB) showed off the things that make them appealing stocks to own during recessions.

Unemployment claims back above 1.4 million as economic recovery stalls

2020 has brought unprecedented levels of unemployment. Every single weekly report of initial claims since late March would have smashed the prior record for most-ever weekly initial claims. The trend had been a decline each week, but that trend ended this week when the number of initial claims increased by about 100,000 people from last week.

Against the massive number of people filing each week, an increase in 100,000 may not seem like a large number. Here's some context for what a "normal" weekly unemployment filing week looks like, represented by the initial claims data prior to the coronavirus business closings implemented in late March: 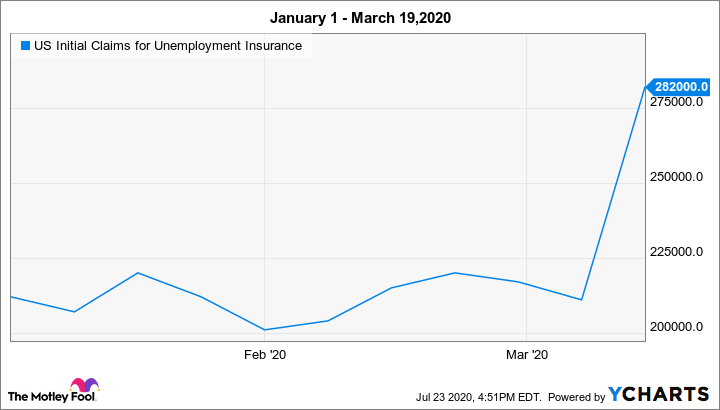 That's right: Total initial unemployment claims were less than 225,000 every week in January and February. A 100,000 increase, against the context of a normal environment, is a big change.

The biggest reason why is the surging number of COVID-19 cases across the country. And while so far we haven't seen deaths in the U.S. rise to the levels we saw early in the outbreak this spring, hospitals are reporting a sharp increase in severe cases requiring hospitalization. Healthcare experts also point out that there is significant evidence that many who recover will suffer permanent injury, including lung and other organ damage.

As a result, investors sent a broad swath of stocks down today in heavy selling. In addition to the tech giants noted above, shares of casino and resort operator Las Vegas Sands (NYSE:LVS) fell 4.2% and Chipotle Mexican Grill (NYSE:CMG) stock was down 5.4%. Sands reported second quarter earnings after market close yesterday, with optimism that more of its properties are opening back up, but not enough to offset today's worries. Chipotle also reported earnings yesterday after trading, but even its blowout results and optimism from management weren't enough to keep some investors from taking profits today.

Healthcare equipment supplier giant and Dividend Aristocrat Becton, Dickinson gave investors another reminder why its business is an excellent recession-resistant investment, and that there are catalysts that have it positioned to deliver strong results in this moment. The company said it has "additional pandemic" orders for 265 million needles and syringes from the U.S. and Canadian governments, and another 40 million from the U.K. The medical device provider is a key supplier to the global healthcare supply chain, and it's looking like investors are starting to see the value. Shares are up 16% over the past month.

Kimberly Clark, the consumer goods giant best-known for its paper towel, toilet paper, and diapers brands, reported second quarter earnings before market open today. Organic revenue was up 4% as people showed their brand loyalty, while its pricing power and strong supply chain helped profits increase 3% and operating cash flow surge to a record $1.6 billion. Its shares bucked the trend today, gaining 2%. Total returns -- including dividends for this Dividend Aristocrat -- are just under 8% so far this year.

After turning in a second quarter profit that many analysts weren't expecting, Tesla shares fell almost 5% today. On the one hand, today's sell-off may have been unexpected. Not only did the company report that surprise profit that sets it up to join the S&P 500 Index, but guidance for the rest of the year was upbeat.

On the other hand, Tesla stock has been on an absolute tear. So far this year it's up more than 260% and has gained almost 500% over the past year. It looks like even the prospects of the world's biggest index funds having to buy shares to add the company to their holdings wasn't enough to keep some investors from taking profits, at least for today.