Wall Street has been steadily gaining ground in recent months, but the moves haven't been straight up. Investors got a chance to see an example of that Thursday morning. Major indexes opened near the unchanged level and saw periods of gains and losses before settling in for minimal declines. Just before 11 a.m. EDT, the Dow Jones Industrial Average (DJINDICES:^DJI) was down 95 points to 26,911. The S&P 500 (SNPINDEX:^GSPC) fell 1 point to 3,275, and the Nasdaq Composite (NASDAQINDEX:^IXIC) lost 11 points to 10,695.

Airlines have been among the industries that have suffered the most during the COVID-19 pandemic. Unfortunately, there's no real end in sight to the pain that airline stocks are seeing, and that showed up in the second-quarter earnings reports that Southwest Airlines (NYSE:LUV) and American Airlines Holdings (NASDAQ:AAL) released Thursday morning.

Southwest tries to rise above the turbulence

Southwest's stock took the bigger hit on Thursday morning, falling 3%. The airline's operational numbers showed the full extent of the challenge from the coronavirus crisis, and although Southwest has the capacity to endure a lot more pain, it nevertheless anticipates needing to do so well into the future. 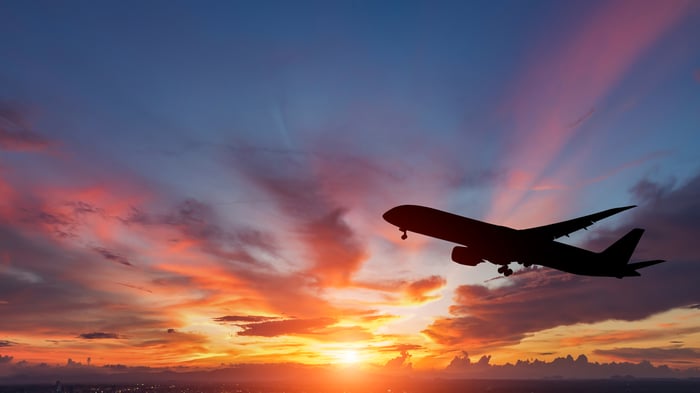 Southwest lost $915 million in the second quarter, and things would've been worse without federal government support and other extraordinary items. Adjusted net losses of $1.5 billion were largely the result of a severe 83% decline in operating revenue, which reflected the huge drop in demand among travelers as the COVID-19 pandemic worsened.

Even worse, Southwest isn't confident about the future. Trends improved in May and June, but July has started out weak as a new wave of cases has hit several key travel states. CEO Gary Kelly said that he expects travel demand won't recover until a vaccine or other treatment is available.

With $14.5 billion in cash and short-term investments as of June 30, Southwest has the liquidity to endure a protracted drop in flying activity. Yet the company is burning cash at a rapid rate, and if a second wave of COVID-19 in the U.S. worsens, Southwest could have to take more steps to cut costs and manage its finances effectively.

A bumpy road for American

American Airlines stock was down just 1% after its report. Investors shouldn't assume, though, that American's prospects were any rosier than Southwest's.

American lost $2.1 billion in the second quarter, and without special items, the losses would've been $3.4 billion. Operating revenue plunged 86% on a 90% drop in passenger revenue, as cargo and other operations failed to take up much of the slack in capacity. Load factor for the airline came in at 42.3%, down by more than half from year-ago levels. In particular, American's international segments saw demand drop the most, with Pacific revenue passenger miles falling almost 99% year over year.

Like Southwest, American has taken steps to boost its liquidity. But to do so, American has had to offer considerable amounts of stock and bonds and also take federal assistance from the Treasury Department. In addition, dramatic cost-cutting measures include the retirement of four different types of aircraft, slashing its schedules, and introducing voluntary leave and retirement packages.

Airline stocks still face a lot of uncertainty, and neither American nor Southwest can predict how long things will remain bad for the industry. For now, investors simply hope that major carriers will be able to keep operating and that a solution to the coronavirus crisis will come soon.