It's been a highly unusual year for the railroads. On the one hand, the COVID-19 pandemic has obviously hit their end markets very hard. On the other hand, there's evidence that the long-term earnings outlook is actually improving, especially for Kansas City Southern (NYSE:KSU). The company's recent second-quarter earnings helped to highlight these factors. Let's take a closer look at what investors need to know before buying the stock.

The second quarter was always going to be a horrible one for Kansas City Southern. The COVID-19 pandemic hit the industrial economy hard, and the company's revenue declined 23% on a year-over-year basis to $548 million. The revenue decline led to a drop in adjusted operating profit from $259 million to $191 million. 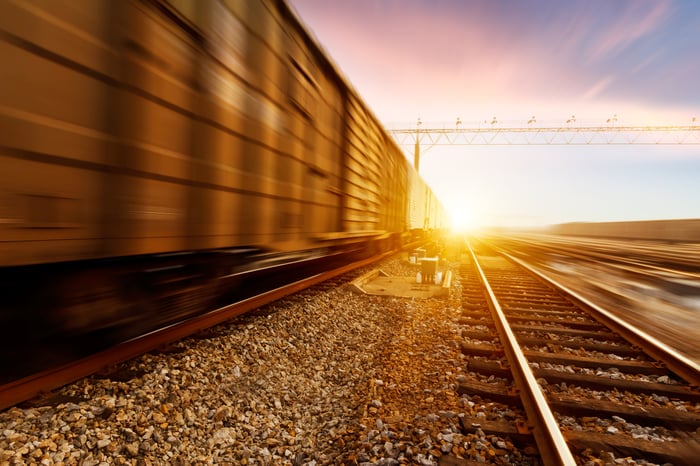 Looking ahead, it's hard to know exactly what kind of end market conditions will prevail in the second half, and management refrained from giving guidance other than confirming its target for free cash flow of $500 million in 2020 -- a figure equivalent to 3.4% of its market cap.

Of course, if there's a high level of uncertainty around revenue, there's also likely to be uncertainty around profit margin too. Indeed, CEO Patrick Ottensmeyer didn't give guidance for the company's operating ratio (OR), either. The OR is a key measure in the industry and is simply operating expenses divided by revenue, so a lower number is better.

The near-term outlook is unclear, but there are three reasons to believe that the railroad's long-term prospects are improving.

Railroad investors will be familiar with the idea that precision scheduled railroading (PSR) initiatives are seen as significantly reducing railroad OR over time. Simply put, they are management principles designed to run the same amount of volume using fewer assets.

The good news from the earnings presentation is that management thinks the cost savings and operational improvements being generated now are going to stick in the future. In fact, management now expects $150 million in annualized operating expenses by 2021 compared to the previous estimate for $125 million.

During the earnings call, the railroad's executive vice president of PSR, Sameh Fahmy, outlined, "[W]e know that when we get to the full volumes, we'll be able to do it with 20% less train starts, 20% less crew starts, 20% less locomotives, 20% higher train lengths and 9% better fuel efficiency than we did in February."

These stats are borne out in the quarterly and current data on the key PSR metrics shown below.

If Fahmy is right about the operational improvements sticking, analysts should be lowering their assumptions for OR over the long term, and that means higher earnings expectations.

While the growth outlook is uncertain due to the lingering impact of the pandemic and the possibility of a second wave, it's highly likely that the second quarter will mark a trough for transportation stocks.

Chief Marketing Officer Mike Naatz disclosed that carload volumes had improved 39% since bottoming in May, and the last two weeks' carloads of 5,900 carloads per day are only 5% off the pre-COVID trend of 6,200 carloads per day.

As such, the underlying trend is positive. In the absence of deterioration in the industrial economy caused by a second wave of COVID-19, it's reasonable to expect sequential improvement in growth.

The trade conflict and the imposition of tariffs on products made in China have increased the willingness of U.S. companies to shift production out of the country and back toward the U.S. The supply chain difficulties experienced during the COVID-19 pandemic have also highlighted the risks inherent in the global supply chain.

Consequently, many manufacturers are looking at reshoring (transferring operations that had been moved overseas back to the country of origin) as a solution, and that's probably going to be good news for Kansas City Southern. A pickup in industrial activity in the U.S. is obviously good news for the railroads. In addition, the United States-Mexico-Canada Agreement (USMCA) means that Mexico is likely to be a beneficiary of a shift in low-cost production away from the Far East. Given the railroad company's role in linking the industrial cities of Mexico to the commercial and industrial markets in the U.S., it's well placed to benefit.

The question of reshoring came up on the earnings call, and while Ottensmeyer noted that the COVID-19 pandemic had "slowed things down," it's still a "very positive profile" in the long term for Mexico.

Is Kansas City Southern a buy?

While the near-term outlook remains uncertain, the long-term outlook is positive. A combination of operational improvements, cost savings, and a growth kicker from reshoring suggests that Kansas City Southern has a long runway of profit improvement ahead.

All told, the stock remains attractive for investors who are willing to ignore the possibility of some near-term disappointment if a second wave of the pandemic slows the recovery.