Major market benchmarks were lower Friday morning, but they cut their losses from early in the session.

Amid the COVID-19 pandemic, relations between the U.S. and China largely faded into the background. However, new tensions have brought disputes back into the spotlight, and that's been a source of concern for professional investors on Wall Street. Just after 11 a.m. EDT, the Dow Jones Industrial Average (^DJI) was down 69 points to 26,584, after having been down almost 200 points earlier in the session. The S&P 500 (^GSPC 1.46%) fell 12 points to 3,223, and the Nasdaq Composite (^IXIC) lost 79 points to 10,383.

Disappointing earnings from some of the biggest companies in the stock market contributed to the downbeat mood among market participants Friday morning. Yet that also weighed on some of the high-flying sectors of the market. In the red-hot electric-vehicle industry, Nikola (NKLA 7.97%) and Tesla (TSLA 3.94%) posted notable declines that pulled down peers like NIO (NIO 0.42%), Workhorse Group (WKHS 6.76%), and Tortoise Acquisition (SHLL) along with them.

Shares of Nikola dropped 9% Friday morning, continuing its steep decline recently. The electric-truck manufacturer's stock has lost half its value just since the beginning of July. Investors aren't certain whether the future will be brighter for the company, either. 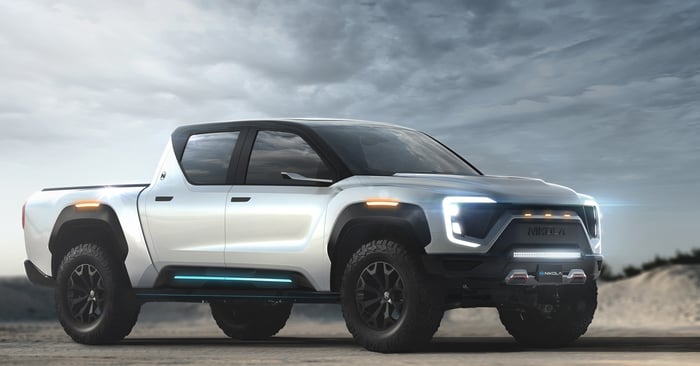 Nikola has had a lot of important news come out in the past few weeks. The company finally got around to making its warrants exercisable for shares, which had been a key sticking point among many Nikola investors. A massive price imbalance between the stock and the warrants had suggested that a decline in the stock price was possible, and in the end, the impact was negative for investors in both securities.

Nevertheless, Nikola is moving forward with its long-term plans. The electric-truck maker broke ground on a manufacturing facility in Arizona. Phase 1 of construction should finish up late next year, with phase 2 likely to be complete in late 2022 or early 2023. Once it's ready to go, the plant should produce 35,000 vehicles per year.

Investors seem to be realizing, though, that it'll be a while before Nikola is ready to join the EV fray. That'll give established companies like Tesla a bigger head start while letting rivals like Workhorse Group, NIO, and Tortoise acquisition candidate Hyliion a chance to ramp up their own operations.

As for Tesla, its stock gave up another 4% Friday morning. Yet it too had been down much more steeply early in the session, briefly falling below the $1,400-per-share mark. Given the stock's big run in recent weeks, it's not surprising to see investors in Tesla take a break from the hype surrounding the electric vehicle pioneer.

Tesla's second-quarter financial report had a lot of good news in it, even if the resulting bump in the stock price was extremely short-lived. A fourth-straight quarterly profit made the company S&P 500-eligible, and even with the COVID-19 pandemic weighing on business activity and forcing Tesla to keep its primary manufacturing facility shut for roughly half of the period, revenue was down just 5% compared to the year-earlier quarter.

What some shareholders are quick to forget, though, is that Tesla stock soared in anticipation of exactly this kind of performance. As recently as June 29, you could buy shares of the EV maker for less than $1,000 each. Even with this morning's drop, the stock is up more than 40% in less than a month.

Declines elsewhere in the EV industry were generally consistent with how Nikola and Tesla did. Workhorse Group was down 3%, while NIO suffered a 4% decline and Tortoise gave up 6%.

The stock market has moved aggressively higher, lifting electric-vehicle stocks in particular. Investors shouldn't draw any key conclusions from a correction in these stocks. Instead, it's important to wait for more news about how these companies are actually performing before deciding how to respond.

Tesla Falls Again, but This Nasdaq Stock Is Truly Plunging
395%