Electric-vehicle stocks were selling off, but there was more to the story.

Shares of electric-semi start-up Nikola (NKLA -4.27%) were trading lower on Friday as sectorwide pressure on electric-vehicle stocks exacerbated what has been a rough week for the company's shares.

Nikola was one of several electric-vehicle stocks that was hit by a wave of selling on Friday after a Wall Street analyst issued a post-earnings downgrade on Tesla (TSLA -2.03%). Shares of Tesla, NIO (NIO 2.44%), Workhorse Group (WKHS -5.38%), and other electric-vehicle companies all fell, but as of 1:30 p.m. EDT, none was down as far as Nikola's on a percentage basis.

As I mentioned, Nikola's shares have had a rough week, giving up almost 40% after the company said that it will begin redeeming 23 million warrants. The warrants in question were issued in 2018 by VectoIQ Acquisition, the special-purpose acquisition company that took Nikola public via a so-called reverse merger in early June. 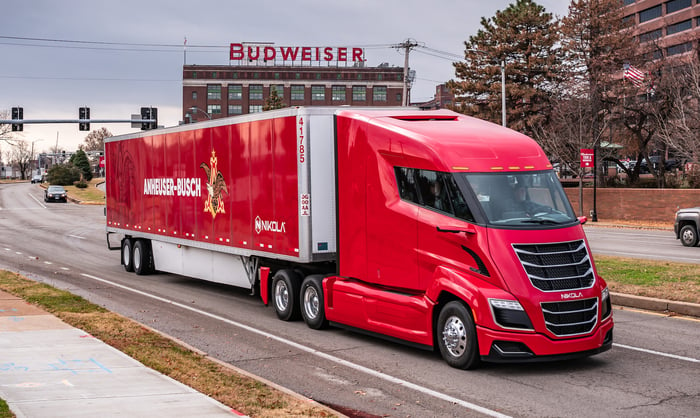 Those warrants, which trade under the ticker "NKLAW," each give the owner the right to buy one share of Nikola from the company at $11.50, well below recent price levels. After the market closed last Friday, Nikola said in a regulatory filing that the warrants could now be redeemed; it said on Wednesday that holders of the publicly traded warrants must redeem them by Aug. 21. After that date, the warrants will be worth just $0.01 each.

On the one hand, that decision will put $264 million into Nikola's coffers by Aug. 21, assuming that all of the warrants are exercised. On the other hand, it will put 23 million new shares of Nikola into circulation, diluting existing shareholders.

Concerns about that dilution were likely adding to the selling pressure on Nikola's stock on Friday.

Given that Nikola has about 1.18 billion shares outstanding, with nearly 800 million circulating, the dilution won't be drastic. But the announcement was the catalyst for this week's sell-off -- which, to be fair, wasn't all that surprising for a newly public company that doesn't expect to have any revenue until the second half of 2021 at the earliest.

Auto investors will learn more about Nikola's finances and its plans to get its trucks into production when it reports its second-quarter results after the market closes on Aug. 4.

Why Nikola, Fisker, and Hyzon Motors Stocks Jumped This Week
366%