Please ensure Javascript is enabled for purposes of website accessibility
Log In Help Join The Motley Fool
Free Article Join Over 1 Million Premium Members And Get More In-Depth Stock Guidance and Research
By Adria Cimino – Jul 25, 2020 at 6:30AM

The healthcare industry is a good place to shop for stocks to keep your portfolio healthy during the next market crash.

Which stocks are best to own during a market crash? To find out, we can look to ones that demonstrated strength in the most recent crash. Often, the winners are those with market leadership. If demand for their products or services remains strong in spite of economic upset, that makes for an even better case.

The healthcare sector is a good place to look for these sorts of shares due to the need associated with their therapies or technologies. Here, I've zeroed in on two biotech companies and a medical device player whose shares quickly recovered after March's market crash. Vertex Pharmaceuticals (VRTX -1.11%) has climbed 28% so far this year, Illumina (ILMN -1.56%) has advanced 15%, and BioMarin Pharmaceutical (BMRN -0.34%) has gained 45%. 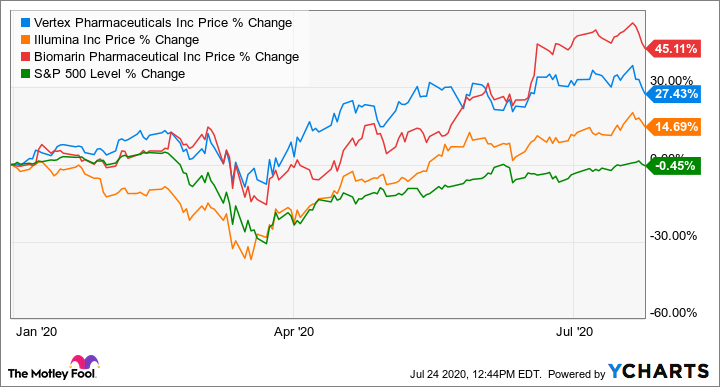 Vertex dominates the cystic fibrosis market. The company has four commercialized treatments for the disease, including one that's relatively new. The U.S. Food and Drug Administration (FDA) approved Trikafta in October, and the drug generated $895 million in sales in its first full quarter on the market. It's clearly on the road to becoming a blockbuster for Vertex. Why is Trikafta such an immediate hit? Vertex calls the drug a "breakthrough," with the potential to treat about 90% of cystic fibrosis patients in the future.

Vertex's annual revenue has been climbing since 2015. Last year, Vertex reported $4.2 billion in total revenue, up from $1 billion in 2015. Its cystic fibrosis drugs ensure consistent revenue growth for the next several years. Morningstar expects the portfolio to generate $10 billion in sales for the company by 2028. And while that's happening, Vertex is working on programs that will expand its business in the longer term. Vertex has taken a leap into the area of gene therapy. Vertex, in a partnership with CRISPR Therapeutics (CRSP 1.33%), recently announced encouraging phase 1/2 trial results from a gene-editing therapy in two genetic blood disorders.

While other companies lowered annual guidance due to the coronavirus crisis, Vertex increased its outlook for product sales. As long as Vertex is able to manage its supply chain, the need for Vertex's products means that a market crash isn't likely to disturb demand. 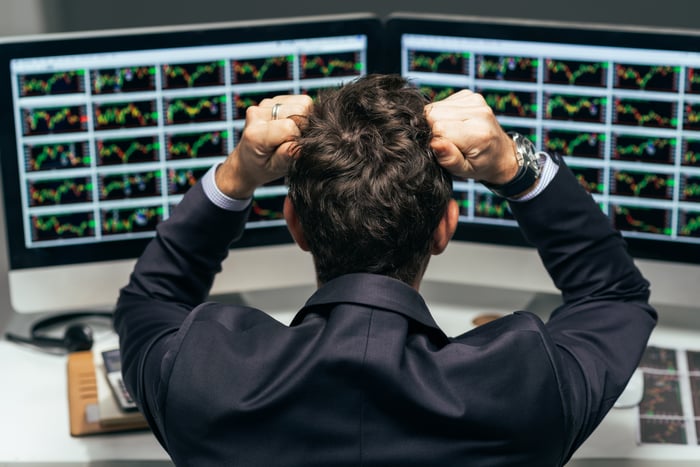 The path for genetic-sequencing giant Illumina has been a bit rocky during the coronavirus outbreak. Revenue for the first quarter came in at $859 million, higher than guidance of at most $855 million. But revenue in certain segments disappointed. Due to the coronavirus outbreak, patients in China couldn't make it to oncology testing appointments, for example. That weighed on business there.

Like many other companies, Illumina withdrew annual guidance. And when the company reports second-quarter earnings on Aug. 6, investors may see further impact from the crisis. So why am I optimistic about Illumina in a market crash? Illumina is a market leader. The company holds 70% of the sequencing market, according to Morningstar. So even if business suffers in the short term, once the crisis is over, revenue is likely to return to pre-crisis levels.

Illumina shares are trading at an all-time high. But there is plenty of potential ahead. Especially when considering the company's market share and track record: Annual revenue has been climbing for more than a decade, and annual net income grew to more than $1 billion last year from $500 million just two years earlier.

Annual revenue at BioMarin has been rising since 2014. And over the past three years, the annual net loss has been narrowing. In fact, BioMarin expects to post an annual profit for the first time this year. The company has seven products on the market for the treatment of rare genetic diseases such as phenylketonuria (PKU), a disease affecting the brain. BioMarin's PKU treatment Palynziq posted a 181% jump in revenue in the first quarter as new patients started treatment and others reached maintenance dosing.

A near-term catalyst for BioMarin shares likely will be the FDA's decision on valoctocogene roxaparvovec gene therapy for severe hemophilia A. The action date is set for Aug. 21. If approved, it would be the first gene therapy approved for any type of hemophilia. The company also plans on submitting vosoritide for children with achondroplasia to the FDA and the European Medicines Agency in the third quarter of this year.

The coronavirus pandemic's impact on BioMarin was limited in the first quarter. But the company warned the impact may deepen as the health crisis persists. Infusions for some patients may be postponed as hospitals and clinics prioritize coronavirus treatment. The fact that BioMarin's patients must be treated in a hospital setting makes the company vulnerable. But if future market crashes aren't linked to a health crisis, this vulnerability likely won't be back. As for right now, the vulnerability is temporary. BioMarin's drugs are essential for patients, meaning if there is a slowdown, this biotech company's revenue should be quick to recover.