The Air Force needs new airplanes -- and not necessarily F-35s.

Fifth-generation "stealthy" fighter jets, invisible to radar, capable of flying unimpeded into hostile territory to hit their targets and come home safe -- how great is that? Who wouldn't want to own a whole flock of them? There's just one little problem: the price tag.

At last report, determined efforts to cut costs had driven the price of a Lockheed Martin (LMT 0.58%) F-35A stealth fighter down to about $100 million per unit (including the cost of the engines). That's only about $10 million more than the cost of Boeing's (BA 1.59%) latest iteration of its venerable F-15 Strike Eagle, the F-15EX.

But it gets worse.

As my fellow Fool Lou Whiteman pointed out last year, sticker price is only one component of an aircraft's total "ownership cost." Once you factor in the cost to fuel, maintain, and operate the aircraft (about $30,000 for every hour an F-15 is airborne -- and 150% times that for the F-35!), it turns out that the F-35 is actually much more expensive to buy, and fly, than Boeing's cheaper alternative -- roughly 29% more expensive over 10 years of use. 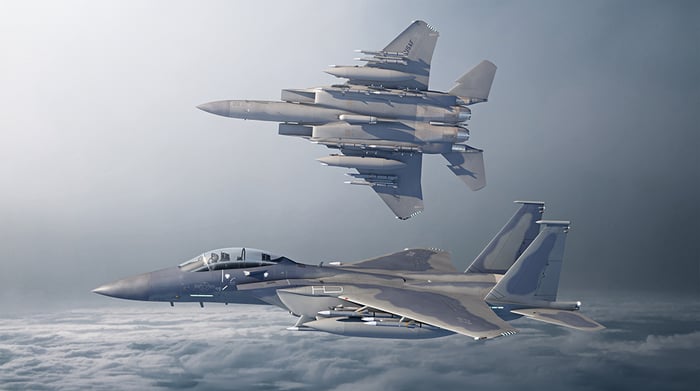 How to build an air force on a budget

Recognizing this, and recognizing, too, that not all theaters of conflict require ultra-high-end, fifth-generation fighter jets to ensure air superiority, a few years ago the Air Force floated the idea of ratcheting back F-35 purchases a bit, and instead buying a few more cheaper fourth-generation aircraft -- planes like Boeing's F-15EX. By doing so, the thinking went, USAF could still deploy F-35s where stealth is needed, but use F-15s where it isn't -- thus stretching its defense dollars a bit further.

And now the Air Force is doing just that. Last week, the Defense Department announced in its daily digest of defense contracts awarded that Boeing will produce an unspecified number of F-15EX aircraft over the next three years, at a total cost of $22.89 billion.

The exact number of F-15EXes the Air Force will be getting was not stated, but media reports suggest the number could range from as few as 144 jets to as many as 200 -- nearly enough to replace all of the 235 older F-15C and -D fighters that the Air Force currently flies as they age out of the fleet. Per-plane costs are estimated at $87.7 million, with the difference (200 planes times $87.7 million each does not equal $22.89 billion) presumably accounted for by the cost of maintaining the planes and providing various ancillary parts and services.

Once built, these F-15EXes can be used in places where stealthier, pricier F-35s aren't necessary -- and also where they are. Incapable of "stealth," the F-15EX won't even try to minimize its radar profile by keeping weapons stored internally. By cluttering up its wings with bombs and missiles, it can carry as much as six times more ordnance than a stealthy F-35. In this scenario, the F-15EX will act as a "bomb truck," trailing behind stealthy F-35s, out of radar range of the enemy and launching its missiles from a safe distance at targets the F-35s designate.

Thus, Boeing's F-15EX won't so much be displacing Lockheed's F-35, but supplementing it.

That's good news for Lockheed Martin, which got quite a shock when the Air Force began talking about buying more F-15s a few years ago -- but can now rest easy in the knowledge its planes won't be replaced. Of course, the arrival of a $22.89 billion bonanza is even better news for Boeing.

Just five years ago, if you recall, Boeing was racking up record revenue in its commercial airplanes business -- nearly $60 billion a year, according to data from S&P Global Market Intelligence -- while its defense business had been given up for dead. Boeing defense head Leanne Caret was musing publicly about how Boeing needed to "evolve" into something other than a fighter jet manufacturer, because it just couldn't win a contract when competing against Lockheed.

Boeing's marquee 737 MAX commercial airliner program has been sidelined. Its entire commercial airplane business is being throttled by the coronavirus, which has crushed demand for air travel. And Boeing's space program, an industry leader since the Apollo era, has endured the crushing failure of a test flight, and been ordered to try again.

In the face of all these headwinds, Boeing's F-15EX windfall couldn't have come at a better time. As its commercial aerospace business falters, the defense business picks up the slack. It's hard to imagine a clearer example of the advantages of the conglomerate business model, where Boeing can juggle alternately weak and strong businesses to ensure the continued health of the whole enterprise.

Thanks in large part to winning the F-15EX contract, Boeing will survive its present crisis, and keep on flying for many a year to come.