While most retailers outside of those selling essentials have seen moderate to large declines during the pandemic, Williams-Sonoma (NYSE:WSM) scored a comparable-sales increase. That's a pretty impressive feat for a retail chain that sells mostly unessential products with stores closed for several weeks during the fiscal first quarter (ended May 3).

What is Williams-Sonoma doing right, and can we expect it to keep growing? Here are three reasons you should be following the upscale housewares company.

Customers love it, especially when they're at home all day

Wlliams-Sonoma bills itself as "The world's largest digital-first, design-led, sustainable home retailer." That's a lot of adjectives, but within that slogan are the core elements that make Williams-Sonoma a leader in housewares and retailing. 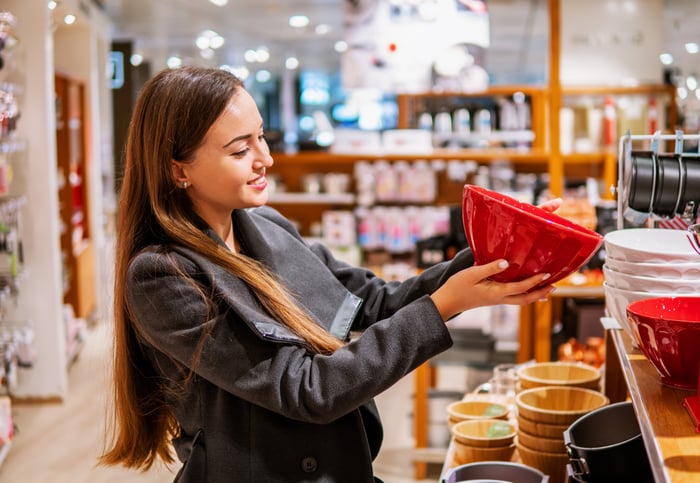 The company operates under six different brand names that each sell different but complementary merchandise to upscale clientele. With that strategy, Williams-Sonoma reaches its customers through multiple storefronts that each offer their own niche of products. Retail has been moving toward small, experiential stores backed up by a capable digital program, and the company has been aggressively pursuing this strategy for years.

Through this model, the company has been able to achieve a 6% compound annual growth rate (CAGR) on its top line and increased earnings per share every year over the past decade. It also reported 2.6% comps growth during the last quarter when other retailers saw losses, many quite significant.

There were several contributing factors to this outperformance. First, Williams-Sonoma customers tend to have more disposable income. While that target market becomes particularly notable during challenging periods like the present, it's an advantage in any market.

Next, while people stayed home, they were more likely to spend money on home furnishings. Comscore reported that visits to home furnishings websites increased 90% in the week of April 27 compared to the week of Feb. 3. But while this increased demand worked in the company's favor, it was Williams-Sonoma's omni-channel backbone that allowed it to leverage that demand toward a 31% increase in e-commerce comps in the first quarter. E-commerce made up 54% of the top line in the prior-year quarter, but that figure surged to over 70% in the latest period.

Despite the company's rising share price, which is up 16% year to date, the stock still sports a trailing price-to-earnings ratio of 20. And although it may not be the hottest growth stock, shares have delivered gains of more than 80% over the last three years. That's not including its dividend, which yields 2.3% as of this writing when many other companies have suspended their payouts for the foreseeable future.

Williams-Sonoma is effectively executing on the strategy that fellow housewares retailer Bed, Bath and Beyond (NASDAQ:BBBY) has long hoped to achieve. The former has specialty stores with a strong emphasis on the customer experience with special workshops and store cookbooks. It also sells its own in-house brands.

There's plenty of room to grow

Williams-Sonoma had fiscal 2019 annual sales of $5.9 billion out of a total $330 billion global market with ample growth opportunities abroad. The company is still focused on digital penetration and its private-label business. Eighty-percent of industry sales still happen in store, which means digital remains an open playing field.

Although the company declined to provide a second-quarter outlook, management did point to a long-term revenue growth target in the mid-to-high single digits.

With solid comps, an attractive valuation, and tremendous room for expansion, investors should consider adding this leading retailer to their portfolio.