Late last year, before the coronavirus contagion became the one thing that mattered the most, struggling retailer Bed Bath & Beyond (NASDAQ:BBBY) began putting some much-needed change in place. Namely, it hired former Target (NYSE:TGT) merchandising executive Mark Tritton as its new CEO in October, who in December sent the vast majority of his executive management team packing.

The sweeping move solidified the idea that he was going to try and recreate his success at Target, which was largely rooted in private label goods. Any executive not completely on board with (or up to fulfilling) his vision for the retailer's overhaul is no longer around.

However, the company's been strangely slow to replace those former members of Tritton's management team. Joe Hartsig wasn't named chief merchandising officer until March of this year. New Chief Operating Officer John Hartmann wasn't brought on board until April, and Gustavo Arnal was only named CFO in late April. Chief Brand Officer Cindy Davis wasn't put in place until May.

Moreover, conspicuously missing from the job descriptions of these new executives -- and any other recent public discussions of corporate strategy -- was word on its private label initiative. Perhaps it wasn't a key part of Tritton's plan after all. 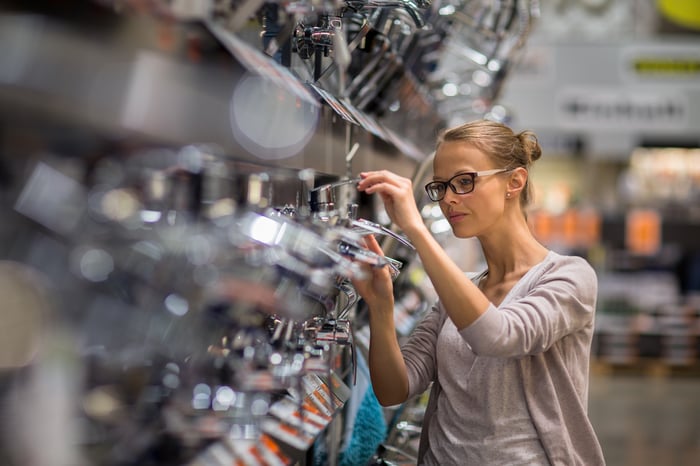 It couldn't have been a better choice, as he held essentially the same job at Williams Sonoma for years.

An evolution, from just-generic to premium private label

Product lines that used to be referred to as "generic" and begrudgingly carried by retailers (just to be able to offer something off-price) have evolved tremendously over the years. Now many of these so-called store brands are the premium products in a retailer's aisles. The Our Brands category of goods Kroger sells, for instance, often rate higher than competing national brands in terms of quality. This group includes Kroger's own organic brand called Simple Truth, which often costs more than similar goods from competing national brands. Consumers don't mind paying up for this quality, and they don't care who made it, leading Kroger's house brands revenue to a record-breaking $23.1 billion in sales in 2019.

Private label isn't just a grocery phenomenon. E-commerce giant Amazon is in the business too, along with many other retailers. Target is waist-deep in it, largely thanks to Tritton. It now operates dozens of house brands, which, according to an estimate from e-commerce news site The Drum, now drives more than $70 billion worth of sales per year for the discount chain.

The interest in offering more house brands isn't tough to figure out -- there's good money to be made in offering goods procured and packaged by a retailer compared to strictly carrying another manufacturer's goods.

That wasn't always the case. For years retailers were content to let national brands do the heavy lifting in terms of advertising and product creation. As time has marched on, though, retailers have learned a trick or two. It's now difficult to distinguish between third-party bands and a store's owned brands. For instance, many consumers may not realize Target's popular Cat & Jack line of clothes for kids is entirely Target's invention.

Cat & Jack was only launched in 2016, by the way, just a couple of months after Mark Tritton was named the company's chief merchandising officer. It's since become a $2 billion brand for the company.

See, Williams Sonoma isn't just a retailer selling inventory from other suppliers. Thanks to Lick, it's got a deep bench of its own premium home-goods products with a Williams Sonoma label as well, like cookware, kitchen appliances, and bed linens, just to name a few. The retailer also owns the furniture brand West Elm, sold in West Elm stores. In short, as the senior vice president of merchandising for Williams Sonoma -- which included duties like product innovation -- Neil Lick has already been where Mark Tritton was with Target, and where Tritton now seems to want to go with Bed Bath & Beyond. There may be no one in the country better suited for this particular job, particularly given Tritton's affinity and support for home-grown brands.

Bottom line? It's increasingly clear private label is going to be a key part of Bed Bath & Beyond's turnaround.