The private-label movement took another leap forward last week, with grocery store chain Kroger (NYSE:KR) unveiling a house-brand vegan meat alternative and Target (NYSE:TGT) introducing its own new line of athletic apparel. In addition, although no new products were announced, some of the wine industry's notable vintners reiterated at last week's Private Label Trade Show that retailers' wine brands themselves have never been better positioned for growth.

The news is only a reflection of how consumer demand has shifted ... and continues to shift. Gone are the days when "store brands" and "generic" were largely interchangeable terms, with both mostly unloved. Private-label brands are increasingly competitive with national, third-party brands of consumer goods. Stores that are piecing together a smart private-label strategy and product portfolio now are positioning themselves to dominate the increasingly competitive retail landscape later, and the two aforementioned companies are at the top of their game on this front. 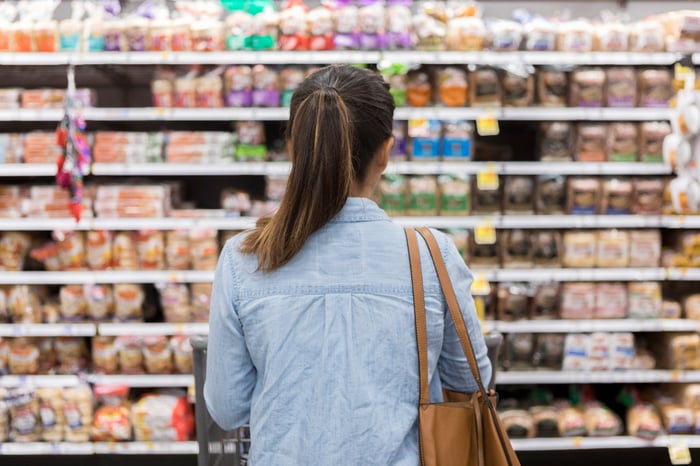 Kroger's new Simple Truth Emerge plant-based (peas, to be specific) beef alternative is, even if unintentionally, a shot at Beyond Meat. The alternative meat maker has managed to turn more than a few consumers' heads with a splashy launch last year, but with a huge distribution network and access to suppliers, Kroger can easily slide into the business by utilizing an existing brand name.

Target is taking a different approach, creating a new activewear label called All in Motion that should at least annoy the likes of Nike and Under Armour.

It's not difficult to understand their interest. A store's in-house brands are generally more profitable -- by a lot. Grocers' margins on outside brands' packaged foods, for instance, are on the order of 1% of its sales price after all related expenses are paid. Margins on private-label packaged foods, though, are between 25% to 30%, according to data from CB Insights.

It's not just lower costs and wider margins that are fueling the private-label movement. Retailers are also able to leverage private-label brands to fill voids left behind by third-party suppliers.

Perhaps no player does this quite as well as Target. Although the company lost some of its allure with shoppers several years ago, CEO Brian Cornell unveiled a bold plan in 2017 to bring the company back to its "cheap chic" roots. That plan largely involved the launch of new, in-store clothing labels like Cat & Jack, A New Day, Goodfellow, and a couple dozen others that addressed a low-cost fashion market that still existed, but was underdressed by a department store industry on the defensive.Several of its house-brand clothing lines now drive more than $1 billion in annual sales, and its store brands, in total, are now estimated to account for about one-third of Target's total business.

The store brand initiative is largely credited with Target's sales growth of 4.4% through the first three fiscal quarters of 2019, in an environment where too many other apparel-focused department stores are struggling.

In simplest terms, retailers are getting very good at making their own brands look and sell like established national brands of goods. Target and Kroger do it exceedingly well, but competitors are quickly learning that selling store brands is more than just a price/value trade-off. Shoppers will pay up for the right product, and retailers -- as it turns out -- are well equipped to figure out exactly what shoppers want.

The data at least partially points to changes related to the age of consumers. Whereas 25% of the average shopping cart of U.S. consumers regardless of their age consists of private-label goods, 32% of purchases made by convenience and value-minded (though not necessarily cost-minded) millennials are private-label products. These younger consumers are quickly entering their high-earning years, too, making them prime targets for store brands that span the price spectrum.

The tipping point is in sight

It's still not the new norm. Despite the noteworthy success stories, it's difficult to look past the fact that national, retailer-agnostic brands such as the aforementioned Nike or Procter & Gamble are still driving the majority of revenue for stores like Target and Kroger.

However, the current trajectory of the movement is the key. As more and more store chains gain experience with home-grown products, they're emboldened to add them to their product mix. This isn't a paradigm shift that's apt to reverse course anytime soon, either -- if ever. As such, investors would be wise to view pacesetters such as Costco, Kroger, and Target as the model for what others should do, with the latter of those two extending their lead on rivals a little bit more last week.