Please ensure Javascript is enabled for purposes of website accessibility
Log In Help Join The Motley Fool
Free Article Join Over 1 Million Premium Members And Get More In-Depth Stock Guidance and Research
By Sushree Mohanty – Jul 26, 2020 at 7:36AM

The U.S. marijuana industry looks promising, but which of these two pot stocks should you choose?

Marijuana sales are reaching new highs despite the ongoing coronavirus crisis. The Canadian pot industry saw rising sales after declaring cannabis an "essential item," although legal weed still faces hurdles from cheaper black-market sales and fewer-than-expected legal stores. Meanwhile, the U.S. cannabis industry is booming, with 33 states and the District of Columbia allowing medical cannabis, and 11 states and D.C. allowing recreational use. Even without federal legalization of marijuana, U.S. cannabis companies have seen impressive revenue growth in the first quarter. 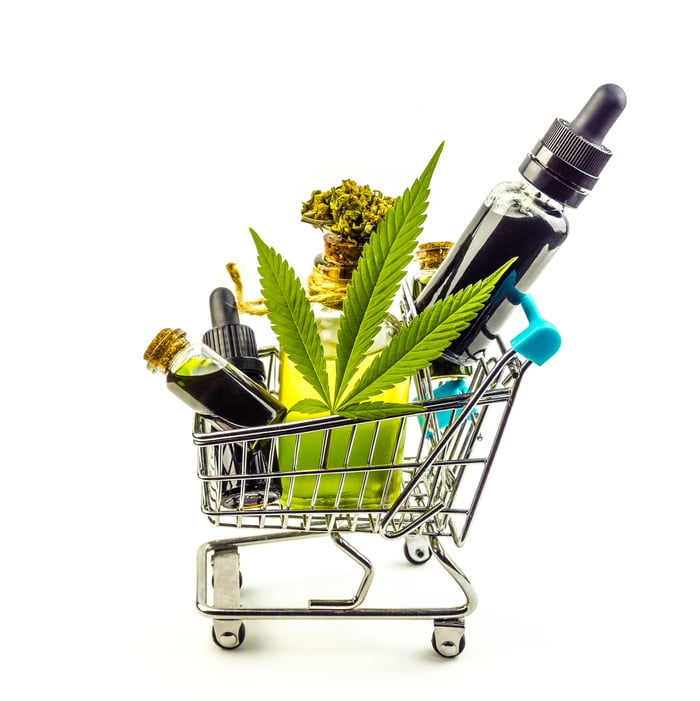 Green Thumb's plus point is its strong presence in its home state of Illinois, which is emerging as a new cannabis market. After Illinois legalized recreational cannabis on Jan. 1, there seems to be no stopping sales growth in the state. Green Thumb showed tremendous growth in almost every month of 2020, with a record-breaking June that included $47.6 million in legal cannabis sales.

Green Thumb currently has 48 stores in 12 U.S. states, and it holds licenses to open 96 more retail locations. This gives the company, with a strong balance sheet and rising revenue and profitability, a chance to expand in even more states that allow legal cannabis. Furthermore, the upcoming November elections could see more states legalizing marijuana.

Green Thumb ended its first quarter with $71.5 million in cash and cash equivalents. It expanded revenue by 268% year over year, to $102.6 million, and it posted positive earnings before interest, tax, depreciation, and amortization (EBITDA) of $25.5 million. Imagine the revenue growth when Green Thumb spreads its roots in more states with new "cannabis 2.0" derivatives products (edibles, vapes, beverages, and concentrates).

Charlotte's Web needs to pick up the pace

The pace at which other multi-state operators (MSOs) are expanding in the U.S. cannabis industry isn't looking favorable for Charlotte's Web. There' no doubt the company has a vast number of stores; with the acquisition of Abacus Health Products last month, it now has a total of 21,000 unique retail locations. However, cannabidiol products still face resistance from the U.S. Food and Drug Administration, and until then the market could be challenging.

While first-quarter results were better than expected for other MSOs, Charlotte's Web's lower business-to-business sales affected its total revenue growth for the quarter. Revenue for Q1 fell to $21.5 million from $21.7 million in the corresponding quarter a year ago. Moreover, the company failed to achieve positive EBITDA because of a 76.5% increase in its operating expenses to $23.3 million. Its EBITDA loss was about 5.7 million in the first quarter. For the full year, management targets positive profitability and revenue growth of 10% to 20%.

The choice is obvious

Green Thumb's strong fundamentals, leadership team, focus on robust markets, growth strategies, and strong balance sheet have boosted its stock price this year. Green Thumb and Curaleaf's shares have gained 26.1% and 15.7%, respectively, year to date, while Charlotte's Web's stock is down 53%. The market, as tracked by the SPDR S&P 500 ETF, is up slightly -- 0.34% -- for the same period. 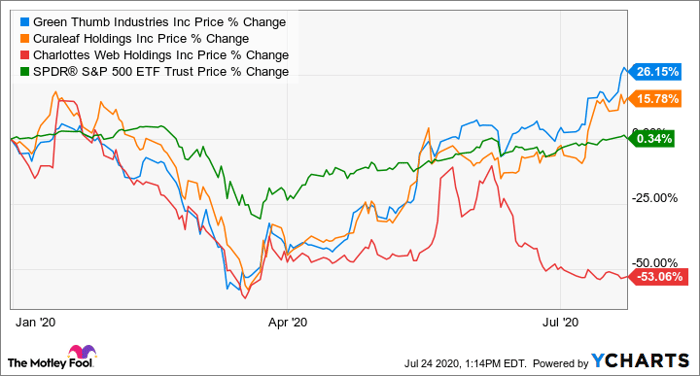 While Charlotte's Web still has room to grow, Green Thumb has clearly proved its potential. There appears to be no stopping the growth of this company. Its confidence to expand amid a pandemic, while most companies in other sectors are struggling to stay afloat, is applaudable -- making it a better marijuana choice for 2020.