As a clinical-stage immunotherapy company, Fate Therapeutics (NASDAQ:FATE) has a long way to go before it has recurring revenue, but it could make a few millionaires in the meantime. Thanks to its powerful platform that enables the efficient mass production of high-impact and high-complexity cellular therapies for cancers and immune disorders, its manufacturing technology licensing revenues alone could be a gold mine.

On the other hand, ambitious biotechs like Fate often fail to deliver on core promises as a result of unnavigable scientific obstacles, and inflated stock prices can easily lure investors into a speculative trap. Should Fate have a place in your aggressive maximum-growth portfolio, or is it too risky to touch? 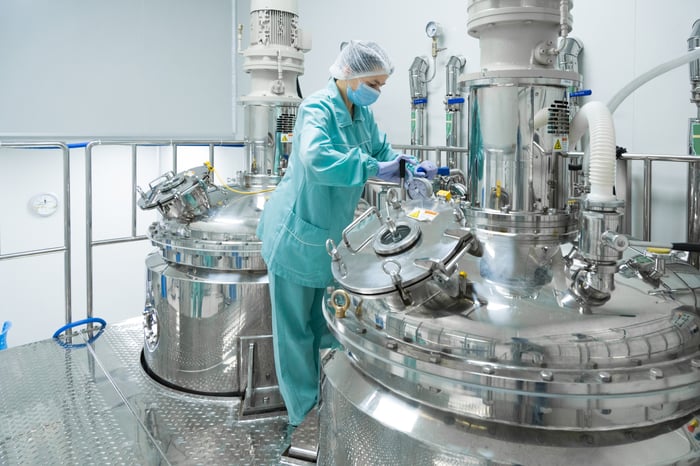 Fate's competitive advantage rests in its induced pluripotent stem cell (iPSC) platform. iPSC cells are notable because as stem cells, they can become nearly any type of cell. Historically, gathering non-induced stem cells required a donation of human cord blood, making them both expensive to produce and variable from donor to donor, in terms of their cellular properties. Manufacturing iPSCs in small numbers without a human donor isn't new, but the company's innovation is to genetically engineer and culture its iPSCs at scale by generating homogenous cell lines that can be cloned or expanded indefinitely without additional donations.

Because they are engineered, these cells have therapeutically relevant attributes, including the chimeric antigen receptors famously utilized in cancer immunotherapy to great effect. Fate's process prompts the engineered iPSCs to mature into whichever type of immune cell is best suited to address a specific pathology, such as a T-cell for cancer immunotherapy.

Critically, Fate's cells are grown from the same cell line rather than a patient's donated cells, making them more consistent in terms of their behavior. This also means that one engineered cell line can be manufactured as a therapy for many different patients, paving the way for an "off the shelf" immunotherapy -- a highly coveted goal in both academia and the private sector alike.

Unaffiliated researchers including Shoichi Iriguchi and Shin Kaneko of Kyoto University argued last year that such off-the-shelf solutions "will not only reduce the cost of manufacturing, but serve as an ideal platform for synthetic T cells." In short, the platform is itself a huge technological accomplishment that has been more than a decade in the making.

Aside from shouldering the massive risks inherent in drug development and the commercialization of a novel therapy that has never seen use in humans before, investors will need to tolerate dilutive actions to fund operations for the foreseeable future.

With only $203 million in cash in the most recent quarter and trailing 12-month expenses of $125 million, Fate raised $201.3 million from its most recent stock offering in June and announced that it planned to sell some of its shares to Johnson & Johnson (NYSE:JNJ) for about $50 million.

Despite all the promise of its platform, it's unclear exactly how much money will be saved by centralized mass production from the master iPSC cell lines, of whether the cells will be more effective than the current generation of cellular immunotherapies. 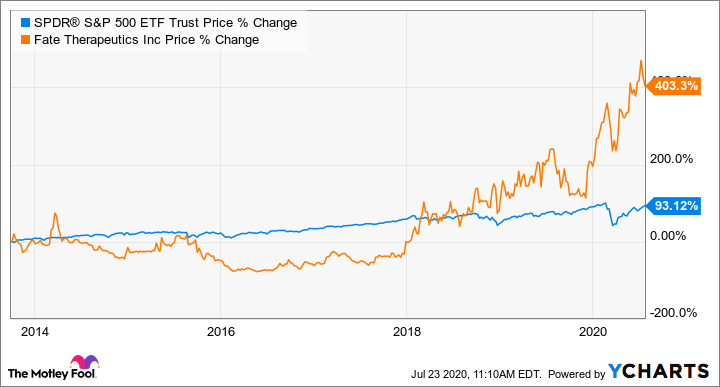 For a biotech company to succeed, having a great platform isn't enough; it's necessary to get a product through clinical trials and the regulatory approval process before there's even a chance to make a dime. On July 9, Fate's investigational new drug application for its iPSC-derived chimeric antigen receptor T-cell therapy for chronic lymphocytic leukemia was accepted by the U.S. Food and Drug Administration, paving the way for clinical development to proceed. This therapy, called FT819, is the very first of its kind, but it will be many years before it reaches the market, even if its clinical trials go according to plan.

Since its initial public offering in 2013, Fate hasn't always beaten the market, but it has since mid-2018, perhaps as a result of the hype surrounding its platform. I think it's a millionaire-maker stock on the basis of its platform's potential to drive down manufacturing costs for advanced immunotherapies. But until the company can offer a few estimates regarding the scale of these cost reductions, the stock is probably best for speculators.