Let's take a look at what's happened so far and what's on the horizon.

Moderna (MRNA -1.41%), Inovio Pharmaceuticals (INO -5.38%), and Novavax (NVAX -2.47%) have become household names these days -- at least to investors betting on who may win the coronavirus vaccine race. More than 20 companies and research institutes have brought their candidates into human testing at record speed. And the U.S. government's Operation Warp Speed -- an effort to shepherd a vaccine to market by January -- is paying out billions of dollars to promising candidates. 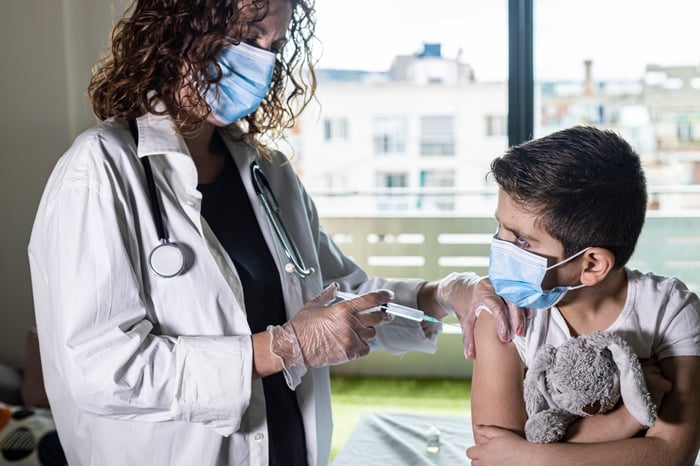 Now the big question is this: Who is leading this race? For some clues, let's take a closer look at some of the most talked-about companies vying for the opportunity to play a primary role in halting this global health crisis.

Moderna made a splash in March when it became the first company to bring its vaccine candidate into human trials. In phase 1, the biotech company studied its candidate in 45 volunteers age 18 to 55. Splitting participants into three dosage groups, researchers gave them two vaccinations, 28 days apart. Interim results showed neutralizing-antibody production in all participants. Most importantly, the 100-microgram group -- that's the dosage to be used in late-stage trials -- showed neutralizing-antibody levels were above those of recovered COVID-19 patients.

As for adverse events, three participants in the highest-dosage level -- 250 micrograms -- reported at least one that the company categorizes as "severe." Otherwise, the vaccine was well tolerated, and other adverse events were mild to moderate.

The company hasn't yet reported results in older and elderly adults, enrolled later in the phase 1 trial, or data from a phase 2 trial, involving younger and older adults. Moderna plans to begin a phase 3 trial in 30,000 volunteers on July 27.

Operation Warp Speed offered Moderna as much as $483 million, which the company said will support its vaccine development through regulatory approval and a manufacturing scale-up.

Inovio is another early player, beginning trials and reporting data a few weeks after Moderna. Inovio, in its interim phase 1 report, said 94% of the 36 participants age 18 to 50 showed immune response in week six after two doses of the vaccine. The company said this is based on data examining antibody and T-cell responses. But Inovio, disappointing investors, didn't provide further details on neutralizing-antibody levels.

As for safety, the vaccine was generally well-tolerated, with redness at the injection site being the most common adverse event. Inovio plans to start a phase 2/3 trial this summer. The company didn't provide details about the number of participants or age groups involved in the upcoming study.

Operation Warp Speed hasn't offered Inovio funding. But the U.S. Department of Defense awarded the company a $71 million contract to ramp up production of the Cellectra handheld device used to administer the vaccine.

AstraZeneca (AZN -1.80%) joined the race later than some. The company announced a collaboration with the University of Oxford on April 30. At that time, Oxford researchers, using expertise from earlier work on an investigational Middle East Respiratory Syndrome vaccine, had already begun testing their COVID-19 vaccine in humans.

In the AstraZeneca-Oxford study, researchers gave 533 participants the investigational vaccine in one dose. They gave another 10 volunteers two doses. And finally, the control group included 534 participants. All volunteers were age 18 to 55.

About a month after vaccination, 91% of volunteers produced antibodies that could neutralize the virus, one type of assay showed. A more stringent assay showed 37% of trial subjects produced antibodies with potential to neutralize. And finally, the more stringent assay showed the best results for those who received two doses of the vaccine -- all of those participants produced neutralizing antibodies. The researchers said antibody levels were comparable to those in recovered COVID-19 patients. They also reported an increase in T-cell numbers, with a peak two weeks after vaccination and duration up to a month following vaccination.

Participants didn't report serious adverse events. The researchers said events included pain at the injection site and flu-like symptoms the day following vaccination. AstraZeneca and Oxford began recruiting for the phase 2/3 trial in May. That study will involve more than 10,000 volunteers. The phase 2 portion will expand into ages five to 12, 56 to 69, and over 70. The phase 3 part will explore the vaccine's performance in a large group of adults 18 and older.

AstraZeneca is one of the big winners when it comes to support from the U.S. government. Operation Warp Speed offered the company $1.2 billion, the second-biggest award.

The Pfizer (PFE -3.32%) and BioNTech (BNTX -1.45%) team are exploring four possible vaccines for COVID-19, and the U.S. Food and Drug Administration recently granted Fast Track status to two of them. The companies also recently reported phase 1/2 data regarding the most advanced of these two candidates in a U.S. trial. Participants receiving two doses of vaccine at two different dosage levels showed neutralizing-antibody levels at 1.8 and 2.8 times the level seen in COVID-19 patients. Researchers didn't report serious adverse events.

A German phase 1/2 trial confirmed the findings and showed the vaccine candidate produced high-level T-cell responses. T-cell response varied among participants and didn't seem linked to dosage, the companies said. Pfizer and BioNTech plan on advancing into a phase 2b/3 study in as many as 30,000 people later this month.

Operation Warp Speed hasn't offered the companies vaccine development funds. But the U.S. government has pre-ordered 100 million vaccine doses for $1.95 billion and may order as many as 500 million more doses. The award depends on the companies' ability to receive regulatory approval for the vaccine.

Chinese companies CanSino Biologics (6185 -0.84%) and Sinovac Biotech, from a timeline perspective, are leading this vaccine race. The companies have reported phase 2 data and are heading into phase 3 trials.

Let's start with a look at CanSino. The company tested its vaccine in phase 2 on 508 participants in one of two dosages or placebo. The vaccine resulted in the production of neutralizing antibodies in 59% of one dosage group and 47% of the other dosage group. The vaccine also led to T-cell responses in more than 88% of volunteers. Though most participants were in the 18-to-44 age group, 13% of trial volunteers were age 55 or older. And in this older group, neutralizing-antibody response was low in both dosage groups.

CanSino will have to see how that issue may be addressed, especially considering the need for a vaccine in older populations. The company plans to launch its phase 3 trial in 40,000 participants in Russia, Brazil, Chile, and Saudi Arabia.

Sinovac said its phase 2 trial in 600 volunteers age 18 to 59 showed the production of neutralizing antibodies in more than 90% of participants. Brazil's regulatory body approved the company's plan to conduct a phase 3 trial with Instituto Butantan, a Brazilian biologic research center. The trial may begin enrolling participants this month.

Novavax shares have gained more than 75% since Operation Warp Speed, in its biggest award yet, offered the company $1.6 billion. Unlike the other companies I've mentioned, Novavax hasn't yet reported data from its initial human trials. The company recently offered a clue though: According to an Evaluate report, Novavax indicated trial results would include details on T-cell response and antibodies. Novavax said it would release data during the first week of August.

So here's what we know about Novavax at this point. Novavax began the phase 1 part of its phase 1/2 trial in Australia in May. It involves 130 participants age 18 to 59. Phase 2 will expand to include a broader age range and include volunteers in various countries including the U.S. The company said pre-clinical studies demonstrated the vaccine's ability to produce a strong immune response and high levels of neutralizing antibodies.

It's difficult to call Novavax a true leader at this point, due to the absence of human-trial data. But hefty government funding and the company's experience bringing its flu vaccine successfully through phase 3 trials offer us reasons to be optimistic about its abilities.

It's too early to say. Anything can happen in clinical trials, and one small detail could slow the progress of a promising candidate (that may eventually gain regulatory approval). Only the data will determine the winner, so that's where our focus should be. No matter which company makes it to the finish line first, ultimately, the company with the best vaccine will rise to the top.

Which company has the best vaccine? It's too early to answer that question too. That's because each company has announced various elements -- but we don't have enough information on every point to make reliable comparisons. But as companies move into later-stage trials, we may have a better chance of doing so.

Looking ahead, we should focus on two elements. First, neutralizing antibodies. Though it's unclear what levels are necessary for immunity and how long that immunity will last, these antibodies still remain a major piece of the vaccine puzzle. Hopefully, further testing may remove some of the unknowns. And second, vaccine performance in the elderly. They have been most vulnerable during the crisis, and so they are among the most in need of a vaccine.

Finally, more than one biotech or pharmaceutical company may win this vaccine race. So, if your favorite isn't first to market, that doesn't mean its coronavirus vaccine story is over.