Wells Fargo (NYSE:WFC) has taken a chainsaw to its dividend. The company announced Tuesday that its board of directors formally declared a quarterly common stock payout of $0.10 per share, payable on Sep. 1 to investors of record as of Aug. 7. That level is down considerably from the $0.51 it previously paid.

The cut, however, was entirely expected -- in fact, the bank set that $0.10 in its second quarter earnings release. Even at that point, speculation was rife throughout the banking world that a chop was coming, and that it would be significant. 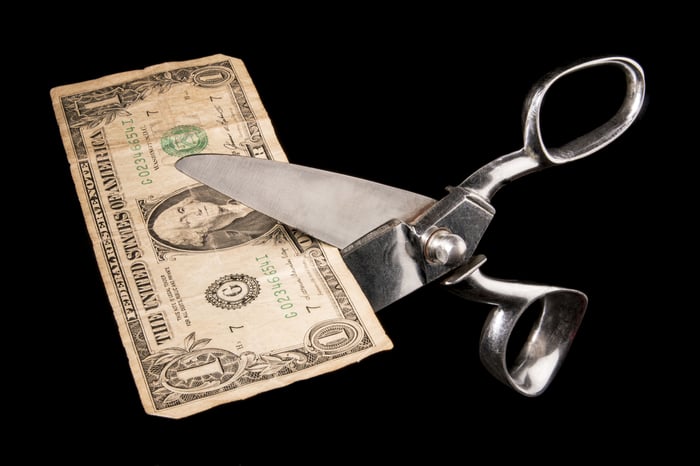 Already struggling with an asset cap mandated by the Federal Reserve, plus a damaged reputation arising from a series of scandals, Wells Fargo had to batten down the hatches in the wake of the coronavirus outbreak. As with other lenders, it has sharply increased its loan loss provisioning in anticipation of widespread defaults from borrowers affected by the economic damage inflicted by the pandemic.

The second quarter was not a quarter for the ages; that combination of factors helped drive Wells Fargo's revenue down by 18% on a year-over-year basis, and flipped its bottom line deep into the red at $2.4 billion.

The big dividend cut lowers Wells Fargo's yield considerably. At the most recent closing stock price, the new payout's yield would be just under 1.6%.

As investors have known for several weeks that this has been coming, the news did not hit Wells Fargo's stock hard. In fact, the shares rose slightly on Tuesday, by just under 0.2%. By contrast, the wider stock market fell marginally on the day.