Over the last three years, Amazon has taken more money from the U.S Treasury than it's paid in. That could finally end.

Few megacap companies have been as successful as Amazon (AMZN -0.66%) at dodging the tax collector. Throughout its history, the tech titan has employed a number of tactics to reduce its tax bill in the U.S.

For years, the company resisted collecting sales taxes, exploiting a loophole in the tax code to give it an advantage over brick-and-mortar retailers, before changing its tune once that law was no longer in its interest. Even today, it doesn't always collect sales taxes, and many of its third-party retailers also don't. By operating close to breakeven for much of its history, Amazon also brought its tax bill to near zero, and its very public search for a second headquarters, dubbed a "beauty contest" by detractors, was an often shameless display of tax-break solicitation.

The issue has caught the eye of a number of politicians and activist organizations, including the Biden campaign, which is targeting Amazon and other companies that make billions in profits but pay close to nothing in federal taxes. 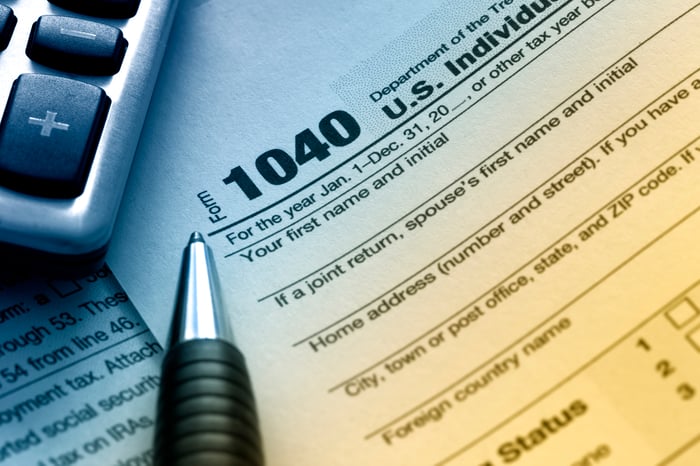 According to The Wall Street Journal, the Biden campaign is proposing to impose a minimum tax rate of 15% on companies earning more than $100 million, in addition to other changes, like raising the corporate tax rate from 21% to 28%. The plan would seek to undo at least some parts of the windfall that corporations got from the Tax Cuts and Jobs Act passed at the end of 2017, which lowered the corporate tax rate from 35% to 21%, among delivering other favors for big American companies.

The campaign seems to believe the issue is a political winner, as it's ostensibly unfair for a company worth $1.5 trillion to pay almost zero to Uncle Sam, especially during an unprecedented crisis like the coronavirus pandemic. Campaign spokesperson Michael Gwin told the Journal, "[I]t's absolutely unacceptable for some of the biggest companies in America, like Amazon, to pay next to nothing in taxes."

Companies like Amazon benefit from federal tax credits for investments in areas like research and development and renewable energy, as well as tax-advantaged accounting methods like accelerated depreciation. In its 2019 annual report, Amazon said it had approximately $1.7 billion in federal tax credits as of the end of last year, primarily from research and development incentives, though it expected its tax bill to increase as it used up those credits. The company also benefits from deductions for excess stock-based compensation, as well as accelerated depreciation, which was enhanced by the Tax Cuts and Jobs Act.

Notably, Amazon's tax treatment in the U.S. has been much cushier than abroad. Last year, it paid $1.14 billion in international taxes, despite generating a pre-tax profit of just $691 million outside the U.S.

This is far from the first time that Amazon has been in the tax-avoidance spotlight. Earlier in the presidential campaign, Democratic candidates harped on the company for getting a net tax benefit, and Joe Biden tweeted, "No company pulling in billions of dollars of profits should pay a lower tax rate than firefighters and teachers." Amazon fired back:

We pay every penny we owe. Congress designed tax laws to encourage companies to reinvest in the American economy. We have. ... Assume VP Biden's complaint is w/ the tax code, not Amazon.

Amazon CEO Jeff Bezos was set to testify in front of Congress today as part of an antitrust inquiry into several big tech companies, and it's a good bet that the tax issue will come up as the two are connected. Amazon, for example, had a competitive advantage over brick-and-mortar retailers during the years when it didn't have to collect sales taxes in states where it didn't have a physical presence. It's also leveraged its market power to extract local tax benefits as it did with its HQ2 search and does regularly when it opens new warehouses.

As the presidential campaign heats up, Amazon could find itself as a whipping boy from both sides, as each candidate has lobbed attacks at the company. President Trump regularly derides the e-commerce leader, attacking it for its history of tax avoidance. He also has a strong dislike for the Bezos-owned The Washington Post.

Either way, during a time of double-digit unemployment and rampant small-business failures, Amazon, with its monopoly-like power and minuscule tax bill, looks like an easy target. If Biden wins in November, the company could end up paying billions more in federal taxes.