F5 Networks (NASDAQ:FFIV) posted better-than-expected fiscal third-quarter results, despite the coronavirus pandemic. The application delivery specialist is transitioning from its legacy hardware business to a software-based portfolio, and during the earnings call, CEO Francois Locoh-Donou announced its long-term plan: developing a unified platform for adaptive applications. Here's what that means for the company and its shareholders.

F5 transformation is on its way

But with the shift to cloud computing, enterprises have been moving more infrastructure and applications to the cloud, making F5's legacy on-premises products less relevant. As a result, the company adapted its portfolio with software solutions that deal with cloud applications and infrastructure. 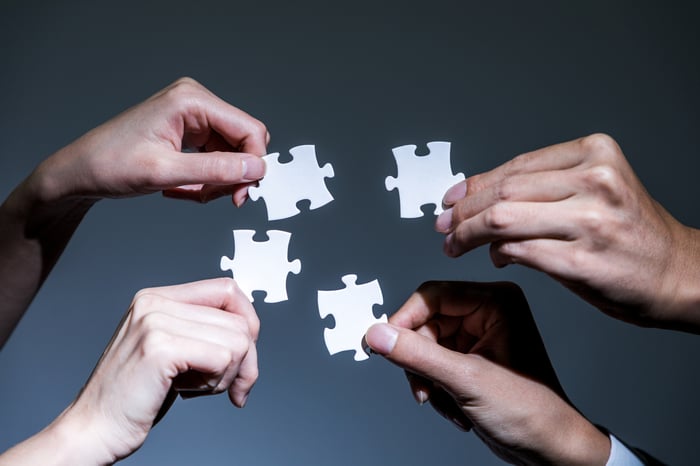 The company's fiscal third-quarter performance confirmed that the shift to software is materializing. Revenue increased by 4% year over year to $586 million, with services up 5% to $330 million. But that revenue growth partially hides the divergent trajectories of F5's hardware business (down 12% to $159 million) and software solutions (up 43% to $97 million).

That strong software revenue growth was boosted by the company's recent acquisitions of the ADC specialist NGINX and the cybersecurity outfit Shape Security, though. Excluding acquisitions, revenue from the software segment would have grown by only 14% year over year.

The decline of F5's legacy hardware business should continue over the long term. During the earnings call, Locoh-Donou discussed the long-term strategy to offset that decline and keep growing the company's software business over the next several years with a solution for adaptive applications. But what does that mean, exactly?

As enterprises move their applications to the cloud, they benefit from the capacity to scale resources on demand. However, cloud computing also involves extra challenges. Securing and optimizing applications across multiple public and private clouds has become more complex, as it requires several layers of solutions with different tools, sometimes from different vendors.

F5 aims to create a unified platform to simplify and automate the management of cloud-hosted applications by leveraging its existing solutions. The company has already integrated some of its different components following recent acquisitions. For instance, its Silverline managed services platform now integrates Shape Security's technology.

But F5 will take that integration a step further, leveraging its telemetry capabilities with its core application delivery services that sit between users and applications. With the collected information, it will feed Shape Security's artificial intelligence engine to create an analytics platform that will lead to business insights. Applications will use that knowledge to automatically scale and protect themselves depending on demand and security threats, for example.

The strategy makes sense. It allows F5 to leverage its existing software solutions and propose a differentiating and innovative offering aimed at addressing a growing pain for enterprises.

Yet the market doesn't seem to expect adaptive applications will boost the company's top line over the long term. F5 stock trades at modest enterprise value-to-sales and forward price-to-earnings (P/E) ratios of 4.1 and 15.2, respectively, which contrast with the lofty valuations of some high-growth tech stocks.

In addition, despite the pressure on its operating margins because of its recent acquisitions of NGINX and Shape Security, the company remains profitable. Its third-quarter non-GAAP (adjusted) operating margin dropped to 28.6% compared to 33.1% in the prior-year quarter, but margins should improve as F5 integrates and scales those acquisitions.

Also, with $813.4 million of cash, cash equivalents, and short- and long-term investments in excess of total debt at the end of last quarter, the company seems immune from financial challenges if a prolonged recession materializes.

Shareholders should remain patient, though. The planned unified platform for adaptive applications is a long-term effort that should become visible in the company's financial results beyond the next couple of years.