Please ensure Javascript is enabled for purposes of website accessibility
Log In Help Join The Motley Fool
Free Article Join Over 1 Million Premium Members And Get More In-Depth Stock Guidance and Research
By Luis Sanchez CFA – Jul 29, 2020 at 8:45AM

Velodyne's lidar technology helps autonomous vehicles map out what's going on around them.

Special purpose acquisition company (SPAC) Graf Industrial Corp. (GRAF) announced earlier this month that it will acquire Velodyne Lidar, a company that supplies 3D mapping for self-driving car capabilities. After completing the acquisition sometime in the third quarter of 2020, Velodyne will become the first pure-play lidar company available for investors in the public market.

Let's take a closer look at this particular SPAC and whether it has the makings of a new potential growth stock for investors to consider.

Velodyne is a leading lidar technology company that focuses on allowing cars to become self-driving by using light detection and range lasers, which are able to create a visual representation of the surrounding environment for the vehicle's computers to use as part of self-driving operations. 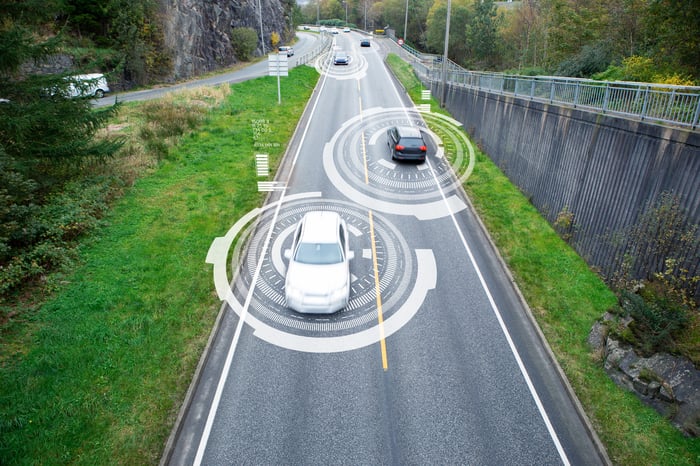 Back in late 2018, Graf Industrial initiated its IPO effort with the specific intention of being a SPAC, which means it is a shell company (also referred to as a "blank check" company) purposely created so that the cash it raised from its own IPO would be used to acquire a company and effectively take that company public through the merger. Graf Industrial's deal to acquire Velodyne is the culmination of the SPAC effort. The merger paperwork values the combined company at $1.6 billion. The acquisition still needs to be approved by the SPAC's shareholders. Once finalized, Graf Industrial will be renamed Velodyne Lidar and trade on the NYSE under the new ticker symbol VLDR.

Velodyne will use the proceeds from the deal to capitalize its balance sheet with $190 million of cash. This cash will be invested in the company's production capacity and is aimed at fueling future growth.

Lidar is a critical technology enabling cars to become self-driving. Velodyne is a pioneer in lidar technology and continues to be at the forefront of the industry. Founded in 2005 by David Hall, the company was able to bring down the cost of lidar so that it could be commercialized by the automotive industry.

Lidar is an acronym for "light detection and ranging." It is easy to think of this term as using lasers to map current surroundings and objects in real-time. The lasers that lidar technology uses are everyday common lasers that are found in barcode readers and security cameras. The lidar sensor uses a light photon to hit an object and bounce back to the lidar laser to measure the distance and time of non-stationary objects such as cars or pedestrians. As much as 128 laser beams are used to measure the surrounding environment, capturing billions of data points in a 360-degree view.

This is a potentially revolutionary technology that will have a major impact on autonomously operated machines including autonomous cars as well as robots.

Velodyne has licensed its technology through long-term developmental contracts with leading manufacturers in the automotive and robotics industries. Velodyne's commercial partners include Ford, Nikon, and Hyundai, but the company says it has served over 300 customers since it began operations.

Last year, the company generated over $100 million in revenue. With the rising interest in autonomous technology, Velodyne expects sales to rise six-fold and exceed $600 million by 2024. The company is currently unprofitable, although it believes it can be cash flow positive within three years if its growth expectations materialize.

But Velodyne management is also quick to point out that it has plenty of non-automotive applications for its lidar technology, including mapping, robotics, and driver assistance systems. These applications, in fact, currently account for three-quarters of the company's total revenue.

As already noted, becoming a public company will provide Velodyne with access to capital it needs to accelerate its expansion efforts. The massive expected market for autonomous cars could potentially set Velodyne up as a winning growth stock.

For those looking to invest in disruptive technology companies that are just starting out as a public company, Velodyne could be a good fit. If the world gets the smart cars and robots we all expect, Velodyne is almost sure to play a prominent role in that shift.