Please ensure Javascript is enabled for purposes of website accessibility
Log In Help Join The Motley Fool
Free Article Join Over 1 Million Premium Members And Get More In-Depth Stock Guidance and Research
By John Ballard – Jul 30, 2020 at 9:15AM

Robinhood's list of the 100 most popular stocks among its users includes Apple (AAPL 0.66%), Snap (SNAP 2.65%), and Zynga (ZNGA). Apple is currently the sixth most-owned stock by Robinhood investors, followed by Snap at No. 15, and Zynga at No. 31.

All three have recently been flirting with new all-time highs. Here's why these stocks could still deliver satisfactory returns going forward. 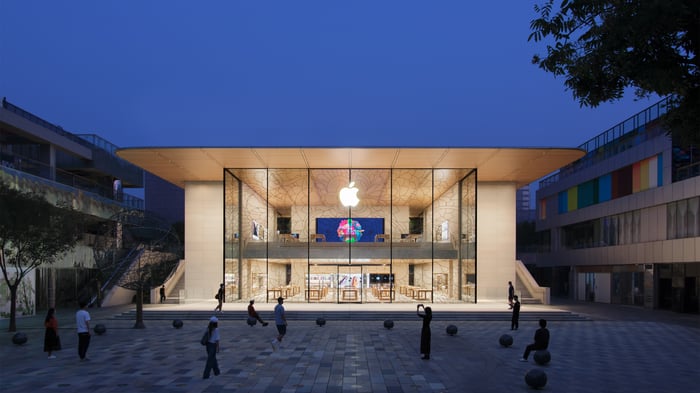 The Apple Store in the Sanlitun area of Beijing. Image source: Apple.

"Not only is our large and growing installed base a powerful testament to the satisfaction, engagement, and loyalty of our customers, but it's also fueling our growth across the board, particularly in services," Cook said during the fiscal first-quarter conference call in January.

Apple continued to show strong growth in services (e.g., Apple Music, the App Store, cloud services, and Apple TV+) during the most recent quarter at the start of the COVID-19 crisis. Services revenue grew 16.6% year over year in the quarter ending in March. CFO Luca Maestri mentioned during the conference call in April that the company expected continued strong performance with the App Store, video, Apple Music, and cloud services throughout the quarter ending in June.

Most of the company's revenue still comes from hardware products like the iPhone. Some analysts are bullish on the prospects of a strong upgrade cycle for the highly anticipated 5G-enabled iPhones expected to launch this fall, although it's still unclear whether the new iPhone will be delayed by the COVID-19 crisis.

Regardless of when the new iPhones launch, Apple's massive installed base is leading to higher sales of services and ancillary products such as wearables, which grew 23% year over year last quarter. Plus, Apple's business churns out tons of free cash flow to fund a rising stream of dividend payments.  The dividend yield currently sits at 0.82%. 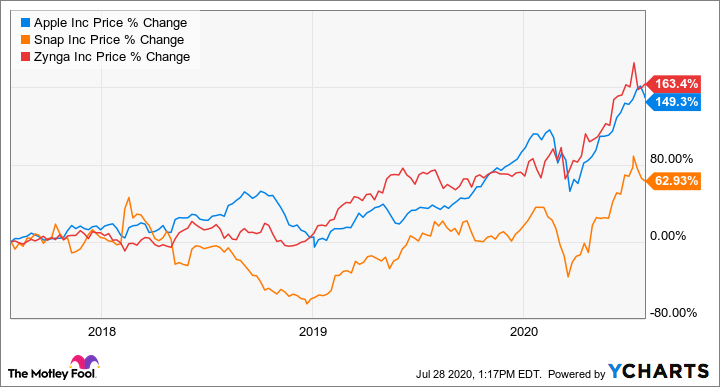 Snap is well-positioned for the shift of digital advertising spending to social media channels. It has a growing community of 238 million people using Snapchat every day, and Snap is steadily trickling out new augmented reality (AR) capabilities and features to keep those users engaged.

But Snap is much more than an AR camera that puts bunny ears on your head. Snap recently announced an expanded multiyear partnership with Disney, its ESPN division, Comcast's NBC, ViacomCBS, the NBA, and the NFL to create original content exclusively for Snapchat users. In the second quarter, the daily average number of Snapchatters that consumed Snap Shows increased by 45% year over year.

Despite a challenging advertising environment, Snap still posted solid growth of 17% in revenue in the second quarter, ending in June. Its original-content deals and investments in new ad services, such as Dynamic Ads, position the platform very well to re-accelerate revenue growth when ad spending picks up again. 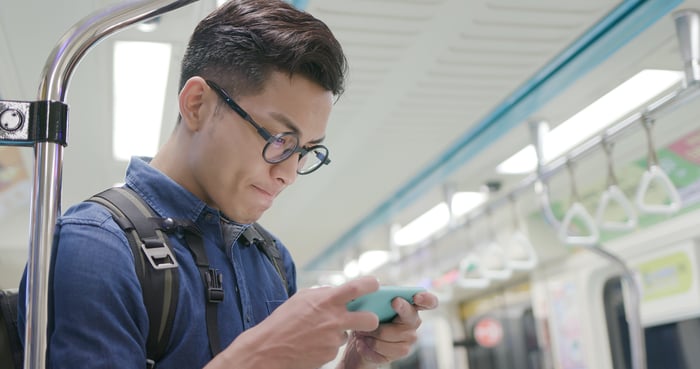 Video games saw a significant increase in engagement during the shelter-in-place period. Nowhere was that more evident than in the performance at Zynga, one of the leading mobile-game makers. The company posted its highest first-quarter revenue and bookings in history, with revenue up 52% year over year, and bookings up 18% year over year to $425 million.

Zynga makes most of its money from in-app or in-game purchases, with a minor amount generated from advertising. Higher player engagement from paying users offset a pullback in ad spending during the first quarter.

Management expects full-year 2020 revenue and bookings to be up 25% and 15%, respectively. Zynga will be launching new titles in the second half of 2020, following the soft launch of Harry Potter: Puzzles & Spells, Puzzle Combat, and FarmVille 3.

Long term, Zynga has a strong roster of mobile titles, including CSR Racing, Empires & Puzzles, Merge Dragons!, Zynga Poker, and Words With Friends, among others, to drive growth in a $77 billion mobile game market.

What's more, Zynga's profits are soaring as the business scales. Trailing-12-month free cash flow stands at $199 million, up 134% over the last three years. Management recently put some of its cash to work by acquiring Istanbul-based Peak for $1.85 billion. Peak adds top titles such as Toon Blast and Toy Blast to its arsenal and will grow Zynga's daily active user base by 60%, providing many more users to monetize.

Hold these stocks for the long haul

Shares of Apple, Snap, and Zynga are currently up 28%, 40%, and 58%, respectively, year to date at the time of this writing. But great growth stocks will continue to hit new highs over time. These companies have trends working for them that could multiply an initial investment if you hold them for the long term.