Please ensure Javascript is enabled for purposes of website accessibility
Log In Help Join The Motley Fool
Free Article Join Over 1 Million Premium Members And Get More In-Depth Stock Guidance and Research
By Lou Whiteman – Updated Jul 30, 2020 at 10:24AM

Aerospace manufacturers are bracing for an extended downturn.

Airbus (EADSY -0.51%) expects to keep new plane production rates low through at least 2022 as it braces for a prolonged impact from the COVID-19 pandemic.

Both Airbus and Boeing (BA -3.39%) have seen pressure on their order books as the pandemic has cut into travel demand and has caused airlines to scale back flying and look to cut costs. With the global aviation industry taking on billions in new debt to survive the pandemic, many carriers formerly in expansion-mode will instead be using funds to pay down loans for years to come. 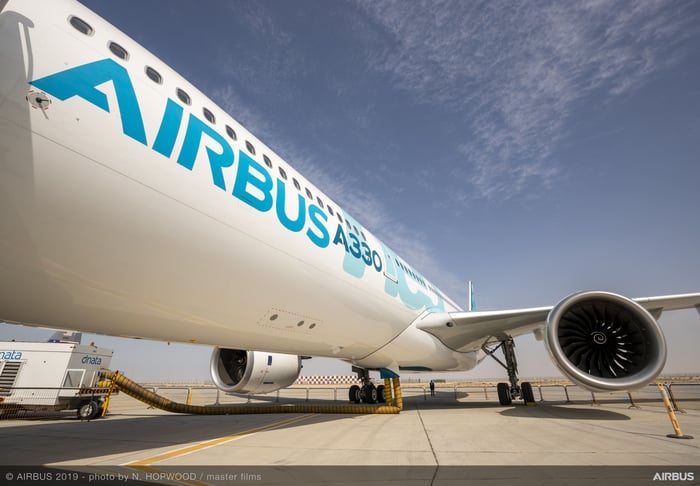 Earlier this year, Airbus announced a series of production cuts in response to falling demand. On Thursday, Airbus said it would further cut production of its A350 widebody aircraft to five per month from six. Airbus doesn't expect to increase production until at least 2022, a sign that it sees no quick escape from the current crisis.

The company made the comments while reporting a first half loss of €1.9 billion ($2.2 billion), compared to a profit of €1.2 billion in the first six months of 2019.

Commercial aviation coming into 2020 enjoyed an unprecedented 16 year up cycle in new plane sales, but historically this has been a boom and bust industry with a downturn every seven years, according to Teal Group research.

Airbus burned through €12.4 billion in cash during the first half, but only €4.4 billion of that outflow came during the second quarter as cost cutting efforts worked through the system.