Investing in manufacturing businesses can be a wild ride, and the semiconductor industry is no exception. Sensitive to supply and demand trends and driven by event-like hardware upgrade cycles, these tech stocks can yield some incredibly wild swings in price. That's particularly evident in the digital memory chip space.

Seagate Technology (STX) is coming out of a multi-year cyclical downturn along with its peers in the memory industry, driven by strong demand for cloud computing during this coronavirus-influenced year. The ensuing economic crisis is rendering many businesses and legacy operations redundant, creating an enduring outlet for this company's wares. It is far from the highest-growth semiconductor outfit out there, but for investors in search of yield, there was plenty to like after Seagate provided its mid-year 2020 update. 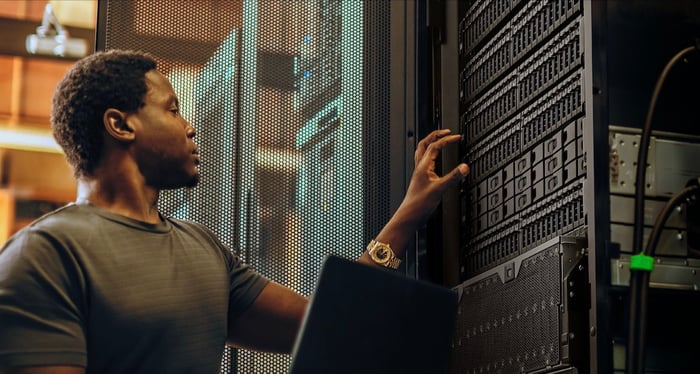 Cloud growth is the story of the year

And with the lockdown came a mad dash to upgrade operations for a new digital era. Seagate got some benefit here as it had strong demand for cloud and edge computing applications during its fiscal 2020 fourth quarter (the three months ended July 3, 2020). Though offset by weak demand in other end markets -- including consumer devices -- mass storage enterprise sales grew by 25% in Seagate's full-year fiscal 2020 period. And fourth-quarter revenue and adjusted net income increased 6% and 17%, respectively, although most full-year results ended in slightly negative territory.

Also relevant for our discussion here was that Seagate once again returned some 80% of its $274 million in free cash flow (basic profitability measured as revenue less cash operating and capital expenses) in the quarter via its dividend ($168 million) and stock repurchases ($55 million). As wild a ride as it's been for this digital memory maker in the last year, it's remained profitable enough to continue doling out payments to its shareholders.

Don't be too underwhelmed

Revenue in fiscal 2021 is expected to be relatively flat with 2020 revenue, again supported by the company's mass storage enterprise customers for cloud and edge computing offset by weakness elsewhere. For investors expecting a massive rally for HDDs as the economy begins to put itself back together again, the outlook is disappointing. Micron Technology (MU) is a better bet for investors looking for a memory chip stock with more share price upside, in my opinion. As for Seagate, though, it still has limited visibility on the year ahead. Perhaps the numbers will ultimately be better than the current outlook. Time will tell.

But according to Seagate's research, digital data is expected to grow by 42% in each of the next two years. HDDs with 18-terabyte capacity began shipping early this year, with 20-terabyte devices on the way by late 2020 and a path to 50-terabyte capacity and beyond on the roadmap. That bodes well for the company's slow-and-steady operations, in support of its dividend and share repurchase plan. At this point, this is one cheap stock. The ho-hum guidance for the next year sent shares tumbling 10% the day following the earnings update, and the stock now trades for 10 times trailing-12-month free cash flow. And the dividend (excluding any ongoing share repurchases) now yields a hefty 5.9% a year.

Seagate is far from an exciting technology stock as digital data and cloud computing continue to advance. But for investors looking for investment income, there's plenty to like after the company's last earnings update.