Please ensure Javascript is enabled for purposes of website accessibility
Log In Help Join The Motley Fool
Free Article Join Over 1 Million Premium Members And Get More In-Depth Stock Guidance and Research
By Lee Samaha – Jul 30, 2020 at 7:49AM

Looking at the investment case for buying the consumer discretionary stock.

You have to hand it to iRobot (IRBT -0.34%). The company has returned to form in 2020 and seemingly allayed fears that its margin and sales growth prospects were under threat due to intense pricing competition from rivals. The company's latest results were ahead of internal expectations and management gave an upbeat outlook for the second half. However, it's far from clear whether the excellent results are some sort of existentialist victory, or whether they are being driven by temporary factors. Let's take a look at what you need to know before buying the stock. 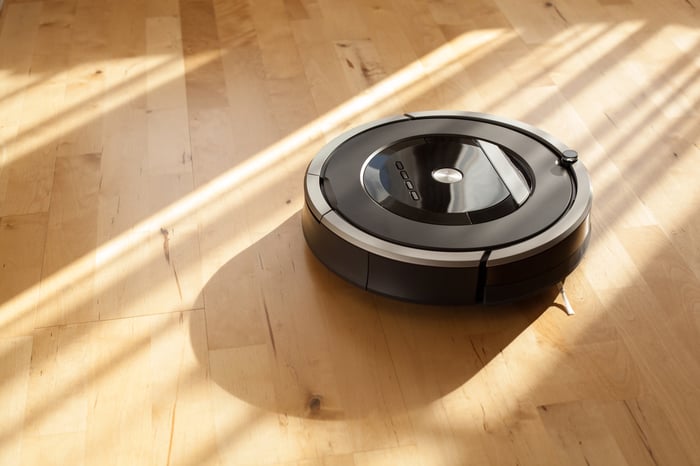 A difficult 2019 for iRobot

Last year iRobot had a problem. The imposition of tariffs on products from China had increased its costs so the consumer discretionary company decided to increase prices. In comparison, its competitors decided to maintain prices. The result? iRobot suffered a sales shortfall in August and September compared to management's prior expectations. Consequently, iRobot was forced to cut prices back to pre-tariff levels and sales subsequently came back.

The company's experience in 2019 suggested it might not have as much pricing power as previously expected. Of course, this is a significant concern for a company with dominant market share. In other words, it's possible that rivals can grab share simply by cutting prices. In fact, its rival SharkNinja was believed to be aggressively pricing its products. The heat was being turned up in iRobot going into 2020.

iRobot turns the tables in 2020

Fast forward to 2020, and it's almost a complete turnaround. The recent second-quarter results saw management lauding its ability to sell its premium robot vacuum cleaners (RVC). Speaking on the earnings call CEO Colin Angle said customers bought iRobot's premium RVC products because they wanted "better control over the experience what the robots clean, where they go and how they operate and how they can direct the robot to do what they want."

Indeed, sales of premium robots priced above $500 rose a whopping 43% in the second quarter. As such, the company managed to increase revenue by 8% even as units shipped fell by 2.8%.

Moreover, Angle expects the launch of a new Roomba (RVC) later this year to help the company achieve mid-single-digit growth in the second half. As such, full-year 2020 sales are now expected to increase by low-singe-digits compared to a previous estimate for a decline.

Of course, the question now turns to whether the sales strength in the second quarter is hard evidence that customers are willing to pay more for iRobot's premium products on an ongoing basis, or whether it's merely a short-term boost driven by stay-at-home measures?

There's little doubt the social isolation measures have skewed sales across many industries related to the home. For example, PPG Industries saw DIY paint sales improving in its second quarter and Scotts Miracle-Gro saw its gardening and marijuana equipment sales grow strongly too.

Similarly, it's likely that iRobot also received a boost due to the increased focus on domestic activities. In addition, the company's dominant position may have made it easier to generate e-commerce based sales. In fact, "e-commerce related revenue grew by approximately 50% in Q2 and represented over 70% of total quarterly revenue" according to Angle on the earnings call. While this is an excellent result, it's not clear how consumers will react when traditional retailers open up again, particularly if iRobot's competitors start discounting prices.

In addition, the company faces some margin headwinds due to the expiration of a tariff exemption at the end of July, unless there is an extension to the end of 2020. No matter, there will still be some pressure on costs as manufacturing is shifted to Malaysia from China over the next couple of years.

iRobot had a very good quarter and there's evidence to point to success in its aim of achieving pricing power by delivering premium quality products to the market. However, iRobot was forced to cut prices in 2019, and there's no guarantee that what the company saw in the second quarter was a temporary boost due to stay-at-home measures. Also, competitors are likely to respond when retailers open up fully.

With the stock now trading on nearly 30 times forward price to earnings estimates, it's hard to argue that its valuation is compelling enough to buy under the circumstances. After all, the company is increasingly relying on higher-ticket item sales as the economy enters an uncertain period.