There wasn't a lot of sizzle in Shake Shack's (NYSE:SHAK) latest set of quarterly results. Like so many other restaurant operators and consumer goods businesses, the better-burger purveyor has been hit hard by the economic crunch engendered by the coronavirus outbreak.

As proof, we have Shake Shack's Q2 results, which were released after hours on Thursday. These revealed that total revenue fell by almost 40% year over year to $91.1 million, on the back of same-restaurant sales that cratered by 49%. 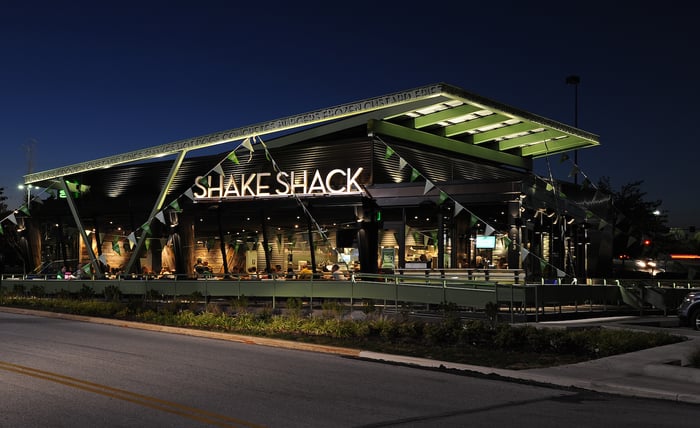 On the bottom line, the company posted a non-GAAP (adjusted) loss of $18.3 million, or $0.45 per share. That was a big change of fortune from the year-ago quarter, when Shake Shack booked a $10.2 million profit.

Analysts tracking the stock had estimated the company's adjusted per-share earnings would be $0.37 and its revenue would come in at just over $93 million.

Although the Q2 results were quite discouraging, Shake Shack waxed upbeat about how its business has been developing lately. In the earnings release, it said that it "has experienced gradual improvement in the business during the second quarter of 2020, and third quarter to date."

One particular bright spot was digital ordering. This saw a significant rise, especially in the latter part of the quarter. All in all, sales from it more than doubled in Q2 over the same quarter a year ago.

Nevertheless, Shake Shack's stock was taking a beating in after-hours trading following the release of the quarterly results. It was down by 5.6%, far steeper than the declines of peer consumer goods stocks and the wider equities market during the trading day.