This company has much to gain when pandemic effects are behind us, and its share price hasn't rebounded from March lows as much as the overall market.

Some parts of the stock market have rebounded from their March lows. Some have recovered to levels close to, or even above, pre-pandemic crisis levels. Even long-term investors may understandably be thinking about taking some profits with all the uncertainty related to a virus resurgence, economic fallout from bailouts, and potentially permanent damage to some businesses.

But trying to time the market with when to sell, and when to buy back, isn't an effective strategy for long-term holdings. Diversity in a portfolio is a much smarter approach. One well-known blue chip company can offer that with its own businesses. Its share price also hasn't rebounded to near previous highs, putting it in a position to have more upside from a business recovery than downside from another market downturn. 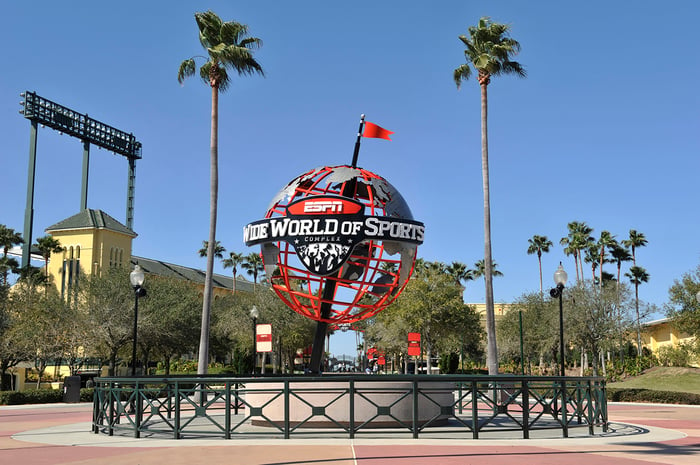 Prior to the pandemic, The Walt Disney Company (DIS 0.84%) was transforming its business, with its media and direct-to-consumer segments becoming increasingly important revenue contributors.

Data source: Disney financial filings. Note: Numbers add up to more than 100% due to inclusion of intersegment content transactions that are subsequently eliminated from total revenue.

The addition of Hulu streaming TV under its control and the initial success of the ESPN+ and Disney+ streaming services emphasized the focus on these segments. As of March 28, 2020, paid subscribers for these combined services totaled 73.5 million.

But, of course, much of Disney's business ran into a wall with the onset of the pandemic. Disney is uniquely diversified, but still integrated. A big part of its success has been tying its movie characters into the parks segment and the cruise ships. The pandemic brought a halt to movie production, delays in new releases, the docking of cruise ships, and the closing of its theme parks. And ESPN struggled just to have content to keep broadcasting as sports leagues were suspended.

Investors in the stock experienced the associated downward reaction in its share price. Yet all of these affected businesses will eventually come back. Parks are reopening at limited capacities with new safety protocols, and ESPN's Wide World of Sports is hosting the NBA "bubble" for the completion of its season.

Though off its March lows, Disney's share price hasn't rebounded along with the general market. A share price down almost 20% year to date implies that pandemic-related effects remain somewhat built in, with potential upside for investors as things eventually improve. 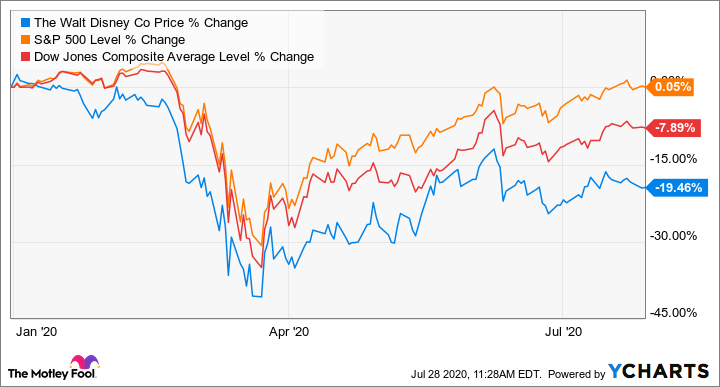 This should provide shareholders with some protection from more general continued economic uncertainty.

Though Disney's business has been hit hard by effects from the pandemic on several levels, the underlying businesses remain solid. The company has been conservative given the many uncertainties, and announced in May 2020 that it will skip its semi-annual dividend, saving it $1.6 billion. It also raised $11 billion through debt sales at low interest rates, even though it announced that it generated $2.2 billion in free cash flow for the first six months of its fiscal year, ending March 28, 2020.

Clearly, financial results will get worse as it reports the April through June fiscal quarter hardest hit by the pandemic. But investors looking for some ballast in a portfolio that could prove to endure more volatility going forward could find somewhat of a savior with Disney.