After the broader equities market experienced a steep decline from late February until mid-March, many stocks have rebounded strongly. The S&P 500 Index fell by nearly 35%, but it is now close to the level seen in the early part of this year.

This surprising rally has made it challenging to find stocks that are selling at discounted valuations. However, it's not an impossible task. There are at least two companies I've found that are selling well below where they were trading just a few months ago and still offer some compelling long-term potential for investors. Let's take a closer look at them. 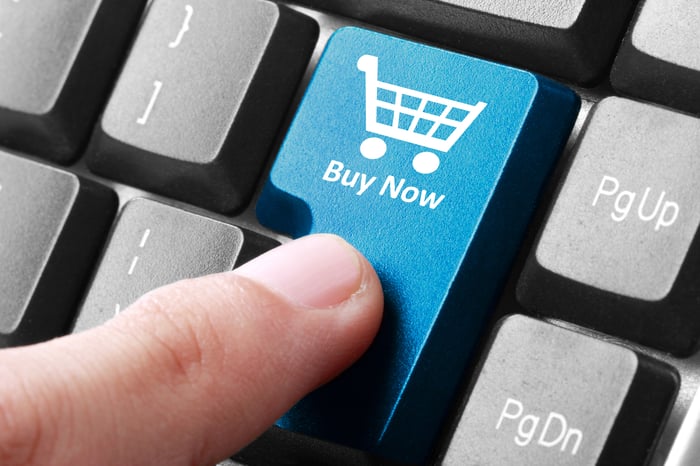 Levi Strauss & Co.'s (LEVI 0.19%) share price is off roughly 40% since February when it was trading around $20. Certainly, it had a rough fiscal second quarter (which covered the three-month period that ended May 24) as many of the retailers it works with were shut down as part of efforts to slow the coronavirus pandemic. Based on generally accepted accounting principles (GAAP), revenue for the company fell by 62% year over year to $498 million while it lost $364 million for the quarter compared to a $29 million profit during last year's Q2. The uncertainty created by the pandemic caused the company to suspend its third-quarter dividend, and it will assess conditions to see if it will resume the payout in the fourth quarter.

The weak quarterly results and dropped dividend payment are not easy pills for investors to swallow. The good news is that these were mostly temporary disruptions to Levi's business. By the start of July, 90% of its retail stores had reopened.

Levi's has some things going for it as management works to return the company to revnue and earnings growth. The company sells its Levi's and Dockers products globally, giving it enviable worldwide brand recognition. Revenue went from $4.5 billion in fiscal 2015 to $5.8 billion last year. Over the same period, its operating income rose from about $455 million to $567 million.

With the company's strong brands and its focus on strengthening its digital capabilities (e-commerce was 15% of its second-quarter revenue compared to 5% last year), Levi's stock price likely won't stay depressed for long.

WW International's (WW -2.35%) share price is roughly 30% lower than where it was trading five months ago. But the fundamental story remains sound. If anything, the weight loss and fitness company's appeal has grown in that time. COVID-19 hurt its first-quarter results as it shut down fitness studios and in-person meetings with weight consultants. However, I expect the company to benefit from people turning to healthier lifestyles since the coronavirus has forced many of us to stay at home. WW International's subscribers grew to 5 million, up 9% from a year ago. After stripping out foreign currency translations, revenue grew by 11% to $400 million.

Nonetheless, unlike many other companies in the industry that come and go, WW International (formerly Weight Watchers) has been around for more than five decades. It has been introducing more digital products that incorporate a healthy lifestyle rather than just focusing on weight loss, and COVID-19 is accelerating the company's transition. This will also help the company attract younger customers.

To top it off, in addition to a healthy lifestyle approach, which never goes out of style, WW International also has the backing of Oprah Winfrey. Besides owning a large chunk of stock and sitting on the board of directors, she was actively promoting the brand with her "WW Presents: Oprah's 2020 Vision" tour, which is now a free online series.

Of course, a stock selling lower than where it was a few months ago does not necessarily translate into a buying opportunity. However, Levi Strauss and WW International's fundamentals remain sound, making these two companies compelling opportunities.