Please ensure Javascript is enabled for purposes of website accessibility
Log In Help Join The Motley Fool
Free Article Join Over 1 Million Premium Members And Get More In-Depth Stock Guidance and Research
By Lawrence Rothman, CFA – May 28, 2020 at 8:03AM

Its broad wellness approach keeps the company ahead of the competition.

WW International (WW 7.16%) traces its roots back nearly six decades, and for much of that time, it was known as Weight Watchers, a name that still resonates with people. Since the weight loss industry has always had fad diets and fly-by-night operators, this staying power is impressive.

With people forced to stay home these days, many are dealing with weight gain and unhealthy habits. WW International's strong brand recognition and focus on a person's well-being make it a natural choice for consumers looking for that extra push in the right direction.

Oprah Winfrey feels so strongly about the company that she has a significant ownership stake and sits on the board. She also embarked on a tour, WW Presents: Oprah's 2020 Vision, which is now a free online seminar that promotes the wellness vision. 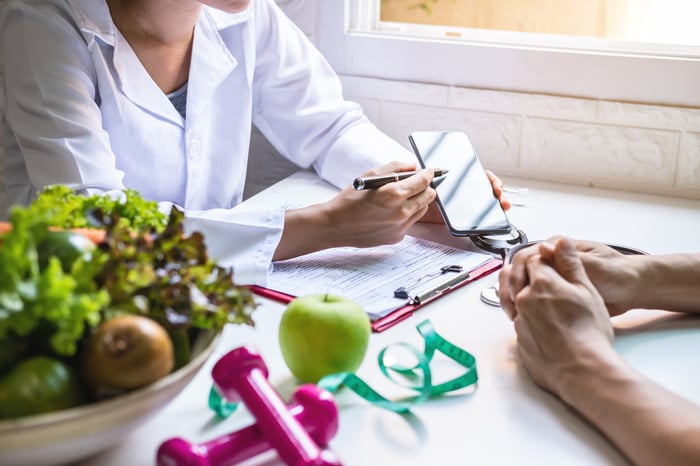 Staying a step ahead

A few years ago, WW International broadened its focus from just weight loss to an individual's overall health. Why is this important? Other companies concentrate on helping people lose weight, but WW's approach allows the company to attract and retain members for a long time since the emphasis is on maintaining a healthy lifestyle, with weight control only a part of the broader program.

There are a lot of diet and fitness companies, but WW International's offerings stand apart. One competitor, Jenny Craig, has been pushing a new program that encourages rapid initial weight loss, and it sells users its own food. Another company, Noom, does take a broader wellness approach, but its subscription service costs $59 per month (with an annual plan coming in at $199). WW International's all-digital offering costs $21 per month, although there are promotions for those who sign up for a longer period. There is also a $55 monthly plan if you want access to a coach.

The company has been pushing digital products as part of its holistic wellness strategy. The web-based and app programs allow you to track your points easily (a core concept is assigning point values for different foods), keep tabs on your exercise using different trackers, and connect to others (e.g., share recipes).

This has helped drive overall subscriber growth, which increased to five million in the first quarter, a year-over-year gain of 9%. More than 70% of those are purely digital subscriptions. Revenue rose 10% to $400.4 million, and adjusted operating income increased 30% year over year to $28.5 million.

Headwinds from the pandemic also forced the company to implement a $100 million cost-savings initiative. This has resulted in eliminating positions as physical meeting spaces become less important to maintaining an online community. Though management took these steps to address the current environment, they should also allow WW International's profit to expand down the road as the business recovers.

WW stock remains down over 40% from its year-to-date high mark despite more than doubling in the past two months.

The company does have a fair amount of debt -- $1.7 billion at the end of the first quarter. A smaller debt burden is better during an economic downturn, but this is not your typical consumer-discretionary company. I expect people to continue turning to its programs to look and feel better. The company has evolved as it has provided a successful approach with long-lasting benefits. To me, that is a winning formula.