Streaming service Netflix (NASDAQ:NFLX) has experienced huge growth over the last six months, as the coronavirus pandemic has kept more and more people at home. However, rival Disney (NYSE:DIS) has also benefited from this surge in streaming subscribers. As more choices pop up and potential subscribers are lured into signing up, has first-mover Netflix peaked in its growth? Not by a long shot. 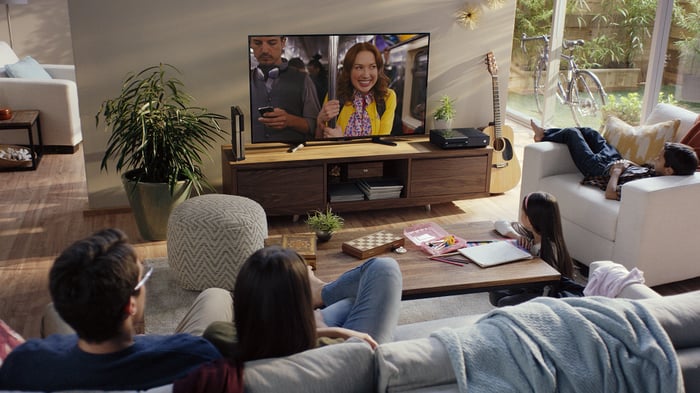 Netflix was one of the first companies to offer on-demand, streaming content, and its strong market position is evident in its numbers. The company has years of consistent revenue growth under its belt, expanding from $6.78 billion in annual revenue in 2015 to $20.15 billion by 2019. The company has also kept a lid on its operating expenses, slowly growing its operating margin from 5% to 13% over the same period. Most impressively, Netflix has increased its net income even more dramatically over that period, growing from $122 million in 2015 to $1.86 billion last year.

However, Disney launched its own direct-to-consumer service last November, and by May 2020, Disney estimated it had gained 54.5 million total subscribers. Netflix, on the other hand, added 25.86 million subscribers in the first half of 2020 to reach a total of 193 million paid global subscribers. Disney+ is currently available in fewer countries than Netflix, leaving it with a very large potential market for expansion, whereas Netflix may be approaching saturation in some of its most penetrated markets. In terms of growth rate, Disney+ is winning the race.

Disney offers a combined streaming package that includes Disney+, ESPN+, and ad-based Hulu, which at $12.99 a month has reeled in many subscribers. After all, the thought of a three-for-one package is hard to pass up -- especially when the standard Netflix plan costs the exact same amount. In fact, ESPN+ is the fastest-growing segment in Disney's streaming package, with 259% year-over-year growth in 2020. Combining the three services creates a synergistic effect, as targeted viewers for one service might often have family who would be interested in other parts of the streaming package. In comparison, Netflix primarily streams licensed and self-produced movies and TV shows, with no indications that it plans to enter live sports or other content segments.

It might seem worrisome for Netflix when comparing the two services, since Disney+ has a library of popular content on which to capitalize. Disney can add new films to its streaming services without paying expensive licensing fees, and it can make buckets of money at multiple steps of the movie-consumption process. Disney owns the Marvel Cinematic Universe, Star Wars, Pixar, and National Geographic. Its new productions include Artemis Fowl, Hamilton, and a movie revival of its popular TV show Phineas and Ferb. Additionally, Disney's $71.3 billion purchase of 21st Century Fox has widened its offerings to include Avatar, The Sound of Music, and The Simpsons. So how in the world can Netflix compete? 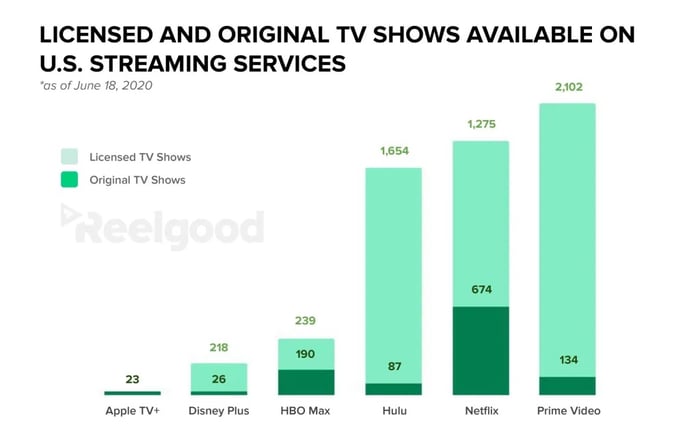 Indeed, over the past half-year alone, we can see Netflix shifting a greater portion of its content toward original productions. In that period, Netflix added $100 million worth of content in its pre-production and in-development stage, while the value of its licensed content decreased by $70.6 million. Ultimately, the company aims to offer original programming for 50% of its total content.

Netflix can further sharpen its competitive edge by capitalizing on its hit adult series, like The Witcher and Unsolved Mysteries. Disney has enjoyed tremendous success with its hit Star Wars show The Mandalorian, but a March 2020 study conducted by video-tracking app Reelgood notes that subscribers still spend three times more time bingeing on Netflix than on Disney+. Furthermore, in a recent survey, only 3% of Netflix subscribers intended to cancel their Netflix subscription for Disney+. So while Disney has a good content library carried by its major franchises, Netflix content still appears to be king. 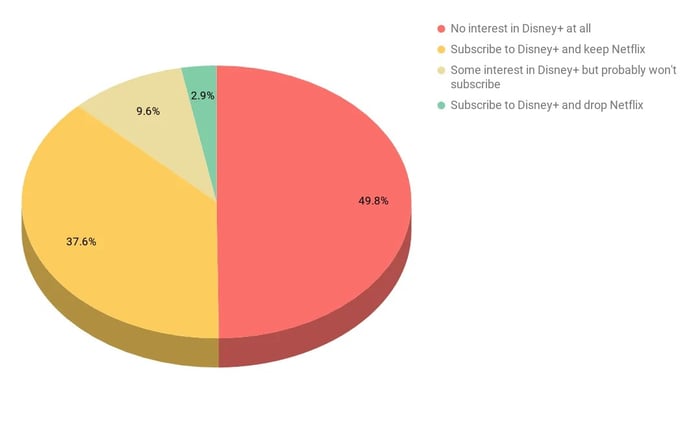 Nevertheless, Netflix is spending large amounts of cash every quarter in order to maintain its first-mover advantage. The second quarter of 2020 saw its free cash flow profile improve as operating margins increased and the pandemic forced the company to pause production. But future free cash flow should dip back down once production starts up again.

At the moment, Netflix spends an increasing amount of cash on producing original content versus how much it expenses over time for licensed titles. The up-front cost for produced content is higher than paying a licensing agreement, but in the long run, Netflix expects that original content will ultimately cost less. Just as Disney benefits from not having to pay third-party fees, Netflix also banks on saving these extra costs to justify its cash-intensive, long-field strategy. Not only does the company potentially save in renegotiating licensing rights every couple of years, but by producing its own originals, Netflix can also capitalize on its content for years to come. It owns the rights to the content globally, as well as the intellectual property, which Netflix can later license for merchandising as future sources of revenue.

Management aims to spend enough early on to capture enough market that, as the company matures, rising revenue will allow it to reach a sustainably positive cash flow. And for the slower times, it has access to a strong credit line.

Netflix has been consistently increasing its net income, despite the debt load, and it maintains a healthy operating margin every quarter. The company also has a current price-to-earnings (P/E) ratio of 82.53, lower than it has been for most of the past five years. Taking into account Netflix's strong growth fundamentals, and heavy investment in original content, this key member of the FAANG stocks seems to have significant room to grow even more in the future.