Please ensure Javascript is enabled for purposes of website accessibility
Log In Help Join The Motley Fool
Free Article Join Over 1 Million Premium Members And Get More In-Depth Stock Guidance and Research
By Keith Speights – Aug 2, 2020 at 9:07AM

Every battlefront in the fight against COVID-19 is important. Novavax (NVAX -10.14%) is focused on developing a vaccine candidate that could potentially prevent infection by the novel coronavirus. Quidel (QDEL) makes COVID-19 diagnostics tests.

So far in 2020, Novavax has delivered more impressive gains. Its shares have skyrocketed over 3,500% compared to Quidel's solid gain of close to 277%. Which of these two coronavirus stocks is the better pick now? Here's how Novavax and Quidel compare. 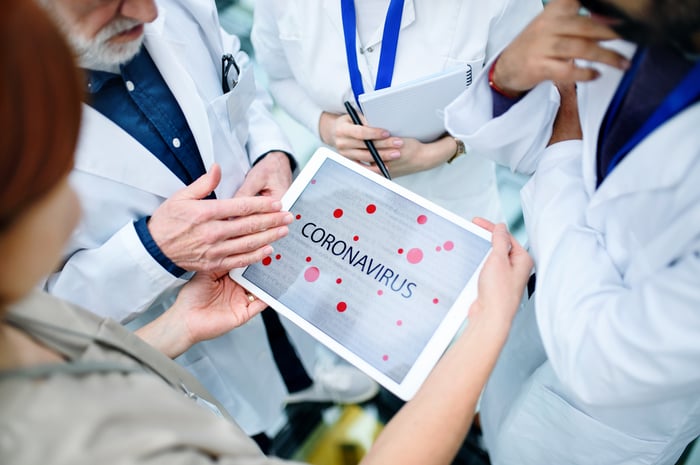 Novavax was viewed as a dark-horse candidate when the biotech first announced plans to develop an experimental COVID-19 vaccine earlier this year. Now, though, the company is a legitimate contender in the coronavirus vaccine race.

The clearest sign of just how serious of a contender Novavax might be came on July 7. That's when Operation Warp Speed, the U.S. government initiative to accelerate the development of COVID-19 vaccines, awarded $1.6 billion to Novavax. The money is targeted for the late-stage clinical testing of Novavax's COVID-19 vaccine candidate NVX-CoV2373 and for the production of 100 million doses of the experimental vaccine.

Novavax plans to announce the results from the phase 1 portion of a phase 1/2 clinical study of NVX-CoV2373 this week. The phase 2 part of the study is expected to begin soon afterward. Novavax hopes to initiate a pivotal phase 3 study in the fall of 2020.

The next step for Novavax with regards to NanoFlu is to file for approval. If NanoFlu wins approval (as seems likely), it could generate peak sales of over $1 billion.

Quidel hit the ground running in March after receiving FDA Emergency Use Authorization (EUA) for its Lyra real-time reverse-transcriptase polymerase chain reaction (RT-PCR) test for detecting SARS-CoV-2, the virus that causes COVID-19. But that was just the tip of the iceberg.

In May, Quidel won an EUA for its Sofia 2 SARS Antigen FIA rapid point-of-care COVID-19 antigen diagnostic test. The test was built to run on the company's Sofia 2 next-generation immunoassay system. A month later, Quidel received an EUA for running the antigen test on its first-generation Sofia system.

The company announced in July that the U.S. Department of Health and Human Services plans to buy 2,000 Sofia 2 instruments and 750,000 Sofia SARS Antigen FIA over the next few months for use in nursing homes. Quidel also reported that it obtained a CE Mark for the antigen test, paving the way for marketing it in Europe and other countries that accept the CE Mark.

Demand for Quidel's systems and tests were even stronger than expected in the second quarter of 2020. In June alone, the company shipped around 1,500 Sofia instruments.

Quidel's COVID-19 boom overshadows the fact that the company was already successful before the coronavirus outbreak earlier this year. In 2019, Quidel generated revenue of nearly $535 million. Cardiac immunoassay sales contributed roughly half of that total. The company also posted a profit of nearly $73 million.

Despite its big gain so far in 2020, Quidel's valuation isn't scary at all. Its shares trade at a little over 20 times expected earnings.

I like Novavax's prospects. My view is that NanoFlu will win FDA approval and become a blockbuster over time. I'm not as confident about the chances for Novavax's COVID-19 vaccine candidate. But if it is successful, the biotech stock will have a lot more room to run than Quidel has.

However, I think that Quidel is the safer pick. It has plenty of revenue coming in the door. It's profitable. The COVID-19 outbreak should fuel demand at least through 2021.

If you're a more aggressive investor, Novavax could be more up your alley. But if you prefer to buy stocks of companies that are making money, Quidel is the better fit.