Please ensure Javascript is enabled for purposes of website accessibility
Log In Help Join The Motley Fool
Free Article Join Over 1 Million Premium Members And Get More In-Depth Stock Guidance and Research
By Leo Sun – Aug 2, 2020 at 7:00AM

Shares of Intuit (INTU 0.41%), the financial software company that produces TurboTax, Mint, and QuickBooks, rallied more than 660% over the past 10 years and outpaced the Nasdaq Composite's gain of nearly 370%. During that decade, Intuit divested its older and weaker units, restructured its business to cut costs, and expanded into personal finance software, cloud-based analytics, and payroll services via acquisitions.

Intuit and its smaller rival H&R Block (HRB 2.65%) also repeatedly lobbied against the IRS' development of free online tax services, but eventually agreed to provide free filing services for lower-income households. Does that compromise, along with the COVID-19 crisis, suggest Intuit's growth will decelerate in the future? Let's take a fresh look at the online tax prep company to find out. 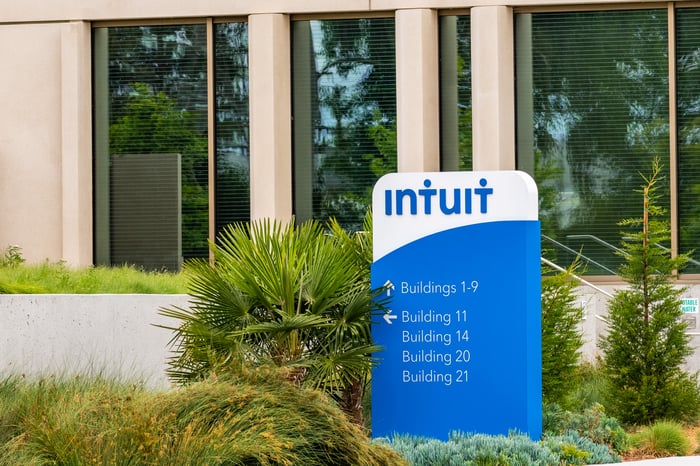 How fast is Intuit growing?

Its number of QBO subscribers rose 33% to 4.5 million, and TTO claimed over two-thirds of the online tax preparation market last year, according to ProPublica. Credit Karma, which Intuit agreed to buy earlier this year, accounts for another 3% of the market. H&R Block, which ranks a distant second, controlled less than 15% of the market. 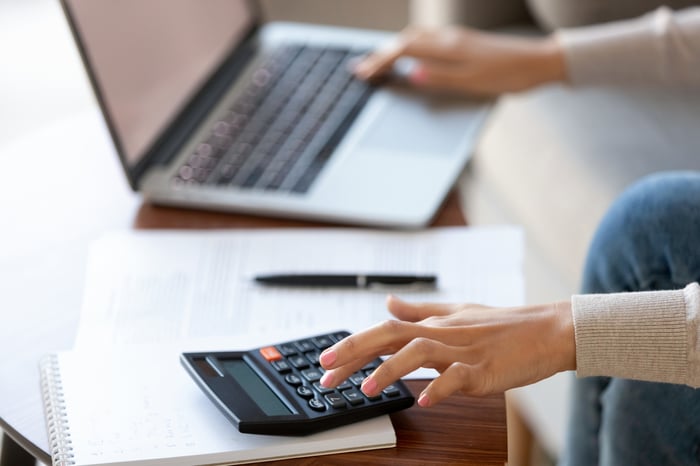 Intuit's two main business segments, its Small Business and Self-Employed Group and Consumer and Strategic Partner Group, both generated double-digit revenue growth for the full year. It bought back $561 million in shares, and its adjusted earnings rose 17%.

At the time, Intuit expected its revenue to rise 10% to 11% in fiscal 2020, and for its adjusted EPS to grow 11% to 13%. However, the COVID-19 crisis -- which shut down businesses and delayed the tax deadline by three months -- forced Intuit to withdraw its full-year guidance in May.

In the first nine months of fiscal 2020, Intuit's revenue rose just 1% to $5.9 billion, while its adjusted EPS declined 11%. It blamed those declines primarily on the delayed tax deadline, which shifted the filing date (July 15) into its fourth quarter, and business closures throughout the crisis.

Intuit didn't offer much insight into its fourth quarter, but analysts expect its revenue to rise 58% annually as it starts processing tax returns and businesses reopen. Analysts also expect that fourth-quarter boost to lift Intuit's full-year revenue and earnings 9% and 5%, respectively -- which would still fall short of its previous estimates but would suggest its core business is stabilizing.

What are the main tailwinds and headwinds?

During the most recent quarter's conference call, Intuit CEO Sasan Goodarzi noted that even though the company had "limited" near-term visibility, it remained "more inspired than ever" to achieve the "prosperity, reputation, and growth" goals it set for 2025 during its Investor Day presentation last October.

In terms of prosperity, Intuit believes it can double the household savings rate and improve the success rate of small businesses by 10 points against the overall industry. In terms of reputation, it plans to remain listed as a "best in class" company on Forbes' annual Most Reputable Companies list. In terms of growth, it believes it can eventually serve over 200 million customers across all its products and generate accelerating revenue growth again.

Those goals are admittedly vague, but three tailwinds support Intuit's long-term growth: its market-share dominance, which gives it pricing power against H&R Block and other rivals; its takeover of Credit Karma, which complements Mint and bridges the gap between personal finance and free tax prep tools; and the development of new artificial intelligence (AI) tools, which streamline its services.

But there are also headwinds on the horizon. A second wave of COVID-19 infections and closures could curb its growth, and new probes into Intuit and H&R Block's alleged obfuscation of free filing services for eligible households could spark fines and new regulations against both companies.

Does its growth justify its valuation?

Intuit will likely generate stable revenue and earnings growth for years to come. But at 36 times forward earnings, the stock isn't cheap relative to its near-term earnings growth, and its 0.7% yield won't attract any income investors.

The bulls might believe Intuit's premium is justified by its stability and dominance of an evergreen market. However, the bears will note Intuit is still highly dependent on small to medium-sized businesses -- which could still be hit by a second wave of COVID-19 closures and a deep recession.

Therefore, I'd stay away from Intuit for now. Investors looking for defensive growth in this volatile market should consider some higher-growth cloud players instead of an online financial services company that remains heavily exposed to macro headwinds.