Shares of electric delivery-van maker Workhorse Group (NASDAQ:WKHS) were trading higher on Monday. The company holds a roughly 10% stake in electric-pickup start-up Lordstown Motors, which revealed plans to go public via a reverse merger with DiamondPeak Holdings (NASDAQ:DPHC) before the markets opened on Monday.

Sometimes it's hard to tell exactly what is pushing a stock's price higher. Not today: The deal to take Lordstown Motors public will dramatically increase the value of Workhorse's stake in Lordstown and (in time) give it a cash flow from royalties. Obviously, that's very good news for the company.

Lordstown and Workhorse are closely related. Lordstown CEO Steve Burns is Workhorse's former CEO, and Lordstown licensed some designs and patents from Workhorse. In return, Workhorse received a 9.99% stake in Lordstown, along with -- significantly -- an agreement that protects that stake from dilution for two years.

The Lordstown-DiamondPeak merger deal assigns a pro forma value of $1.6 billion to the combined company, meaning that Workhorse's stake is now valued at about $160 million.

But there's more. The agreement also entitles Workhorse to a 1% fee on any debt or equity raised to fund Lordstown during that two-year period, and -- again, significantly -- gives it a royalty on each truck Lordstown sells.

See what I mean? It's not hard to figure out why Workhorse's shares are higher today. 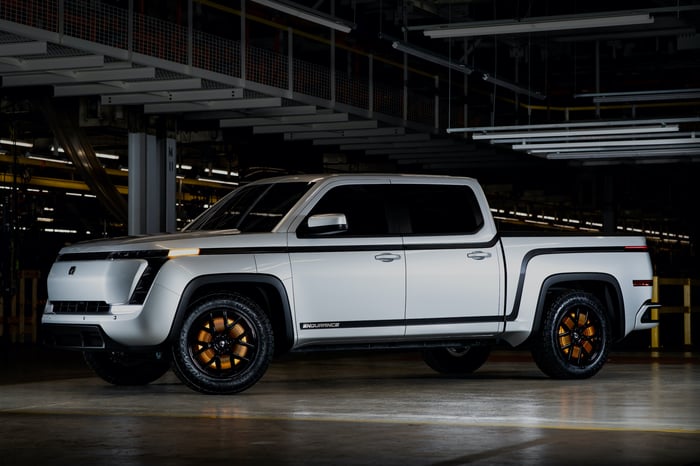 Workhorse will get a royalty on every Lordstown Endurance pickup sold. Image source: Lordstown Motors.

Roth Capital analyst Craig Irwin has followed Workhorse and Lordstown closely. In a new note on Monday, he estimated that the cash value of the merger and a successful launch of Lordstown's Endurance pickup will be worth over $100 million in royalties and fees to Workhorse.

Irwin has a buy rating and price target of $27 on Workhorse's shares. While that target seems reasonable in light of the intense investor interest in electric-vehicle start-ups right now, auto investors should keep in mind that Workhorse and Lordstown are companies with very little revenue between them.

That said, both have competitive products that are targeted to win potentially lucrative business from commercial fleets seeking zero-emission vehicles, a segment that is likely to see strong growth whether or not U.S. consumers embrace electric cars over the next few years.