Please ensure Javascript is enabled for purposes of website accessibility
Log In Help Join The Motley Fool
Free Article Join Over 1 Million Premium Members And Get More In-Depth Stock Guidance and Research
By Keith Noonan – Aug 4, 2020 at 6:43AM

These industry leaders have what it takes to deliver fantastic returns.

After seven full months of trading and record levels of volatility across the stretch, the S&P 500 Index (^GSPC -0.17%) is now roughly flat across 2020. 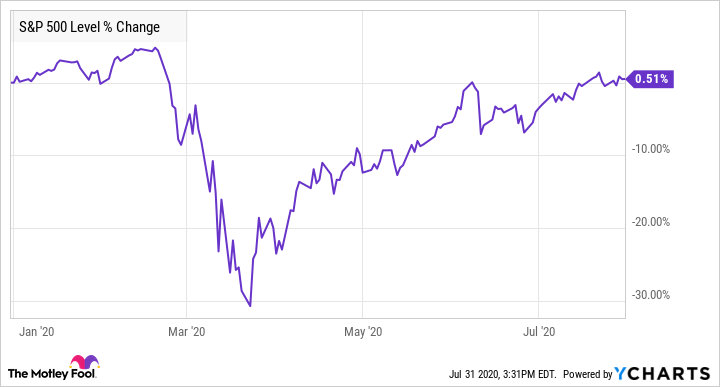 No one knows for certain what twists and turns the rest of the year might hold, but companies that can shape influential trends in business and everyday life will continue delivering strong returns for investors over the long term. Here's why CrowdStrike Holdings (CRWD -16.98%), Impinj (PI 0.10%), and Match Group (MTCH 1.07%) fit that bill and stand out as top stocks to buy this month. CrowdStrike provides cloud-based software for monitoring and preventing security breaches on computers, mobile devices, and servers. These protections help to ensure that bad actors can't gain access to networks to steal or corrupt valuable data. Demand for the company's services was already soaring before the coronavirus pandemic shook up the business world, and device-level protection has only become more important as businesses, schools, and other institutions have turned to telecommuting to conduct their operations.

CrowdStrike nearly doubled its market share in 2019, according to research from market intelligence firm IDC, and its strong momentum has continued this year. The cybersecurity specialist's annualized recurring revenue rose 88% year over year last quarter, and its subscription customer count climbed 105% over the prior-year period.

CrowdStrike is trading at roughly 31.5 times this year's expected sales, a valuation that might look intimidating at first glance. But the company is growing its business at a breakneck clip, and it should be able to shift into substantial profitability when it eases off spending to drive growth.

The business is already cash flow positive despite big investments in technology and customer acquisition. Gross profit roughly doubled last quarter, and the company's adjusted gross margin rose to 78%, up from 73% in the prior-year quarter.

With a boom in the number of connected devices set to take place over the next decade and rising threats from cyberattacks, CrowdStrike looks primed for big growth.

Impinj: Buy the dip on this Internet of Things innovator

With a market capitalization of just $520 million and a strong position in a niche product category that could see exploding demand, Impinj has serious multibagger potential. Its stock has slumped after the company posted underwhelming second-quarter results on July 29, and it's now in negative territory on the year. But investors shouldn't let near-term setbacks turn them away from this potentially explosive stock. 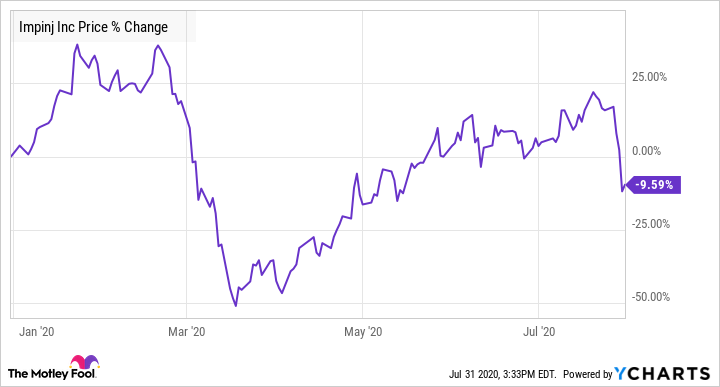 Impinj specializes in radio-frequency identification (RFID) tags and sensors. Its tags can function without a power source and be fitted to packages, clothing and apparel, luggage, auto parts, and other objects that companies want to bridge into the world of network connectivity. Information transmitted from RFID tags can be used by businesses to track and analyze inventory, optimize supply chains, identify potential safety issues, and reduce the incidence of theft and counterfeiting.

Widespread closures for retail stores meant weakened demand for the company's products last quarter, but the subsequent sell-off has presented a worthwhile entry point for investors willing to weather short-term headwinds in pursuit of big gains down the line. Impinj stock is now off 40% from its 52-week high, but there's a good chance the company can move through its current challenges and go on to reach new heights.

The retail market should bounce back as pressures from the coronavirus recede, and Impinj has plenty of room for growth in conjunction with the evolution of Internet of Things technologies.The market for the company's RFID products is still very young, and new applications and rising demand for the tech will likely emerge in the coming years.

Match Group: There's a lot to love about this online dating leader

Online dating has never been more popular, and it's almost certain that connections made through apps and websites will continue to make up a growing share of new romantic relationships. Match Group is the U.S.'s leading provider of online-dating services, and it's in great position to benefit as dating increasingly goes digital.

The company primarily generates revenue from selling subscriptions for enhanced app features to users, and its catalog of romance-focused platforms includes Tinder, Plenty of Fish, Match.com, Hinge, and OKCupid, among others. Tinder is by far the company's most profitable application and boasts more paid subscribers than any other dating app in the U.S., but the benefits of having a variety of leading offerings in the dating category shouldn't be underappreciated.

If users tire of Tinder and move on to other online dating services, there's a good chance they will still wind up being active on another platform in Match's ecosystem. The company's industry-dominating position means it has more active users than any competitor in the space, and its apps dominate the list of most-used online dating services.

Larger active user bases tend to mean better experiences for members, as a greater number of potential romantic partners on a given app should increase the chances of finding someone you click with. Match has a big advantage here, and thus far, even resource-rich competitors like Facebook haven't been able to bridge the company's moat.

Match will publish its second-quarter earnings and host a conference call on the results before the market opens on Aug. 5. The company has a market capitalization of roughly $26.5 billion and trades at roughly 49 times this year's expected earnings. That valuation might look a bit lofty, but Match should emerge from near-term headwinds created by COVID-19, and the business has plenty of room for long-term growth as it introduces new features, makes additional acquisitions, and expands its user base.