Last Thursday, Facebook (NASDAQ:FB), Apple, and Amazon all delivered blowout second-quarter earnings reports, speeding past estimates. Alphabet (NASDAQ:GOOG) (NASDAQ:GOOGL) was the odd tech titan out, however, sliding 3% the next day as its peers soared.

Alphabet was the only one of the bunch to post declining revenue, which dropped 2%, while sales in its core search business fell 10%. On the bottom line, earnings per share dipped from $14.21 in the quarter a year ago to $10.13.

Advertising has been weak across the board as marketers have pulled back on spending during the lockdown period, and have only gradually increased ad budgets as the economy has reopened. However, Facebook, Google's closest rival, fared much better in the second quarter, with revenue increasing 11% on 10% growth in its core advertising business.

Facebook is smaller than Google, but is fast gaining on its top rival, and nearly passed Alphabet in operating income in the most recent quarter -- the social media titan posted an operating profit of $6 billion, compared to $6.4 billion in operating profit at Alphabet. Though last quarter was something of an anomaly, Facebook has been outgrowing Alphabet for several years, and could soon top it in profits. Let's take a look at how Facebook is speeding past its top competitor. 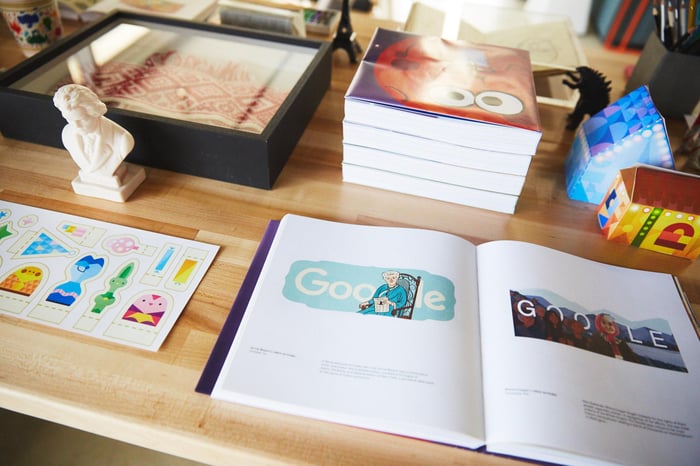 Google saw its revenue steadily recover over the course of the quarter, but the company was impacted by the loss of advertisers in areas like travel. Online travel agencies like Booking Holdings and Expedia normally spend billions on Google ads ever year, but essentially shut down their marketing spending as travel demand collapsed. They also seem to be rethinking that marketing strategy even after the pandemic ends, as Expedia CEO Peter Kern said the crisis presented an "opportunity of an entire reset" for the company's ad budget, especially as Google has become one of its biggest competitors. Analysts estimated that travel made up 11% of Google's search revenue last year, making it a key market. Advertisers like Amazon have also pulled ad spending off of Google.

On the recent earnings call, Alphabet CFO Ruth Porat said the ad business was closely tied to the global macroeconomic environment, implying that the business would recover as the economy did.

Facebook is also sensitive to the macro economy. Growth slowed from a year ago, but the company's strength with small businesses gives it an edge over Google. Facebook Management said on the earnings call that its top 100 advertisers accounted for just 16% of revenue in the second quarter, and it's seen a surge in small businesses on its platform, which see it as a lifeline to reach customers, and now has 9 million total advertisers. While the company has faced other challenges, including the boycott, its strength with small businesses gives it a ballast against macroeconomic weakness, especially in areas like travel.

2. "Other bets" is turning into a money pit

Alphabet again posted an operating loss of more than $1 billion from its "other bets" division, the group of non-Google businesses like Waymo, the self-driving unit, that the company refers to as moonshots. These are high risk/reward ideas that the company is investing its profits from Google into, but five years into the plan it's mostly been a disappointment. While Waymo recently raised money at a valuation of $30 billion, that's down from estimates of as high as $175 billion in 2018. Meanwhile, Google Fiber, its broadband business contained within Access, has essentially stopped expanding after earlier showing promising potential.

Facebook, by contrast, has growth initiatives in areas like Oculus, Portal, payments, e-commerce, and with new products and features in its four major apps, Facebook, Instagram, WhatsApp, and Messenger -- and its investments seem to better fit in with its core mission of connecting people.

Google, on the other hand, has done little to change the user experience in its core search function, and its moonshots and other new businesses seem divorced from the company's mission of organizing the world's information. It's easy to see how apps like search and maps fulfill that objective, but businesses like Waymo, Google Cloud, and hardware such as the Chromecast seem to have little to do with organizing information. They're more an expression of a company anxious to jump on the next emerging technology rather than staying within its core competencies and competitive advantages. That doesn't mean that those other businesses can't be successful, but they don't leverage Google's competitive advantages or core assets. Its strength in search, for example doesn't make it better at autonomous vehicle technology.

That's not true with Facebook. At the social media company, its businesses, both established and new products, reinforce each other, creating an ecosystem that benefits end users and advertisers and gives new businesses like Facebook Shops a greater chance at being successful.

That ultimately makes Facebook a stronger overall business than Alphabet, and should help it eventually outgrow its rival. Don't be surprised if Facebook tops Alphabet's profits in the next year or two.