Please ensure Javascript is enabled for purposes of website accessibility
Log In Help Join The Motley Fool
Free Article
Join Nearly 1 Million Premium Members And Get More In-Depth Stock Guidance and Research
By Will Healy – Aug 5, 2020 at 7:23AM

The future appears bright, but the stock is quickly surging toward all-time highs.

Pinterest (PINS -0.27%) surged 36% in Friday's trading as the company beat both revenue and earnings estimates. Heightened interest in the platform and growth outside of the United States got the market's attention.

However, the higher stock price also forces investors to reevaluate the company. Should they start building their positions in Pinterest stock or wait for a pullback? Let's examine the company's financials and its business to see whether it remains a buy for new investors.

Pinterest showed resilience in the face of some major headwinds. Revenue of $272.5 million came in only 4% higher year over year. However, that top line figure easily topped the analysts' consensus of approximately $255 million.

But it was likely the increase in international revenue, which rose by 72%, that drove the stock's surge. Investors also cheered the global monthly active user (MAUs) growth of 39% with international markets up 49%.

What these numbers mean for investors

The recent rally is welcome news after Pinterest launched its IPO in April 2019 at $19 per share. After initially rising to almost $37 per share last year, the stock fell to a low of just $10 in March during the coronavirus sell-off. Now, shares have moved to $35 per share as of this writing, approaching their previous all-time high. 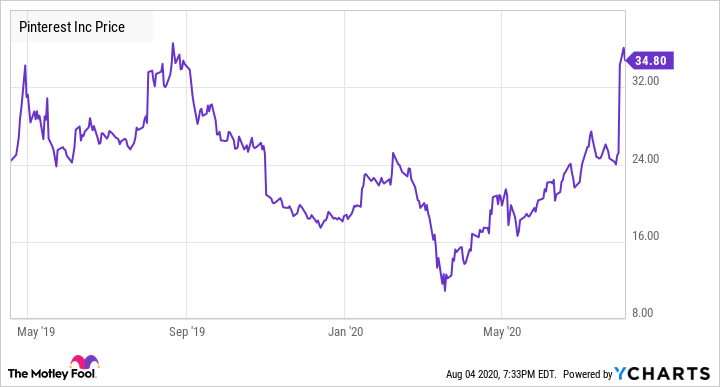 Pinterest's results are strong given the 32.9% contraction in U.S. gross domestic product during the second quarter and the broader decline in ad spending. However, since the company does depend on ads for revenue, the broad market downturn negated most of the benefits from its growing user base.

For example, in the United States, a 13% increase in MAUs still led to a 2% drop in revenue. Moreover, despite the spike in international MAU growth, non-U.S. revenue only accounts for 15% of the top line.

Interestingly, the downturn may have helped the stock. In the earnings release, CEO Ben Silbermann noted, "In these tough times, we’re seeing more and more people rely on Pinterest to cook at home, plan kids activities and set up a home office. Businesses are helping them turn their ideas into reality as people are increasingly discovering and buying products on Pinterest."

Hence, given the rising case numbers for COVID-19, the increased MAU growth should persist near term. 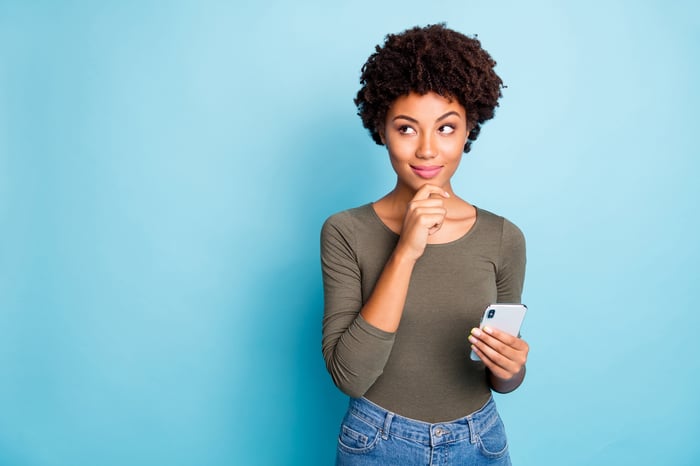 First, Pinterest dominates a special niche in social media where competing platforms have yet to gain steam, even for massive competitors such as Facebook. Also, thanks to the recent quarterly growth, the large base of 416 million MAUs results in powerful network effects for Pinterest.

The stock trades at a price-to-sales (P/S) ratio of 16.7. That comes in higher than its larger peers, but growth comes more easily to smaller platforms like Pinterest, which has a market cap of just $20 billion. Management reported approximately 50% revenue growth for July, and the company is guiding for third-quarter growth in the mid-30% range on a year-over-year basis.

Pinterest has other advantages too. Twitter, which trades at 8.6 times revenue, may be cheaper, but its second-quarter report included a 19% revenue decline and a complete reversal on the bottom line from a $0.05 per share profit last year to a $0.16 per share loss. Twitter also lags behind in revenue durability due to a heavy reliance on brand advertising.

While it may not be a cheap stock, Pinterest's leadership within its corner of the social media world and the bullish outlook for 2020 bode well for the company.