Please ensure Javascript is enabled for purposes of website accessibility
Log In Help Join The Motley Fool
Free Article Join Over 1 Million Premium Members And Get More In-Depth Stock Guidance and Research
By Keith Speights – Updated Aug 6, 2020 at 8:35AM

But the company did provide information in its Q2 update that investors should care about.

Arena Pharmaceuticals (ARNA) has made investors happy campers so far in 2020. Its shares are up more than 40%. The company also reported some good news from its pipeline earlier this year and even enjoyed a boost from positive data for a rival's drug.

But when Arena announced its second-quarter results after the market closed on Wednesday, investors basically yawned. Why? The Q2 results really don't matter. 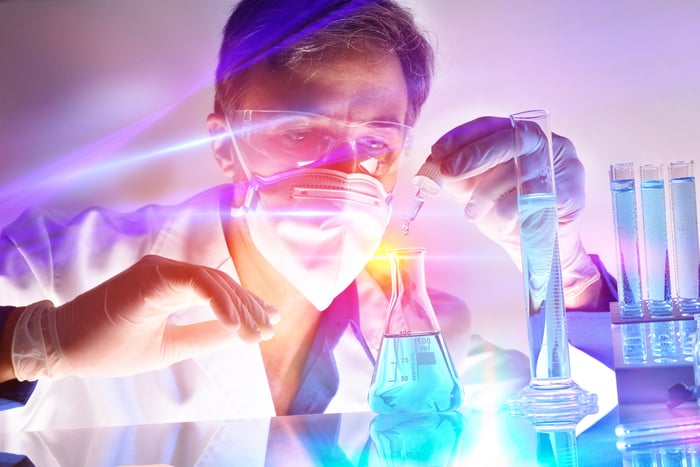 Arena reported second-quarter revenue of... zip, nada, nothing. But the average estimate of the 12 analysts surveyed by Refinitiv was for Q2 revenue of $1.47 million. Should that be concerning? Not at all.

The company also posted a net loss in Q2 of $84.9 million, or $1.61 per share, based on generally accepted accounting principles (GAAP). This was somewhat better than Arena's GAAP net loss of $61.4 million, or $1.24 per share, recorded in the prior-year period. It also wasn't nearly as bad as the consensus analysts' estimate of a net loss of $2.03 per share. Again, though, this bottom-line beat isn't anything to get excited about.

Until Arena has a product on the market, any revenue it makes (or doesn't make) simply isn't going to mean much. And how the drugmaker fares relative to analysts' estimates for either the top or bottom line reveals more about how good the analysts are at projecting than it does about how well Arena is performing.

There was one financial number in Arena's Q2 update that does matter. The company reported that it had cash, cash equivalents, and marketable securities totaling $1.3 billion as of June 30, 2020. This included nearly $302 million in net proceeds from a stock offering in the second quarter.

This cash stockpile puts Arena in a pretty good position to fund its operations for a while. The company expects to use $400 million to $430 million in cash for operating activities in full-year 2020. Since much of this cash has already been used in the first half of the year, Arena's cash should carry it well into 2021 and perhaps beyond.

But what really matters the most for Arena was its pipeline update, even though much of the information provided wasn't new to investors. The company said that its Advise phase 2b clinical study evaluating etrasimod in treating atopic dermatitis has completed enrollment. It expects to report topline results in the fourth quarter of this year.

Another phase 2b study of the investigational drug in treating Crohn's disease is ongoing. Arena plans to report topline data from the study in 2021, although enrollment could be impacted by the COVID-19 pandemic. The coronavirus outbreak could also affect the company's scheduled start later this year of a phase 2b clinical trial evaluating etrasimod in treating chronic inflammatory disease eosinophilic esophagitis and a phase 2 study of the drug candidate in treating sudden hair-loss disorder alopecia areata.

Perhaps the most important news for the biotech stock in its Q2 update was that the Elevate UC 52 phase 3 study of etrasimod in treating ulcerative colitis remains on track. The company also expects to initiate another phase 3 study of the drug in the indication in the second half of 2020. Arena expects to announce topline results for both studies by the end of next year.

The company stated that the COVID-19 pandemic has caused some issues with enrollment in its Captivate phase 2b study of olorinab in treating abdominal pain associated with irritable bowel syndrome. However, Arena still expects to report initial results in early 2021.

Last, but not least, Arena noted that it has resumed its phase 1 study evaluating APD418 in treating acute heart failure. Topline results are expected in the fourth quarter of 2020.