Please ensure Javascript is enabled for purposes of website accessibility
Log In Help Join The Motley Fool
Free Article
Join Nearly 1 Million Premium Members And Get More In-Depth Stock Guidance and Research
By Will Healy – Aug 7, 2020 at 7:45AM

The social media company remains in growth mode, but COVID-19 could still have negative effects on the business.

Facebook (META -4.27%) blew away expectations as it reported its first full quarter of results in the pandemic. The social media giant delivered strong revenue and earnings, sending its stock soaring 8% on the day following the announcement. The earnings beat also took this FAANG stock to fresh all-time highs.

Now, the question for investors is what to do about it. Should they still buy amid a record 33% contraction in U.S. gross domestic product? Moreover, how will antitrust allegations affect the stock going forward?

Despite the blowout quarter, investors still have much to consider before buying this stock. 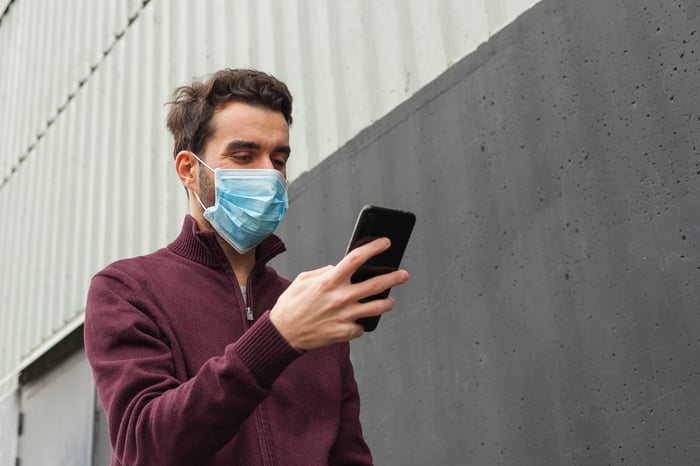 In the second quarter, Facebook reported earnings of $1.80 per share, nearly doubling the $0.91 per share the company recorded in the second quarter of 2019. Also, revenue of just $18.69 billion represented an 11% increase year over year. Chief Operating Officer Sheryl Sandberg reported that revenue was flat in April before staging a recovery in May and June.

Indeed, that revenue growth figure showed that the company has felt some of the effects from COVID-19 as the top line had grown 28% in the year-ago period.

However, due to $3.1 billion in additional expenses related to a legal settlement and taxes, that quarter also saw net income fall almost 50%, heavily skewing the two-fold increase in this latest report. This means that the most recent net income level of $5.18 billion is only a 1.4% increase over the last two years. Hence, profit growth is not quite as high as it appears.

Meanwhile, the number of daily and monthly active users across Facebook's platforms increased 15% and 14%, respectively. Facebook credited the pandemic for these gains, and the company expects engagement to turn flat or fall slightly as lockdown restrictions ease. Ad revenue in the second quarter still managed to grow in the U.S., Canada, Europe, and Asia.

After this latest rally, the stock's forward trailing price-to-earnings ratio now stands at about 32. This has taken the multiple to its highest level in about five years. 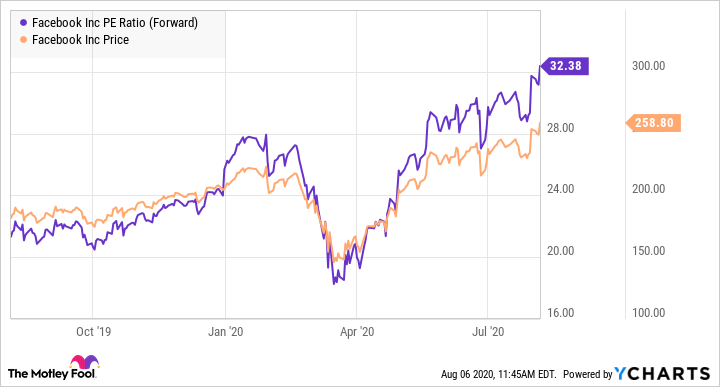 Where the company stands

Facebook remains in a relatively strong position. Amid a pandemic, it has still managed to post positive growth. This in itself is an accomplishment given the state of the economy. Holding more than $58 billion in liquidity also boosts its standing.

However, this success has also led to antitrust scrutiny. Indeed, one can argue Facebook wields monopoly-like power as a primary source of news and information for billions of people, leaving advertisers little choice but to turn to the social media platform when trying to reach a target audience. Regulators have also raised concerns over the company's history of buying out smaller competitors that pose a threat to the social media giant. This is an area of concern that investors should watch closely.

Looking ahead, even with talk of revenue normalization, depressed advertising activity will be a headwind, particularly if COVID-19 persists for a longer period of time. For all of the news about Facebook and its other platforms, ad revenue drives earnings. The increased engagement from the pandemic means little if advertisers overall reduce spending amid a declining economy.

The company provided some guidance for the third quarter, indicating that July's revenue pointed to results comparable to those seen in the second quarter with year-over-year growth of approximately 10% (which should persist for the remainder of the quarter).

Facebook beat expectations, and investors have responded favorably. Indeed, the company appears poised to fare better than most during this downturn. It holds significant liquidity, and analysts expect earnings and revenue growth to bounce back in fiscal 2021. This leaves Facebook stock a long-term buy.

Nonetheless, the economy experienced a record contraction in GDP, and the company's revenue depends heavily on economic activity. In the near term, the impacts of the economic downturn will probably remain a significant headwind. Although Facebook should continue to grow, this is probably the wrong time to pay a premium valuation.