Following strong clinical data from its COVID-19 vaccine, shares of Novavax are trading at record highs.

One of the best-performing biotech stocks so far this year is Novavax (NVAX 0.58%). The company wasn't particularly well-known going into 2020, but its stock price has risen by an astonishing 3,850% this year. Given its status as a promising COVID-19 vaccine developer -- one of many out there -- it's not surprising that the price has shot up so much so fast.

Just recently, Novavax released new clinical data surrounding its promising vaccine candidate, news that sent the stock jumping even further. With the company's prospects looking better than ever, should on-the-fence investors get in on this biotech company before shares rise even more? Let's find out. 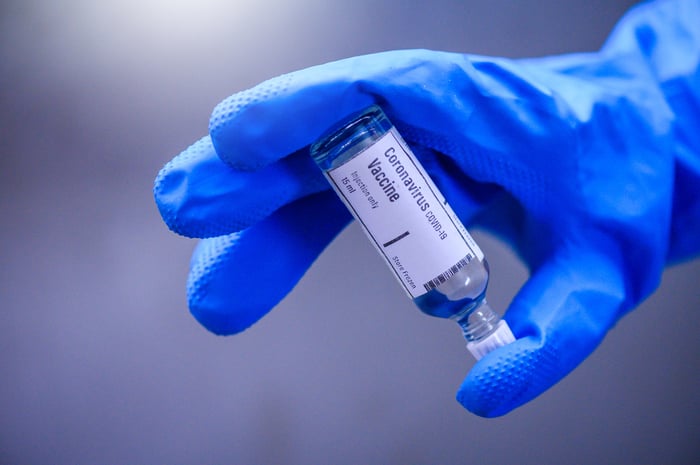 Diving into the results

While its COVID-19 vaccine is still in the early stages of clinical development, positive news from Novavax's phase 1/2 trial was met with a lot of excitement. The trial involved 131 healthy adults, featuring two different dose levels for the company's vaccine candidate, NVX-CoV2373. All patients involved in the trial saw significant increases in neutralizing antibodies compared with patients who had naturally recovered from COVID-19.

As for adverse reactions, they were quite mild across the patients tested. While both the lower dose and the higher dose were well-tolerated by patients, the higher dose did elicit a stronger response in terms of side effects, the worst of which were headaches and fatigue that subsided quickly.

What makes Novavax's approach different from that of the other vaccine makers out there is its unique nanoparticle technology. More specifically, the company has developed a highly effective method to enhance immune response called Matrix-M, which is used as an ingredient, or adjuvant, to make vaccines more powerful.

Although it's easy to get wrapped up in the company's COVID-19 work, Novavax has a highly promising nanoparticle flu vaccine candidate in the works as well: NanoFlu.

Despite initial skepticism, the clinical data so far has been resoundingly positive. Back in March, NanoFlu passed all of its primary and secondary endpoints in a phase 3 trial, while handily outperforming the current leading flu vaccine, Fluzone, which was developed by Sanofi.

While not as newsworthy as the coronavirus, the flu is still a big deal. About 500,000 hospitalizations occurred due to the disease in the U.S. last year, and there were about 34,000 deaths. Considering that the flu vaccine market is expected to reach $6.2 billion by 2026, that's a big opportunity for NanoFlu.

While Novavax's COVID-19 treatment is promising, there are still more than 160 other coronavirus vaccine candidates either in development or undergoing clinical testing right now. To say there's plenty of competition is an understatement. Other companies -- including Moderna, AstraZeneca, and Pfizer -- all have vaccine candidates that are currently in phase 3 of clinical testing.

Many companies have a significant head start on Novavax, which has yet to start its own phase 3 trials for NVX-CoV2373. Even if Novavax's COVID-19 candidate does extremely well in terms of clinical results, if it's not one of the first few vaccines to hit the market, it could make less money for the company than some investors might expect.

Regardless of how well its COVID-19 candidate does, however, Novavax's extremely promising NanoFlu has the potential to be a big seller in and of itself. Some analysts predict that NanoFlu could bring in at least $550 million in yearly sales for the biotech company. That's a big deal for a business whose first-quarter revenue was about $3.4 million.

The way I see it, Novavax has two good chances to hit a financial home run. Both its COVID-19 candidate and its NanoFlu offering have the potential to make a fortune for Novavax, and send the stock soaring. Either way, investors who haven't already added Novavax to their portfolios would do well do to so before the stock rises even further.