Clearway Energy (NYSE:CWEN)(NYSE:CWEN.A) promised to normalize its dividend once one of its largest customers -- California utility Pacific Gas & Electric (NYSE:PCG) -- reemerged from bankruptcy. With PG&E exiting that process last month, Clearway made good on its word by boosting its payout an eye-popping 49%. That pushed its dividend yield up from 3.3% to 4.8%.

The renewable energy company also made it clear that it has plenty of power to continue growing its payout, thanks to all the growth it sees up ahead. 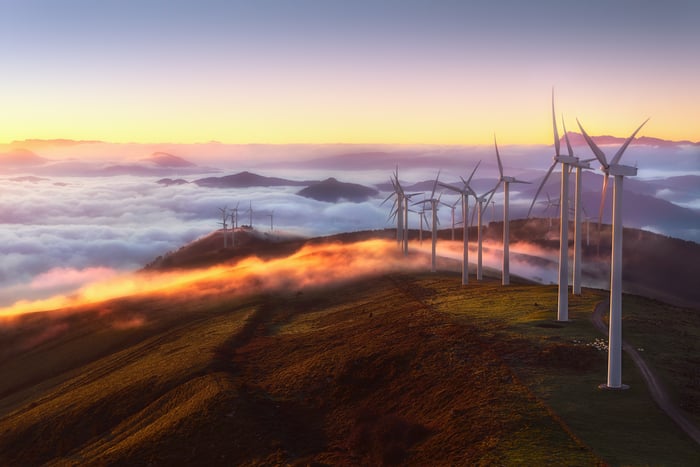 PG&E's bankruptcy filing in early 2019 threw a wrench in Clearway's dividend-growth strategy. The company initially anticipated that it would be able to grow its dividend by 5% to 8% per year starting in 2019. However, given the uncertain outcome of PG&E's bankruptcy proceedings, Clearway's lenders restricted access to the cash generated by assets that sold power to that utility. Because of that, instead of growing its dividend, Clearway had to reduce its payout by 40%.

However, with PG&E's bankruptcy in the rearview mirror, Clearway now has access to the trapped cash -- which currently totals $168 million -- and the future cash flows generated by these assets. Because of that, the company was able to reset its dividend at a much higher level. The new quarterly rate of $0.3125 per share implies an 81% dividend payout ratio at the company's expected cash flow run rate this year, which is toward the low-end of its 80% to 85% target range.

Clearway Energy also recommitted to its long-term dividend growth target of 5% to 8% per year and anticipates achieving the upper end of that range in 2021. Powering that forecast is the increasing visibility of its long-term growth prospects.

Clearway plans on putting its recently unrestricted cash -- as well as its sizable liquidity -- to work. The company previously agreed to invest $241 million into three wind project investments. It already closed one deal, purchasing the remaining interest in a wind repowering project from its parent Clearway Energy Group (CEG) for $70 million. It paid for that transaction by selling a portfolio of residential solar projects for $75 million.

The company expects to close the remaining two deals by the end of this year and 2021. Once those deals close, they'll boost the company's annualized cash flow run rate by about 10%, which will support next year's high-end dividend increase.

Meanwhile, the company has several more growth opportunities on the horizon. Earlier this month, Clearway agreed to acquire an interest in the Mesquite Star wind project from CEG. It would invest $79 million for 50% of the project's cash flow for the next decade. The company also received approval to build the Black Start Services project, which will cost about $19 million and generate roughly $5 million in annual cash flow once it starts commercial operations next year. These investments provide increased visibility for dividend growth beyond 2021.

CEG also offered Clearway the opportunity to purchase its remaining interests in the Kawailoa and Oahu Solar Partnerships and 100% of its stake in the Langford wind project. If they can agree on a price, these acquisitions would provide further power to support long-term dividend growth.

On top of that, the companies are working on a co-investment structure to support CEG's renewable development projects that are on track to start service in the 2021 to 2022 time frame. The company is also exploring some other development projects, as well as third-party acquisitions. Its success in securing these investments would enhance its ability to deliver on its long-term dividend-growth plan.

With PG&E's bankruptcy now in the rearview mirror, Clearway Energy was able to supercharge its dividend. Meanwhile, the company expects to put the cash that piled up to use on various investments, which will power growth over the next several quarters.

That sets it up to provide investors with another sizable dividend increase next year, with more upside in those to come as it secures additional investment opportunities. That growth potential makes it an ideal stock for dividend investors to buy and hold for the long haul.