The second quarter was the worst period ever for the energy market. Demand evaporated because of COVID-19, which caused prices to collapse. We even had a brief price war between OPEC and Russia. Conditions have been so brutal that a growing list of energy companies have filed for bankruptcy.

However, the sector seems to be through the worst of things as OPEC and Russia have made up and are now throwing their full support behind the oil market. Meanwhile, demand is slowly coming back as governments lift COVID-19 related restrictions.

Given this backdrop, we asked some of our contributors which energy stocks they think stand out as compelling buys this August. They chose Crestwood Equity Partners (CEQP -1.15%), Equinor ASA (EQNR 0.23%), and Helmerich & Payne (HP 1.34%). Here's why they think this trio could produce market-beating returns.

One for the adventurous investor

Reuben Gregg Brewer (Helmerich & Payne): U.S. onshore exploration and production (E&P) names have been pulling back hard amid low oil prices. That's left energy services providers like Helmerich & Payne reeling. Things are so bad that the company cut its dividend 65% after 47 consecutive years of annual increases. But Helmerich & Payne is a well-run company with industry-leading technology and significant market share. If it survives, it will be in prime position to prosper when demand for drilling services solidifies. 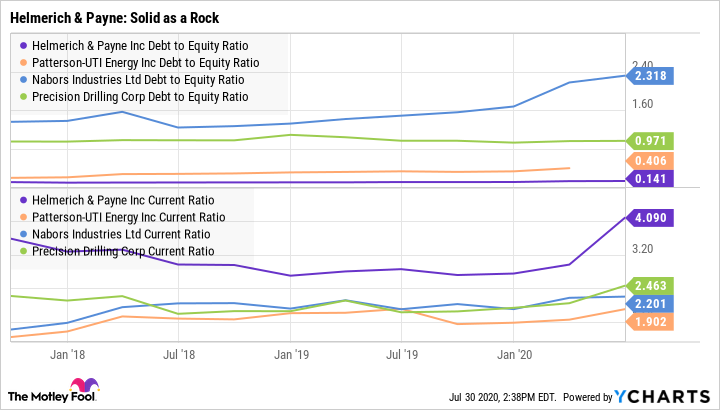 For those who can stomach a little near-term volatility, Helmerich & Payne's rock-solid balance sheet suggests survival is highly likely. To put some numbers on that, the company's debt-to-equity ratio (which measures leverage) of roughly 0.15 times is less than half that of its next closest peer. And its current ratio (which measures the ability to pay near-term bills) of about 4 times is materially better than all of its peers. In other words, Helmerich & Payne is both well positioned and likely to withstand the current headwinds. If you are looking for a turnaround play in the energy patch, this company should be on your list.

From oil to wind energy

Daniel Foelber (Equinor ASA): Equinor, formerly Statoil, is Norway's largest oil and gas producer. The company controls 70% of the country's oil and gas production. Although its current position is dominant -- and Equinor was able to achieve record oil and gas production in the first quarter of 2020 -- the clock is ticking. That's because Equinor's assets are mostly in the Norwegian continental shelf (NCS) of the North Sea, a mature oil field with decades of drilling and production behind it. Although Equinor has done everything it can to make those assets more efficient, it thinks that they will start to lose their profitability by 2030. That's why it's turning to offshore wind.

Offshore wind is a subcategory of wind energy that involves harnessing some of the world's most powerful gusts from the ocean. When depths exceed 200 feet, floating turbines are needed, giving wind energy the potential to work anywhere.

Equinor is so dedicated to its long-term future in offshore wind that it cut all of its onshore oil and gas drilling, cut its dividend by two-thirds, suspended its share buyback program, cut overall capital expenditures to $8.5 billion from an original estimate of $10 billion to $11 billion, and yet, kept its renewable budget the same. Equinor is a good option for investors looking for an oil and gas company with experience on the high seas and a first-mover advantage into a niche and new subcategory of wind energy.

A monster dividend that should survive this downturn

Matt DiLallo (Crestwood Equity Partners): Investors have bailed on MLPs this year due to worries about how much the oil market downturn will impact their operations. Among those hit hard by this sell-off has been Crestwood Equity Partners, which has seen its value cut in half. That pushed the yield on its distribution up to an eye-popping 16%.

Usually, when a dividend yield is in the double digits it's because the company can't sustain its payout much longer. However, that's not the case with Crestwood. The company recently reported better-than-expected second-quarter results as its cash flow rose despite all the turbulence in the oil market. Because of that, the MLP covered its payout by a comfortable 1.6 times.

Meanwhile, Crestwood expects market conditions to continue improving over the second half of the year, which has it on track to deliver results toward the middle to upper end of its guidance range. At the same time, it expects to spend a minimal amount on capital projects since it recently wrapped up its three-year expansion program. That has it on track to generate a substantial amount of free cash flow in the coming quarters, which will give it money to improve its already solid balance sheet.

With Crestwood's market value plunging 50% this year, it trades at an absurdly low valuation of around four times cash flow. That suggests it has lots of upside as market conditions improve. Couple that with its big-time yield and this energy stock could produce prodigious total returns in the coming years as the oil market gets back up on its feet again.