Please ensure Javascript is enabled for purposes of website accessibility
Log In Help Join The Motley Fool
Free Article Join Over 1 Million Premium Members And Get More In-Depth Stock Guidance and Research
By Keith Speights – Aug 8, 2020 at 7:14AM

There's an easy and emphatic answer.

Inovio Pharmaceuticals (INO -5.47%) has been sizzling in 2020. By late June, its share price had skyrocketed a whopping 860% year to date. Even though the biotech has since given up some of those gains, it's still up by more than 500% so far this year.

Most of those who have been holding it since before the stock took off are now sitting on impressive returns generated in a short amount of time. But is it too late for new investors to buy Inovio? 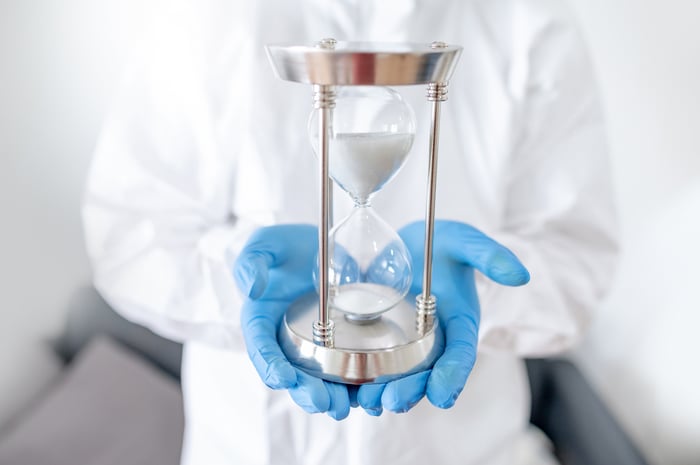 To answer the question, it's important to first understand exactly why Inovio's shares have delivered such a strong performance in 2020. There's one clear reason: COVID-19.

When concerns mounted early this year that the novel coronavirus might cause a global pandemic, several drugmakers quickly launched programs to develop SARS-CoV-2 vaccine candidates. Inovio was one of the first to do so. It was also one of the first to receive outside funding in support of its coronavirus vaccine program, winning a grant of up to $9 million from the nonprofit Coalition for Epidemic Preparedness Innovations (CEPI) in late January.

The biotech stock really began to take off in early March with management's announcement of an accelerated timeline for its COVID-19 vaccine development. The company said then that it planned to begin a phase 1 study of its coronavirus vaccine candidate, INO-4800, in April. Inovio came through on schedule, dosing the first patients in a phase 1 study of INO-4800 on April 6.

Inovio's shares enjoyed another big boost in late June thanks to a significant deal. The U.S. Department of Defense awarded $71 million in funding to the biotech to support the manufacturing of its Cellectra devices, which can be used to deliver DNA vaccines such as INO-4800 more effectively into people's cells.

Signs of a fizzle?

The sizzling share price gains of the first half of the year began to wane after Inovio announced interim results from its phase 1 study of INO-4800. Inovio reported that 94% of participants in the early stage study demonstrated immune responses at week six after receiving two doses of INO-4800.

Although the results for INO-4800 were positive overall, the interim update raised some questions. In particular, some observers wondered whether the company's COVID-19 vaccine candidate produced significant levels of neutralizing antibodies (which hold the potential to prevent infection by the novel coronavirus).

But the fact that the data readout lacked details about neutralizing antibodies doesn't necessarily diminish the prospects for INO-4800. Also, Inovio followed up in late July with results from a challenge study in non-human primates that demonstrated its COVID-19 vaccine produced protective both neutralizing antibodies and T cells (another important type of immune response) in rhesus macaques that lasted for four months after one dose.

Let's return to the original question: Is it too late to buy Inovio stock? I think the answer is an unequivocal no.

Inovio hopes to begin a phase 2/3 clinical study of INO-4800 this summer. It also has a phase 3 study of VGX-3100 in progress as a potential treatment for HPV-related precancerous cervical dysplasia. The company's pipeline includes several other promising clinical programs in phase 1 and phase 2 clinical studies.

If INO-4800 is successful in late-stage testing, Inovio will almost certainly have a blockbuster on its hands -- perhaps as soon as 2021. VGX-3100 and INO-5401 could together generate peak annual sales in the ballpark of $1.4 billion, according to H.C. Wainwright analyst Raghuram Selvaraju.

While I don't believe for one second that it's too late to buy Inovio, my view is that it's too soon to buy the stock. Why? It comes down to risk levels.

The probability of ultimate FDA approval jumps from around 16% for a vaccine candidate in phase 1 testing to roughly 74% for a vaccine candidate that successfully advances to phase 3 testing, based on historical data compiled by biotechnology industry organization BIO. Waiting for INO-4800 to begin phase 3 testing, therefore, dramatically improves your chances of winning by investing in Inovio.

INO-5401 is currently in phase 2 testing. The likelihood of an infectious-disease candidate going on to win FDA approval increases by 30% when it moves from phase 2 to phase 3, based on BIO's analysis.

What about VGX-3100? It's already in a phase 3 clinical study. However, that study isn't scheduled to wrap up until next spring. Inovio should have news about INO-4800 well before then.

You could buy Inovio stock right now. If all goes well with the biotech's clinical studies, you'll make more than you would by waiting. But there's a real possibility that all won't go well and you'll lose a bundle. Holding off at least until there's clarity about whether INO-4800 is a strong enough contender to advance into phase 3 testing should significantly increase your odds of making the right call with this stock.